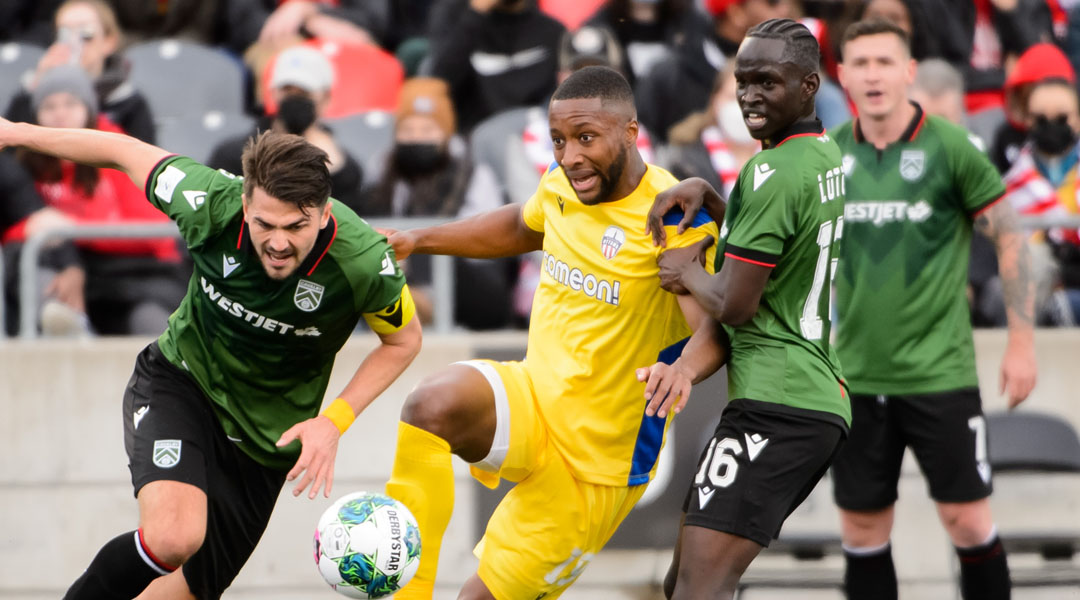 The Ottawa-based home side has historically proven clinical over the perennial CPL contenders, with tonight’s result seeing the all-time record between the two land Atletico Ottawa with four wins compared to just one for Cavalry FC.

The match saw a faster-paced Atletico Ottawa side look dangerous from start to finish, eventually breaking through via a spot kick at the tail end of the match. Just like in the season opener, the game saw a second half penalty precede a late game red card, too.

The new-look Atletico Ottawa helmed by Carlos Gonzalez featured no less than seven brand new players in its starting eleven, highlighted by the additions of former Barcelona prospect Ballou Tabla and York United’s former number one in Nathan Ingham. Across the pitch saw a Cavalry FC side with smaller tweaks, with Charlie Trafford donning the armband and German goalkeeper Julian Roloff getting the starting nod.

The home side got off to a bright start with Aleman firing a rocket that forced Roloff to rebound the ball right into Tabla, who pinged one off the crossbar just ten minutes in – what a start that would have been!

Cavalry’s Sergio Camargo would then go down in the box a few minutes later, but Stasolla would hand him a yellow for simulation rather than the penalty he was hoping for.

The first half looked promising for the refreshed Atletico Ottawa side, who won a flurry of individual battles and tested the Cavalry defense both from out wide and from build-up play in the middle – perhaps explaining why referee Fabrizio Stasolla handed out no less than three yellows to Cavalry in the opening 45.

The second half saw Championship veteran Joe Mason – now set for his first full season with Cavalry – nearly bagged a go-ahead goal in the 63rd, firing an in-the-box effort just wide of an outstretched Nathan Ingham.

The match opened up in that moment, with Atletico Ottawa top goalscorer Malcolm Shaw finding a close-range shot blocked moments later before a counter saw a seeking ball from Musse cleared before Camargo could head it home.

Mason would then ping off a close range volley that went wide of the net, with Tommy Wheeldon Jr.’s side rallying late to put more pressure on the hosts. The end-to-end action wasn’t done yet, however, with Shaw firing a low header straight into the waiting arms of Julian Roloff.

The home side would get a chance from the spot for a handball decision after substitute Jose Escalante was caught blocking a shot with his right arm. Brian Wright stepped up to the spot, firing the home side ahead ten minutes from time:

Ingham came up big for the hosts to keep his side ahead, denying Cavalry FC from a likely equalizer five minutes from the final whistle. Before the ensuing corner could take place, however, Atletico Ottawa captain Drew Beckie was handed a straight red for a foot stomp just four minutes from time.

The home side held firm for a solid three point start to the season, which proved an inspiring one: it was a strong team performance with several of the club’s new additions combining well. The result was a team which transitioned into attack much faster than it used to, and that should make them a much more competitive side going forward.

The hosts continue to be somewhat of a bogey team for Cavalry FC, who have only bested them once through five contests. After suffering four big preseason injuries, the club created some good chances and on another day might have finished them. With Roloff set for some minutes, it’s a good thing he looked solid in net.

“The referees call what they see, I’ve got no complaints,” conceded Cavalry gaffer Tommy Wheeldon Jr after the match, “I don’t think we deserved to lose, but we didn’t do enough to win.”