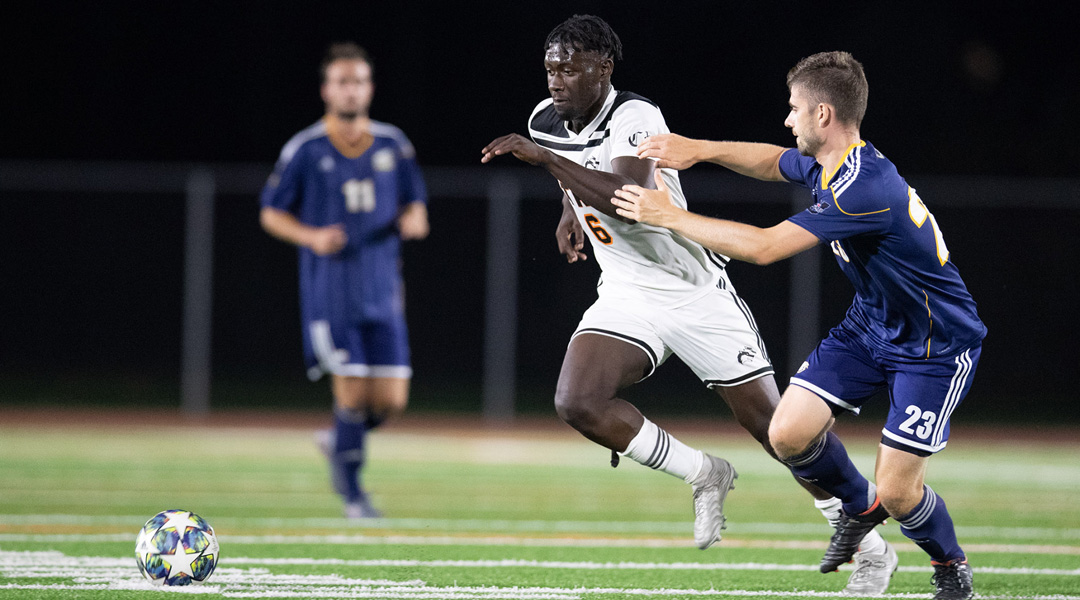 Atletico Ottawa’s first round pick in the 2023 CPL-U SPORTS Draft is raring to go.

It’s been a big year for Junior Agyekum, the 20-year-old midfielder who helped Thompson Rivers University win the U SPORTS Men’s Soccer Championship en route to an MVP tournament nod.

Having also participated in the inaugural League1 BC season with Rivers FC, this month saw the six-foot-one midfielder selected as Atletico Ottawa’s first round pick (eighth overall) in the 2023 CPL-U SPORTS Draft.

“Junior is a player with great physicality and brings balance to his teams,” stated Atletico Ottawa boss Carlos Gonzalez back on draft day. “He’s versatile and his capacities match really well with what we are looking for in a midfielder. We are well aware of the season he has had, an important piece for his coach and an MVP, who shows in every game that he has a competitive and a winning mentality which is what we look for in our squad and to improve our team.”

Speaking with Kamloops This Week, the midfielder described his draft selection – and the year overall – as a surreal experience. For TRU Wolfpack head coach John Antulov, who also helmed Rivers FC, Atletico Ottawa’s draft selection came as no surprise.

“I saw something special and pretty much jumped on it right away. Defensively, he’s a wall, he’s able to break up plays, has a non-stop engine, plays through injuries and has all the tools of size, quickness, and technical ability to go and attack. I was like, this kid is going to be really good.”

Junior says he has grown a lot under Antulov, who showed him a lot about the attributes he already had, and those which he still had to learn. Among one of those big changes this year was a focus on his offensive qualities, which is something that Antulov states CPL scouts inquired about when the U SPORTS National Championship kicked off.

“That was the part of his game that really drew attention. Once that started to show, it started to open a lot of peoples’ eyes,” reflects Antulov, who believes that Agyekum isn’t close to his ceiling yet.

The midfielder had a lights-out tournament in Kamloops, earning a Nike Top Performer in two of the Wolfpack’s three matches, picking up the championship MVP award and being quickly named to the tournament all-star team. Overall, he started 17 of his 22 matches for the Wolfpack throughout the nationals-winning campaign.

While Thompson Rivers University took home the U SPORTS National Championship title this year, Agyekum was the only member of the squad to be selected in the draft out of eleven eligible athletes. He becomes just the second overall draft pick from the university itself, with Jan Pirretas Glasmacher being selected by Pacific in the 2019 CPL-U SPORTS Draft.

While Jan didn’t jump to professional heights, Agyekum has aspirations of making the leap himself. The six-foot-one draft selection is expected to join Atletico Ottawa for a month-long training camp where he’ll fight for a contract, be it developmental or otherwise.

Having spent time with the Vancouver Whitecaps Academy, he’s no stranger to putting himself on display with a contract opportunity on the line.

“I’m just taking it one step at a time. Talk about full contracts usually appears later,” says Junior. “Right now, I’m just focused on doing well and making that first step. I want to take it as far as possible.”