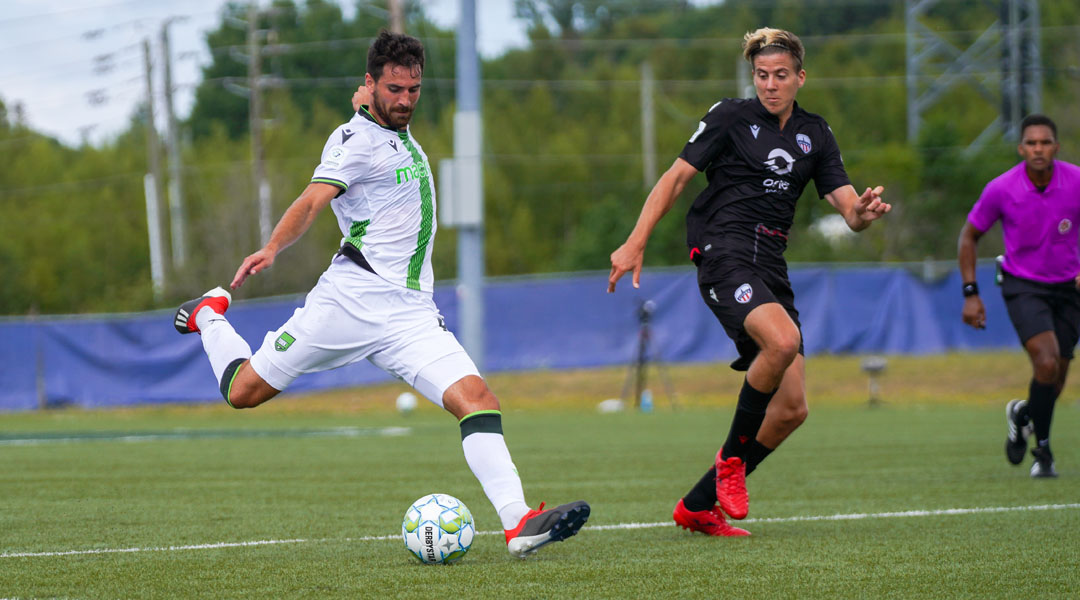 The second match of the 2020 Canadian Premier League season saw expansion side Atletico Ottawa fight to a 2-2 draw against York9 FC, with Ottawa at one point having a two goal lead.

Atletico Ottawa took to the pitch for the first-time ever with a roster that many had questions about, but sharp combinations between the likes of Francisco Acuna and Vashon Neufville, Ben Fisk and Malyk Hamilton, and top-notch defending from Milovan Kapor would show that the expansion side were capable of good buildup, organized play and, ultimately, a competitive-looking roster.


The Nine Stripes saw newcomers Michael Petrasso, Chris Mannella, and Fugo Segawa all sidelined with injuries, along with team captain Manny Aparicio being dropped to the bench due to a heel issue. The side deployed with a 4-4-2, with former Wanderer Matthew Arnone returning to a defensive midfield role that he previously occupied with the York Lions.

The game started somewhat slowly, with both Joseph Di Chiara and Vashon Neufville going into the books at the 14th minute. Neufville proved to be dangerous on the wing, with the West Ham Academy product making multiple runs into the box. On the opposite end of the pitch, Telfer perhaps had the best chance for his side the opening half with a near-miss freekick, but the Nine Stripes would fail to convert any of its opportunities in the first half.

The last minute of added time would see history unfold on the pitch at UPEI: a sharp run from Vashon Neufville saw him cut inside the box, bursting beyond Telfer and Doner to deliver a low ball for former Halifax Wanderers man Mohamed Kourouma to fire home from a short distance. In Atletico Ottawa’s first half of professional action, the side had their first-ever goal and the lead against one of the tournament’s expected favourites.

The second half would see Atletico Ottawa continue their impressive start with a sharp pass from Ben Fisk finding Francisco Acuna in space, with the string-pulling midfielder running in close to deliver a quick ball for Malcom Shaw, with the striker quickly doubling the expansion side’s lead. Shaw had said that the goals would come, but few would have expected them to occur so quickly for the expansion side.

Minutes later, a second yellow (and thus a red card) to Vashon Neufville – which didn’t come from much, but he was already on a yellow – would see the expansion side forced to play without the influential left-back.Tactical changes would soon follow, with York9 FC handing debuts to youngsters Max Ferrari and Lowell Wright, and Atletico Ottawa bringing on League1 Ontario standouts Jarred Phillips and Maksym Kowal.

York9 FC would see its two youngsters combine in the 60th, with 19-year-old Max Ferrari slipping past the Ottawa defense to deliver a nice ball for 16-year-old Lowell Wright, who converted the shot to bring the Nine Stripes within touching distance of a draw. The goal would also make him the youngest goalscorer in league history.

Two minutes later, Phillips would bring down Joseph Di Chiara in the box to give the Nine Stripes a golden opportunity to equalize from the penalty spot. Having won the penalty, Di Chiara would then send Nacho Zabal the wrong way to equalize for his side as the wild second half continued.

Diyaeddine Abzi – who showed fancy footwork on he left wing as he advanced from his full-back position – would force Nacho into a great save as the match wore on, but neither side would ultimately find the net as the late-game action saw several players cramp up. This came as no surprise, given that many of the players last played a competitive game in October 2019.

While Atletico Ottawa dropped a two goal lead, the side will ultimately leave the pitch with their heads held high: they proved to be a competitive side, earned a hard-fought point in their debut match, and will now prepare to take on Rob Gale’s Valour FC this Wednesday.

Head coast Mista stated that he’d be appealing the red card handed to Vashon Neufville, too.


Meanwhile, the Nine Stripes will prepare to take on Pacific FC this Tuesday, though it remains to be seen if the 1:00PM EST match may be moved to an evening time slot to bring more eyes to the match.

With the first two matches of The Island Games having a four goal average, the 2020 Canadian Premier League season is off to an exciting start. The pitch at UPEI will be a busy one, with the Halifax Wanderers and Pacific FC kicking off in an hour. The match will be live on both CBC Sports and OneSoccer.