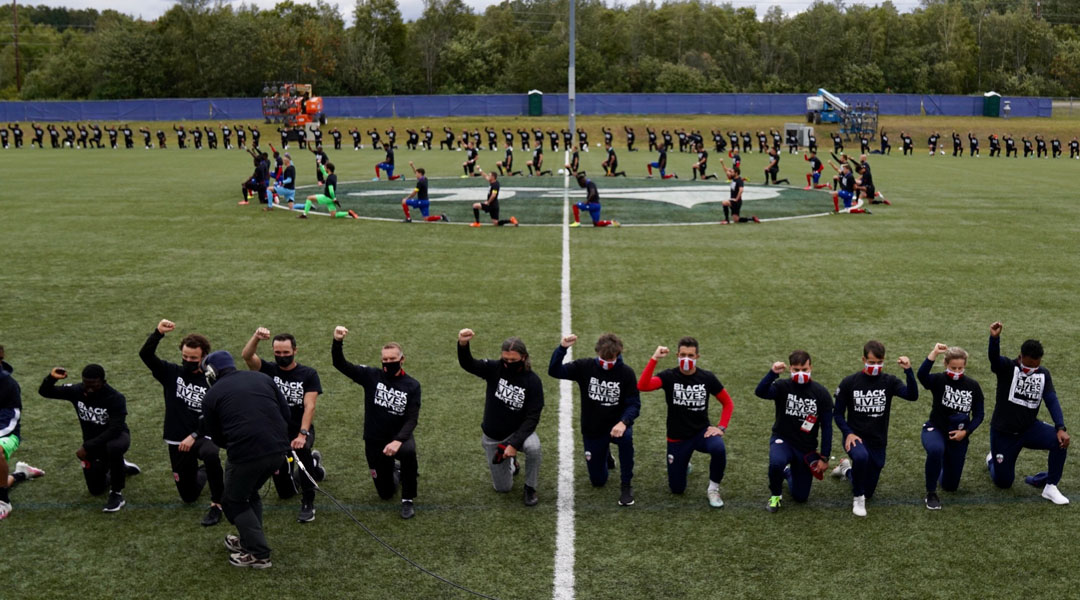 While some fans weren’t certain if this afternoon’s Canadian Premier League match would take place due to the massive sports boycott to protest racial injustice, both Atletico Ottawa and Cavalry FC showed up to UPEI Alumni Field to continue their Island Games campaigns – and with them came the rest entire league, making a strong statement about racial injustice.

The game itself saw Atletico Ottawa secure its first-ever win in Canadian Premier League history, with an opening goal from Ben Fisk and a truly memorable strike from Malcom Shaw securing all three points for the expansion side. Cavalry FC, in turn, suffered its first loss of the tournament.

Atletico Ottawa head coach Mista had no suspended players for his lineup tonight, with both Vashon Neufville and Milovan Kapor returning to the starting squad – though there were some changes afoot, with the formation sheet showing Kourouma out on the left flank and polarizing midfielder Javier Acuna pushed out to the right.

Cavalry FC fielded quite a strong starting eleven in a 3-5-2 formation, with Marco Carducci returning between the sticks and golden boot co-leader Jordan Brown starting up top alongside Brazilian forward Oliver Minatel.

As the two sides in action today kicked off, the rest of the league linked arms along the side of the pitch for the game’s opening eight minutes and 46 seconds – in reference to the time it took for the murder of George Floyd – before the game was paused as everyone both on the pitch and off took a knee once again.

The first half eventually gave way to a strange incident wherein the referee called a foul on Nacho Zabal, who saw his own goal kick fly back into his arms due to the high winds. Fortunately for Ottawa, after the referee consulted with the sideline official she undid her own decision with the expansion side getting away with a drop ball.

The relatively tame first half would see neither keeper particularly called into action often, though Elijah Adekugbe would see Zabal scoop up a good goalscoring chance in the first half’s dying minutes.

Cavalry FC captain Nik Ledgerwood won his side a freekick outside of the box in the last minute of the first half, with Mavila trying for a shot on target that went right to Zabal. Had the on-target effort gone in, it would have been the defender’s third goal in five games.

The expansion side would be the first team to strike blood, with Javier Acuna breaking free on the right flank in the second half to fire a low cross across to team captain Ben Fisk, who’s rough and low effort somehow found a way across the box and beyond Marco Carducci:

Moments later, Mavila nearly leveled for Cavalry FC when he chested down the ball in the opposition half, connecting well with a great effort that rose just beyond the crossbar.

An absolute goal of the season contender would then come from Malcolm Shaw – who said that the goals would come – with the striker confidently stirking a right-footed effort that caught the wind and looped perfectly above Carducci onto the top left of the net.

Mavila – who was really racking up the chances for a defender – missed a great opportunity to bring his side within one goal of an equalizer in the seventieth minute.

Golden boot co-leader Jordan Brown would see an effort fly narrowly wide in the game’s dying minutes, but the near-miss represented a good summary of the match for the league leaders.

Atletico Ottawa would see out the two-nil win to secure a historic first-ever win for the side, which now rises up to sixth place in the league table. As things stand, only three points now separate the expansion side and second place as the Island Games tournament continues to be a tightly contested affair.


Cavalry FC remains one game away from securing a playoff spot, with the Alberta-based side now resting at three wins, one draw, and one loss after five games played. They’ll square off against Pacific FC next this Sunday, with the match available on both OneSoccer and CHCH TV.

Expansion side Atletico Ottawa will now prepare for another tough bout against Forge FC due to take place on Sunday afternoon. With Mista’s side perhaps proving a point today, it’ll be interesting to see how they perform against the reigning champs.