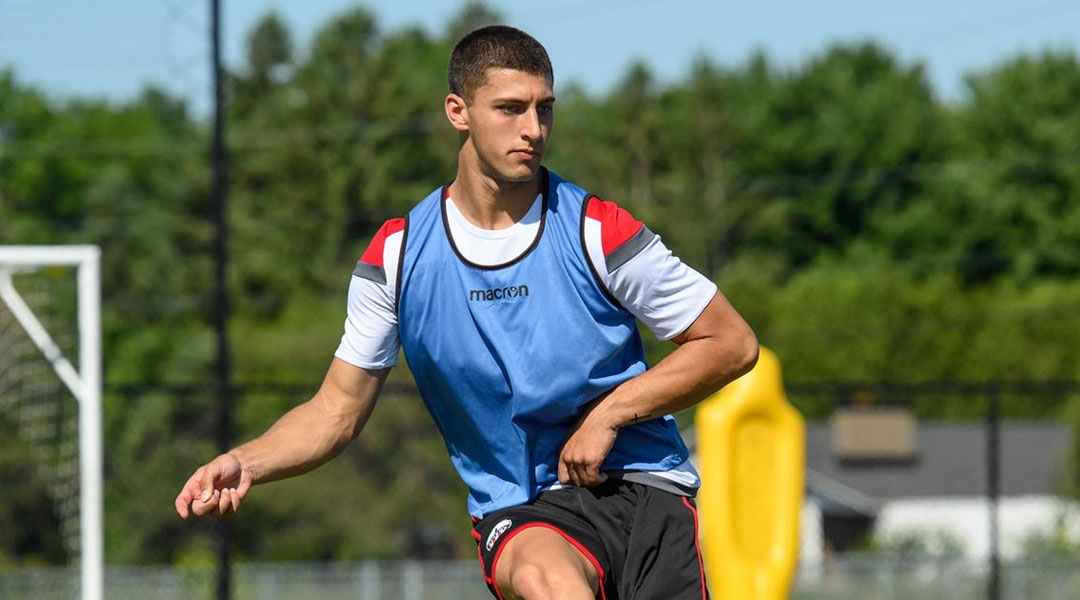 Grianfranco Facchineri signed a homegrown contract with the Vancouver Whitecaps this January, with the Canada U-17 Captain now arriving to Atletico Ottawa on loan until September 30, 2020. The 18-year-old is eager to get his first taste of top flight professional action, but he’s aware that the path to such an opportunity doesn’t come easily.

When Marc dos Santos pulled Facchineri aside and discussed the potential loan to Atletico Ottawa, the two quickly reached a consensus: this was a good move for Gianfranco’s career. At 18, he was the youngest centre-back on the Whitecaps roster, and would have been unlikely to get significant game time at the MLS is Back Tournament in Orlando. With Atletico Ottawa, he could continue his development and play at a good level in a first team environment. Once the idea had been brought forth, the loan became official very quickly.


Thus, the 18-year-old defender arrives as Atletico Ottawa’s second-ever centre-back after Brandon John. Faccherini enters the camp with ample pedigree, having impressed at the Whitecaps Academy level, where he won Player of the Year last season before being offered a homegrown contract this January. Still, the Windsor-born youngster doesn’t take anything for granted: he knows that he has to earn his spot under head coach Mista, and he’s already working hard to prove that he deserves the opportunity to collect first team minutes during the 2020 Canadian Premier League season.

You have to earn your spot everywhere you go. My goal here is to earn my spot and get as many minutes as I can with Ottawa to help the team and help the other boys as much as possible, because as soon as one player performs better, everybody plays better. Nothing is a guarantee, I’m not going to walk in and expect a spot to be given to me. I know that I have to earn a spot, and I will do everything I can to earn that spot to help the team, and for myself because I want to play. That’s where my headspace is at.

Facchineri states that training with the first-ever CPL expansion side has gone well, saying that he’s transitioned into the Atletico Ottawa setup fairly quickly. While Marc dos Santos and Mista have different playstyles and objectives, the youngster didn’t have any problem adapting to the new system and states that getting different outlooks on the game is simply another opportunity to aid his development.

Many players have touched on how fans can expect to see the side play, with English left-back Vashon Neufville describing the system as ‘proper football’ where the ball is played along the floor. In a more recent chat, Atletico Ottawa striker Malcolm Shaw revealed that the side aims to slow down the game as it retains possession. So far, Facchineri has been impressed by how Mista’s philosophy is unfolding on the training grounds.

Mista does try to play a good brand of football and he tries to instill that in us. He wants us to keep the ball, play, be patient, and it’s a good brand. I’m excited to play in it. It’s very similar in that sense to much of the tactics that we have at the Whitecaps, just be quality, have quality, and do the right things at the right times, make the right decisions.

When it comes to training, Facchineri is someone who seems to go above and beyond: he throws in extra workouts for himself on a regular basis, but when asked about them he says that it’s not about pushing beyond what is expected: it’s simply a driving desire to continually improve as a player. He’s already proven to be a tough, strong figure at the youth level, and he wants to take every opportunity he can to help his development as a professional athlete. Every drop of sweat, he’d said in another interview, is a step towards that improvement.


Growing up, the Windsor-born youngster found that opportunities within Ontario were difficult due to the significant drive between his home and Toronto, where a lot of the high-level youth development took place. Instead, Facchineri found himself in the US Soccer Development Academy system with Michigan-based Vardar SC before a short stint with the Toronto FC Academy and then, of course, the Vancouver Whitecaps.

It hasn’t been an easy road, but Facchineri has consistently proven himself at each new level he plays at: he spent a single season with the WFC Academy before being pushed up to the Developmental Squad last season, where he won the player of the year award ahead of earning his homegrown contract this January. Facchineri says his drive for success in football is something that never switches off.

Last year, Facchineri also co-captained the Canada U-17 squad at the CONCACAF Men’s U-17 Championship side alongside Whitecaps teammate Simon Colyn, with a then-17-year-old Gianfranco converting a penalty in the quarter-finals that sent the squad to the FIFA U-17 World Cup. In the latter tournament, Facchineri was named the outright Captain and led a young Canadian side that ultimately bowed out of the tournament’s group stage.

As one would expect, Facchineri describes leading his team in a World Cup as something he’ll never forget. While Canada went winless in a group against Angola, New Zealand, and the eventual winners in Brazil, the new Atletico Ottawa loanee says that the experience of playing in such a high-profile tournament helped him become a better leader.

You could see how different players react. You have to pick the players up during the game and as a captain, it’s your job and your responsibility to make sure that everyone has their head on straight and they’re onto the next task, even if we concede, so it was a great learning experience in terms of trying to teach me different leadership qualities and how to deal with different players differently, so those were experiences that improved my game and my leadership qualities in a great way.

Despite being Atletico Ottawa’s second-youngest player after Antoine Coupland, Facchineri says he wants to put his leadership qualities to good use in the nation’s capital, alongside club captain Ben Fisk. Should Facchineri rack up minutes in the modified season, fans can expect to hear him organizing the defensive line and communicating with all areas of the pitch.

You need a voice coming from behind you, and that’s kind of a role  that I’ve always found myself in or have been thrust in to. At this point in my career, it’s a role that I have to go and take, or go and get. The guys have been very inviting, and they listen, and they haven’t given ‘the young kid’ any problems. It’s been good so far. So that’s a role that I hope to look to take, despite being a young kid.

There’ll be plenty of eyes tuned in to see how Gianfranco handles his first professional season of club football. To that end, the Canadian Premier League has proven itself to be on John Herdman’s radar, with three CPL players from last season earning call ups to the national team (Marco Carducci, Amer Didic, and Tristan Borges).

With Facchineri captaining the U-17 side and the senior team having its own defensive woes, one never knows who may get an opportunity. The youngster recognizes that he has a lot of work to do, but made it clear that he believes a senior call up is certainly an attainable goal for him in the near future, so long as he keeps up with his developmental momentum.

I’m young. I’m 18. It’s obviously a dream that I have, and with the World Cup coming to Canada in the coming years that’s obviously in the back of my mind, but at the same time it’s also a goal that I see in the near future, hopefully, whenever that may be. There’s a lot of work to do, but at the same time I believe that it’s an attainable goal. That’s something that every young Canadian footballer hopes for, and it’s something that I’m looking forward to putting in the work to hopefully get myself there one day.

Faccherini’s loan runs until September 30, 2020, which suggests that the league expects the modified season to wrap up by the time October hits. When asked if an extension was a possibility in the event that the season ran late or Atletico Ottawa needed him for the Canadian Championship, the youngster simply stated he wasn’t aware of such information: he focuses solely on the football, with someone else taking care of the business side of the game.


Atletico Ottawa currently has sixteen players on its roster for the 2020 Canadian Premier League season, with head coach Mista expecting the club’s inaugural squad to top out at seventeen or eighteen players. The club has yet to sign any depth up top behind Malcolm Shaw, with Vancouver Whitecaps youngster Matteo de Brienne recently having trialed with the side. Still, it remains to be seen if anyone else will be joining Facchineri for the club’s inaugural campaign.

The 2020 Canadian Premier League season is expected to see each club play eachother once before a playoff stage, so Facchineri may not get too many opportunities to impress – or at least certainly not as many as he would have if there was no pandemic. Still, the 18-year-old is soldiering on and ready to make a statement with his loan move to Atletico Ottawa, and one suspects that he’ll certainly be one to watch for the years to come, too.