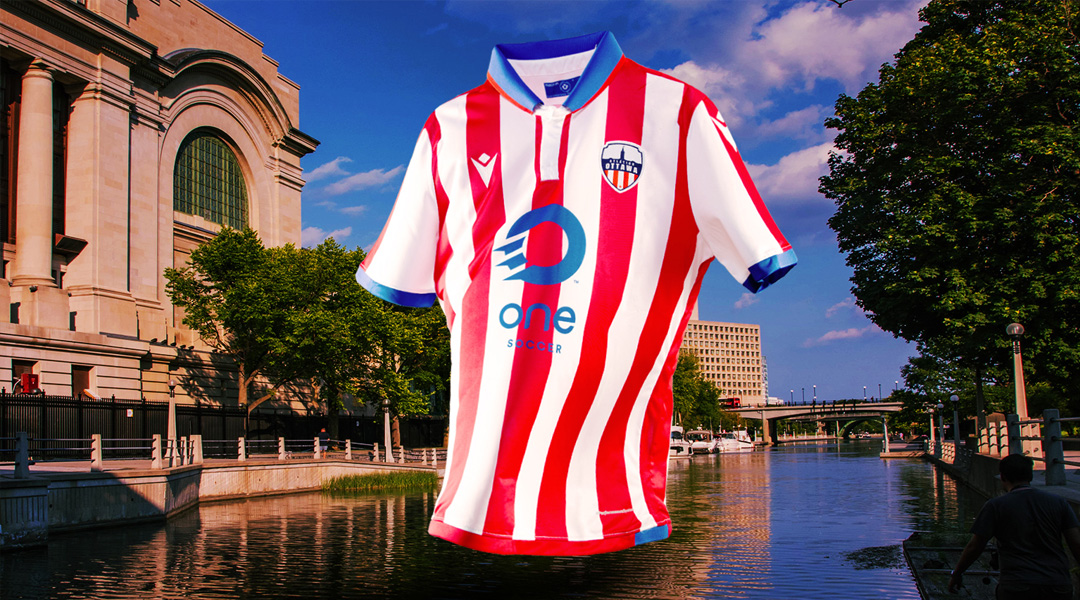 Without further ado, here’s a look at the club’s first-ever home kit:

The colours of the kit will come as no surprise to Atletico fans: the expectation was always a red-and-white look, which Clanachan himself alluded may have been one of the worst kept secrets in the league. The iconic look is complimented by a sharp blue collar and trim look inspired by the Rideau Canal, with the back of the kit featuring a large maple leaf insignia over a block of red.


The club – at least for its first season – will be sponsored by OneSoccer, with the media group’s logo also adopting the blue colour motif. The sponsorship should come as no surprise, given that OneSoccer is backed by Spanish media giant MediaPro, whose CEO has close ties to Atletico Madrid.

Fans interested in purchasing the club’s first-ever home kit can do so here.

The jersey means everything. It’s who you are, it’s what you battle for, it’s what you represent. It’s something that makes you feel inside of you that you belong to something big. It’s much more than a jersey. For Atletico, the jersey is a movement that fills your life. It’s a sentiment, it’s a family. This jersey is such a great representation of all of this, and all of the Atletico Madrid history, and our future in Canada. I can imagine what a player would feel wearing this jersey in front of our fans on gameday at TD Place. Just thinking about it, it gives me goosebumps. For those reasons and for us, it was very important that the home jersey represented Atletico’s identity, and the Ottawa and Gatineau region. That’s why we decided to insert neat details and graphic symbols that perfectly reflected the 117 years of Atletico’s know-how with the domestic soccer landscape and the future of the community.

Ben Fisk, who featured on the stream, stated that he fell in love with the kit as soon as he saw it, before describing that his prior experience in Spain let him see first hand how the Atletico Madrid identity represents humility, hard work, and teamwork. For the 2020 season, Fisk will retain the number ten kit for his new clubs and is expected to be a leadership figure for the expansion side.

The full kit will feature blue shorts and red socks, though CPL clubs have already shown themselves to be fairly flexible with short colours: York9 FC has worn both white and black with the away kit, while Forge FC originally went with all-gray and all-orange looks before divvying up the club’s 2019 looks.

Let’s talk about today. An incredible day for the CPL and Atletico Ottawa. I’m not sure if this is the best, or the worst kept secret that’s out there from an unveiling perspective, but I do know that there’s been a ton of speculation and a whole lot of guesses about what this kit could look like. To bring one of the world’s most iconic and successful soccer brands to the Ottawa-Gatineau area has been an absolutely honour for us, and it is for me, personally, a very personal proud moment as the Canadian Premier League’s first-ever expansion club, Atletico Ottawa, launches its inaugural kit. For those of us at the CPL, it shows our passion to grow the league and grow soccer in Canada.

If it hadn’t been for the COVID-19 pandemic, the Ottawa-based club would have already donned its home kits back in April during its first home game at TD Place. Instead, the club finds itself awaiting to see how the Canadian Premier League plans to instill a modified, shortened season that is expected to last 2-3 months long.


With plans to host the 2020 season in a single province becoming more concrete, the league has released a returning to training manual for clubs and players to follow. Today, Clanachan revealed that he’s hoping to see CPL sides return to training as early as next week.

While what history will unfold for the players who take to the pitch in the red-and-white striped kit remains to be seen, it’s exciting to see the first-ever full look of Atletico Ottawa as the club seeks to establish itself in the nation’s capital.