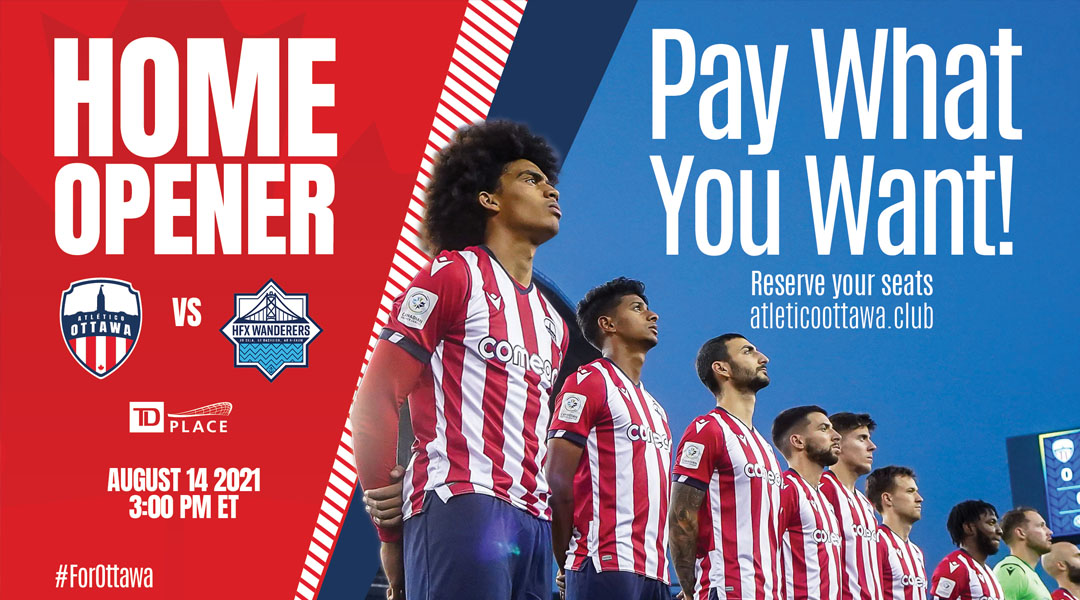 Canadian Premier League side Atletico Ottawa is set to play its first-ever home match on August 14, some 544 days after the club was announced. To celebrate the side taking to the pitch at TD Place for the first time, club ownership is doing something unusual: a pay-what-you-want home opener.

The historic home match against the Halifax Wanderers will see Atletico Ottawa permitted to host up to 15,000 fans at TD Place, with proceeds from its ‘pay what you want’ ticket sales going to the Youth Services Bureau of Ottawa, who run a range of programs for at-risk youth and their families.

Atletico Ottawa’s Strategic Partner Jeff Hunt, who has played a big role in the city’s sport scene, is looking forward to the momentous occasion:

The pandemic has affected all of us. Many of our neighbours, friends, and colleagues have had a tough year, but there is light ahead!. Saturday, August 14, we invite everyone to ‘Pay What You Want’ for your ticket to the Atletico Ottawa home opener and join us for this special return back to live sports and professional soccer in Ottawa.

Those interested in attending the match can select up to four tickets at no cost, with payment options coming in increments of $5 up to $50 per ticket – though doing so is optional.

The Canadian Premier League hasn’t seen an event like this since the league’s inaugural match, which saw Forge FC owner Bob Young celebrate the occasion by making all tickets free. It was a smart way to draw in curious eyes, and that’s likely what Atletico Ottawa is hoping for: local fans who will come back for more after enjoying the home opener.

The pay-what-you-want event prompted a comment from the city’s mayor, too:

Not only am I excited about the official return of professional soccer to the nation’s capital, I am proud of Atletico Ottawa’s generous initiative that will allow all fans to enjoy a thrilling live event at TD Place on August 14 all while supporting the great work of the Youth Services Bureau of Ottawa. This first home game at Lansdowne Park will be a great opportunity to connect with neighbours and friends in a safe environment, without having to worry about breaking the bank.

The Canadian Premier League’s eighth club will certainly be hoping that playing in front of fans in the stands will drive them to better results: the team left the bubbled start to the season at the bottom of the table, with two wins and one draw after a tough mentality test that ended with one of the wildest matches seen in league history.

With Spanish midfielder Albert Soto finally cleared to play for the team, the likes of Ryan Telfer and Jordan Webb set to rejoin the side, and the club in the midst of potentially bringing in another attacking option, it’s fair to say that the expansion team is certainly entering brighter days with the upcoming arrival of its inaugural home match.

Fans interested in acquiring tickets to the match can do so here.

The Top 5 Goals From The CPL’s Bubbled Start