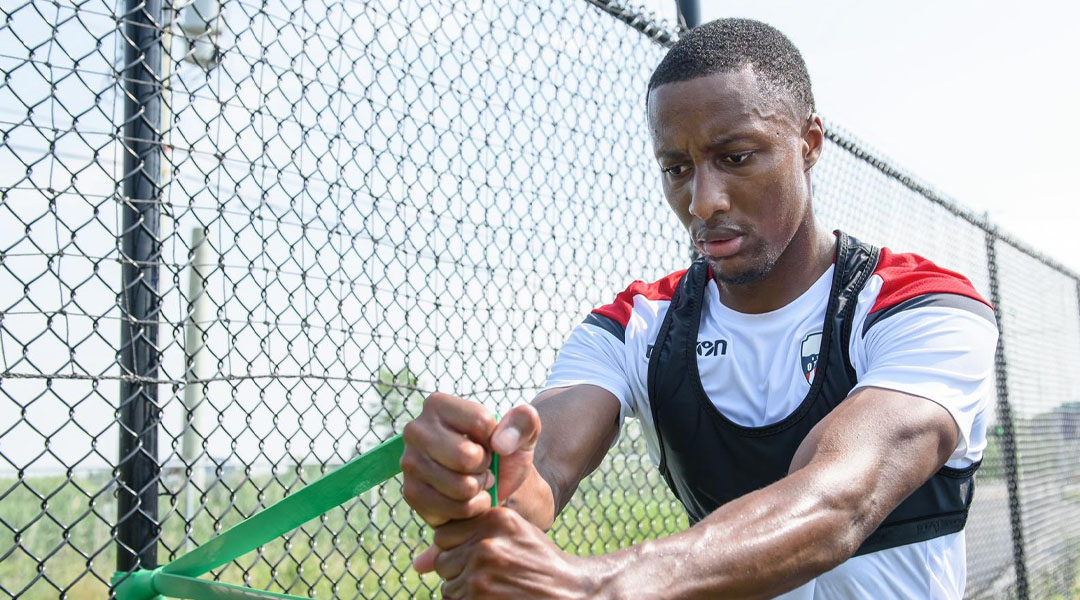 Atletico Ottawa had fourteen players on its roster before it brought in its first-ever striker following months of speculation about who could fill the role.

When Atletico Ottawa began a three-day teaser for this signing, fan speculation revealed an audience expecting a high profile domestic player like Simeon Jackson or, pre-pandemic, even a young loanee from parent club Atletico Madrid. In late June, the club revealed that it had signed Canadian forward Malcolm Shaw as the side’s first-ever striker. He arrived from the lower leagues of Sweden, and while he wasn’t the signing many had expected, Shaw is confident that his performances will quiet any doubts some may have about him.

My goal everyday is to come in and give my best and work hard for the club, work hard with my teammates and the organization. I want to represent the team and myself well. I believe if I continue to just commit to training hard everyday, getting affiliated with my teammates, and working hard for everyone, the goals and the success, and my overall performance, will take care of itself. I’m ready to be hard working, be coachable, and continue to learning. I’ll give my best for the club, and I believe if I continue to put forth that effort that the success will take care of itself.

Shaw arrives at a side with plenty of talent ready to feed balls to the final third: international midfielders Francisco Acuna and Viti Martinez have been in Ottawa since March, while domestic players like Ben Fisk, Gianfraco Facchineri, and youngster Antoine Coupland contribute to a strong team on paper. The club has no less than four full-backs capable of contributing on the counter, too. While he may not be able to enter Canada at the moment, Jamaican international Tevin Shaw (no relation to Malcolm) believes that the club can aim for a first place finish in its first-ever season.


When Atletico Ottawa does eventually take to the pitch, fans can expect to see a side that isn’t just going to hoof long balls up the pitch in the hopes of finding its new target man: as Vashon Neufville states, they’ll play ‘proper football’ with the ball on the floor. It’s here that Shaw’s tall and strong demeanor will have a big impact, allowing him to hold up play as his team transitions to attack:

In the Atletico system, we look to keep the ball and slow down the game a lot. At times for me, I like to play in transition on the counter attack. I need to consciously adjust the way I approach the game in this system.

In Sweden, Shaw proved that he make could runs while on the ball both in the box and out, and states that he enjoys running at defenders and creating opportunities with either foot. As he puts it, whether he’s shooting or crossing the ball, he’s eager to be part of the combination play in the attacking third. He credits his time in Sweden for evolving his tactical awareness, and that’s something he believes will make a big difference during his time in Atletico Ottawa.

The way I was coached in Sweden, a lot of it was with a tactical focus. I hadn’t been exposed to that level of tactical focus in my career, to be honest. I learned a lot in that regard, and it helped me understand the system of play more and different roles in certain systems. It helped me understand tactics a lot more, which was a positive thing. In the higher levels, you need to be able to implement and understand tactics, as well as having the ability to play at that higher level.

Born in Pickering, Shaw developed his trade playing regional football and eventually played at the NCAA Division II level, finishing with 27 goals after four years with Roberts Wesleyan College. He remained in the US to play with NPSL side Erie Commodores FC before returning to Canada and training with League1 Ontario side Master’s Futbol Academy. The club had connections with an agency which had Shaw participate in a few trial games, which is where Swedish fourth division side Raslatts SK first saw him ply his trade.

When the offer came to Shaw to trial overseas in 2018, he jumped on the opportunity and was offered a contract with Raslatts. After a successful year there, he made the jump to Assyriska – the current club of former York9 FC striker Simon Adjei – last season. The 2019 campaign saw Shaw contribute four goals and five assists in 24 appearances for Assyriska, after which he returned to Canada in the offseason with plans to join third division side Varnamo IFK this year.

It was less than a week before Shaw was due to return to Sweden that his transfer to Varnamo ultimately fell though, which left him with little time to find a new club before the 2020 season. He trained with a club in the US, but was required to pick up a US passport to be signed. Through his father, he was eligible for such and went to procure the papers, but then the pandemic struck and slowed down the bureaucratic process. His papers arrived beyond the deadline, his contract talks fizzled out, and Shaw returned home to train with Master’s Futbol Academy.


At that point in time, there was still some hope that the League1 Ontario side might participate in Canadian Championship action, so Shaw had been keeping tabs on the CPL ahead of a prospective fixture against York9 FC. Instead, the League1 Ontario summer season was nixed, the club’s participation in this year’s Voyageurs Cup was cancelled, and Shaw once again found himself without a solid plan for club football for the third time this year. He kept his head down, staying fit and training individually just in case something came up.

Out of the blue, an agent he wasn’t familiar with reached out to Shaw and let him know that Atletico Ottawa had been looking at him and was interested. A formal trial offer came, and Shaw spent the next few weeks in the nation’s capital. With Atletico Ottawa having been in the first phase of training at the time, it was a (hopefully) once in a lifetime experience for the 24-year-old:

It was a different kind of training to workout as an individual. They were actually harder than expected, with four guys on the pitch and the amount of space that we had with just one guy, there was a lot of running and a lot of sprinting and whatnot. Prior to that, nobody had been training or playing within a team environment for three months.

Shaw states he was thankful he had kept up with a tough fitness regime during the pandemic, and the club evidently liked what they saw: a few weeks later, Shaw was formally unveiled, even if he wasn’t the striker fans had been expecting.

He may be the only striker the club has officially signed so far, but Shaw is under no illusions: his spot as a starter – or where he goes on the pitch – isn’t locked in. He has experience on the left wing, which is an area he states he’ll be comfortable with if Mista ever puts someone else up top and opts to play him out wide.

Interestingly, the number nine is still available for Atletico Ottawa. Shaw ended up picking the number nineteen, and didn’t suggest that anyone else had laid claim to the number nine itself as of yet. In fact, his top kit number choice is twelve, but that was occupied by Michel Djaozandry. The number nineteen – worn by the likes of famous forwards like Mario Gotze and Dwight Yorke – is something he hopes to make his own as time goes on.

When that does happen, Shaw isn’t sure where he’ll be: he’s grateful for the opportunity with Atletico Ottawa, and likes the idea of continuing his professional career in his home country. While he wouldn’t rule out a return to Sweden or the US, he says he’s focused on giving Atletico Ottawa his best and, with that, says that he’s confident goals, performances, and success will come.

The Canadian Premier League is expected to announce its return-to-play in the next few days. It’s like going to take place in Prince Edward Island starting this August, with all eight Canadian Premier League teams playing eachother once before the top four sides move on to playoffs. Prior to this, head coach Mista expects a few more signings to become official.

It’ll be the Atletico Ottawa’s first chance to win silverware, with the club then competing in the modified 2020 Canadian Championship right after. For Shaw, it’ll be a golden opportunity to silence the doubters – but only time will tell how his first professional experience in Canada ultimately unfolds.