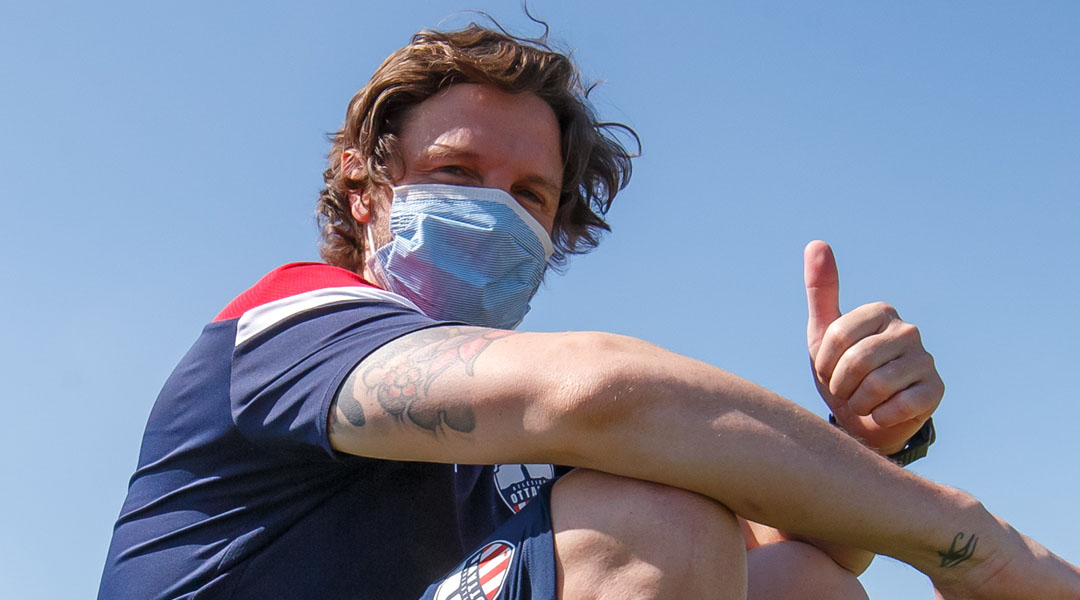 When Atletico Ottawa announced that Mista would be the expansion side’s first-ever head coach, it was the first time in years that he’d stepped foot back into Canada following a season-long stint with Toronto FC back in 2010.

Things are different now. For one, my conversation with Mista is happening in English. The Atletico Ottawa head coach has been taking an intensive language course and, evidently, the fruits of his labour are paying off as he navigates his first full interview in one of Canada’s official languages.

I come here, I need to try to learn your language. I want to try to the best of my ability, but I don’t know if my English is at the level yet.

It’s been a whirlwind few months for the 41-year-old: he mutually parted ways with the Rayo Vallecano academy to accept his first senior head coach role with Atletico Ottawa, then found himself separated from his family as the COVID-19 pandemic interrupted the expansion side’s preseason in Madrid, forcing the half-assembled squad to scramble back to Canada.

Despite the circumstances, Mista has entered the nation’s capital with both eyes open and has been conducting a thorough look at Canadian soccer. The landscape of the sport, he says, is much different than it was ten years ago when Mista arrived to TFC on a free transfer and current York9 FC gaffer Jim Brennan hung up his boots.

I think the people of Canada have more knowledge of soccer now. More children practice. You only need to see the academies, they are full. Having a league of their own like the CPL makes it easier for everyone to practice and compete, and get to know. With the World Cup here in ’26, it will be fantastic to make soccer a massive sport in Canada.

Interestingly, the former Atletico Madrid striker isn’t the only coaching staff at Atletico Ottawa with direct ties to Spanish side: the club’s physical strength and conditioning coach, Jose Oriol Setien, had been with Atletico Madrid since 2018. The CPL expansion club also looked to Spain for its goalkeeper coach, Jose Angel Oyonarte, who previously played in the Segunda Division with UCAM Murcia CF.

Rounding out the technical staff is assistant coach Fabian Troche, who Mista refers to as his right hand man. Troche stems from a more sports business background, being a certified player intermediary with some previous consultancy work, too. He speaks English, French, and Spanish, which evidently comes in quite handy for a club like Atletico Ottawa.


Mista’s first coaching opportunity came at Valencia, where he progressed through various levels of the La Liga giant’s academy system as a youth coach before leading the charge for the club’s top academy side in the UEFA Youth League. While it was a tough go for the side in the 2018-2019 season, Mista says it was a valuable learning experience for him.

Mista’s side has publicly signed fourteen players so far, bringing in talented internationals like Vashon Neufville, Francisco Acuna, and Viti Martinez, though international signings Tevin Shaw and Osah Bernardinho weren’t able to arrive in Canada before the borders closed. The club also brought in talented domestic players like Ben Fisk (who he confirmed as the captain), Brandon John, and 16-year-old youngster Antoine Coupland, among others.

With fourteen players on the books, Mista expects the club’s roster to top out at seventeen or eighteen players ahead of a shortened 2020 Canadian Premier League season that will likely be hosted by a single province.

We have continued to watch players to incorporate into our team. I think in the next few weeks, we were thinking to introduce everyone. I can say that this is practically very close, maybe to sign three or four more players.

Mista also teases that he doesn’t think it will take the club long to release news about a number nine striker. “Very Soon”, he says with a smile, though he refrained from giving any hints as to who it may be. In a separate interview with the league, Atletico Ottawa CEO Fernando Lopez stated that fans should expect a domestic striker signing within the next few days.


When the club was first announced, there was a spark of fan speculation that a marquee loan move from Atletico Madrid might be on the cards. While Atletico Ottawa does have a single international slot remaining, the pandemic appears to have stimmied any such thoughts. For his part, Mista thinks it’s a possibility for the future, but the club’s current recruitment focus is firmly within Canada’s borders.

Logically, being part of the Atletico Madrid family, we can benefit from this maybe in the future. But, we still want to focus on working for the people of Canada and Ottawa. We want some incorporation, but our goal should be to help Canadians get better, and we can improve together.

By signing the likes of Coupland, Hamilton, and Dada-Luke, Atletico Ottawa has already filled the league-mandated requirement of having three domestic U-21 players on its roster. League rules also stipulate that these players must clock in 1,000 minutes of cumulative game time throughout the season, though this number is likely to change if a shortened season takes place.

When the full squad does eventually take the pitch, Mista says that the club’s playstyle will echo that of Atletico Madrid. Fans can expect the ball played along the floor and a never-say-die, hard working attitude from players. It also means that the Atletico Ottawa squad will need to be comfortable on the ball in tight spaces, which is certainly easier said than done.


The Canadian Premier League expansion club is now the sole focus of Ottawa sports entrepreneur Jeff Hunt, who is working in tandem with Atletico Ottawa CEO Fernando Lopez to instill what the duo hopes will be a lasting legacy in a growing sports market.

It’ll be interesting to see what unfolds when Mista finally gets his chance to prove himself in his first-ever senior head coach role. The 2020 Canadian Premier League season is expected to kick off in either late July or August, with Atletico Ottawa also taking part in a modified form of the 2020 Canadian Championship after that, too.