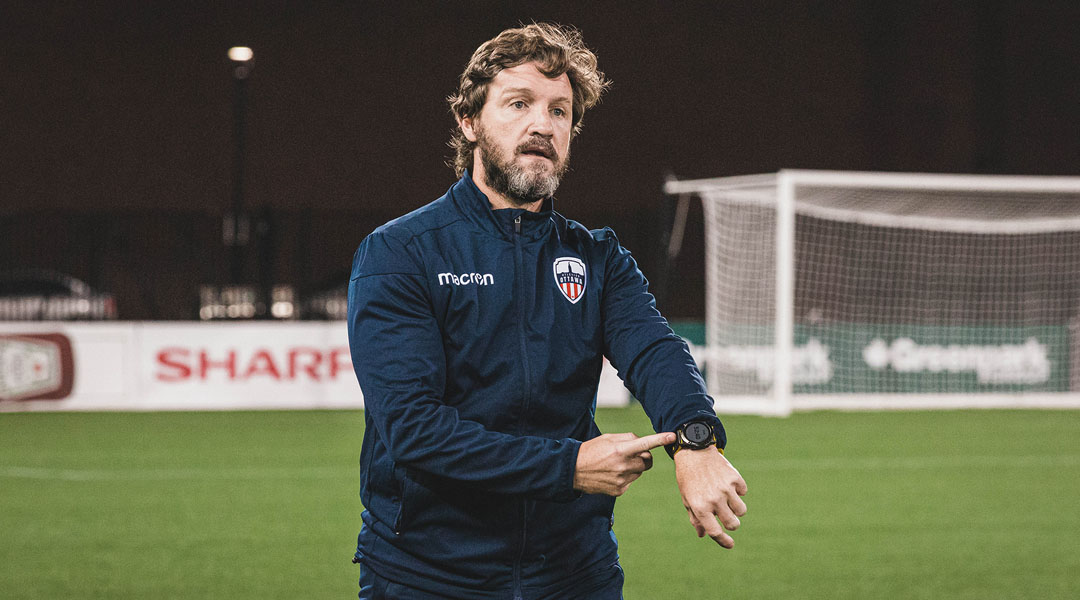 The Spanish head coach had spent the last two seasons at the helm of the CPL side, finishing second-last in 2020 and at the bottom of the table in 2021.

He now becomes the third CPL head coach to get a termination notice regarding performances in the 2021 season, with Rob Gale losing his position in September and Jim Brennan departing last month.

Mista’s departure had been reported by Thomas Nef a little over a month ago, with the Spaniard himself having revealed some uncertainty for his future during a press conference at the end of his second campaign.

Mista – who once played for Atletico Ottawa parent club Atletico Madrid, along with Toronto FC – was first announced at the expansion side’s official launch event. His coaching career began at the youth level with Valencia and Rayo Vallecano before Atletico Ottawa gave him his first coaching opportunity abroad.

What followed was a difficult time for a club that assembled itself quite quickly: a rushed entrance into last year’s Island Games left a lot of room for improvement, though anything more than that was always a big ask for a rookie head coach who was still learning the language at the time.

Despite the difficulties, Mista earned a Coach of the Year nomination following his first top flight coaching campaign. The club underwent plenty of roster changes that offseason, but a difficult year would follow.

The 2021 CPL season saw Atletico Ottawa become the first club to be mathematically eliminated from playoff contention, with the side having collected more red cards than wins at the midway point of the campaign, one of which went to Mista himself.

The tail of the season did see improved results following some surprising tactical flexibility from Mista, who hadn’t previously been known to shake up formations or dig deeply into the bench. Still, the end result saw Atletico Ottawa finish at the very bottom of the table.

Mista now departs with a record of 8 wins, 10 draws, and 18 losses with the side. It is unclear if Ajay Khabra or the Spanish contingent of the coaching staff will remain.

During what ended up being his final press conference as an Atletico Ottawa coach last month, the 43-year-old had left the door open for a potential departure: he noted that he hadn’t had a discussion with club brass at that point, stating “I don’t know what will happen in the future.”

Doubts regarding a prolonged stay grew when Atletico Ottawa remained quite on his contract status, whereupon last year the club had announced his contract renewal in November.

In a parting message to fans, Mista stated that the club had fought to the very end and that he was proud of the effort shown by the squad during his two-year tenure.

I want to take this opportunity to say something about the city and people of Ottawa. I love this city. You welcomed me with open arms. Everywhere I went, I was stopped by fans excited about this club and what they are building in the community. That work will continue. I have no doubt this organization will be lifting trophies in the very near future. I will be watching from afar and supporting them every step of the way. Thank you from the bottom of my heart. I’m honoured to have been a part of the early history of this club.

While the results haven’t shown on the field, Atletico Ottawa has received plenty of love from fans at TD Place, and club ownership will want to ensure that these faces will keep coming back in 2022 and beyond. With FC Edmonton struggling to draw a crowd despite comparable results on the pitch, a new head coach appointment was always likely.

While former Ottawa Fury and Vancouver Whitecaps head coach Marc Dos Santos told us that he wasn’t really looking at the CPL a few months ago, it’s worth noting that he did take in an Atletico Madrid match with Fernando Lopez last month, and this was followed by a private dinner hosted by the La Liga side afterwards.

Atletico Ottawa has been largely silent since the end of the 2021 CPL season, with Mista’s departure coming as the first big offseason change. In terms of the squad, Drew Beckie has already confirmed his return, while youngster Antoine Coupland has been trialing in Europe.