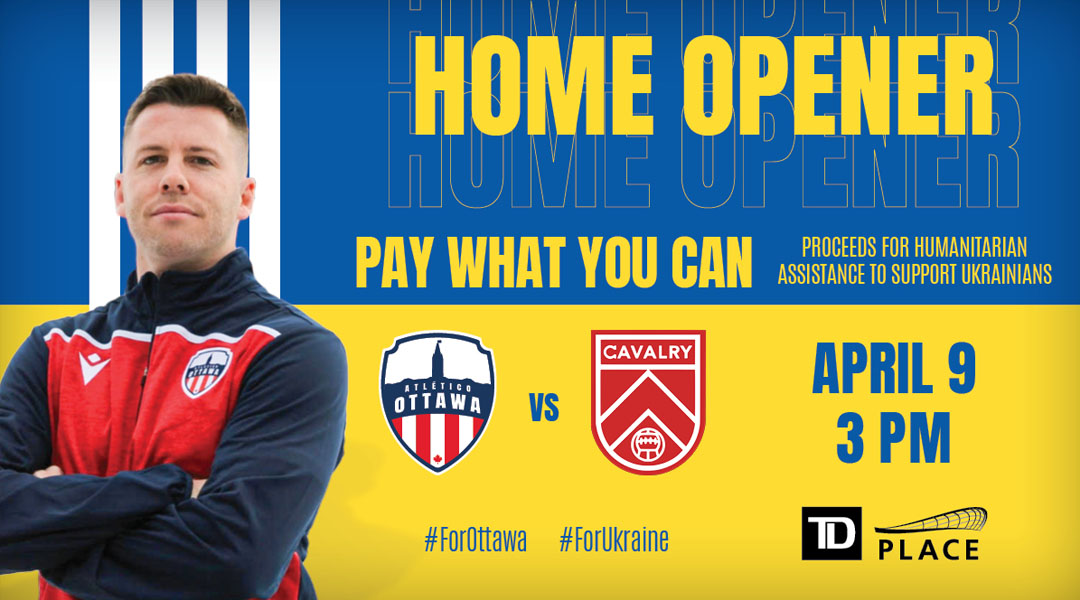 Atletico Ottawa Dedicates ‘Pay What You Can’ Home Opener To Ukraine

Atletico Ottawa’s home opener on April 9 will be a ‘pay what you can’ affair with all proceeds going towards humanitarian assistance in Ukraine.

In addition, the club will be donning a special tribute jersey that will see Atletico Ottawa take to the pitch in the traditional yellow and blue colours of Ukraine, with those jerseys then set to be auctioned off online via the Ukrainian Canadian Professional and Business Association of Ottawa following the match.

“Ottawa has a strong history of coming together to support those in need,” says Jeff Hunt. “Our community has done that in spades already. With this match, we want to encourage them to extend a helping hand, join us in celebrating the strength and resilience of the people of Ukraine, and get rewarded with a thrilling soccer match to boot.”

Atletico Ottawa’s first-ever home match was also a pay-what-you-can affair, which saw over 12,000 fans arrive to TD Place in order to watch a moment of Canadian soccer history. With proceeds going to such a good cause for the 2022 home opener, there’s hope that a similar turnout will come to cheer on the home side as it takes on Cavalry.

Ticket proceeds will be donated to the Ministry of Social Policy for Ukraine, where special funds for humanitarian assistance will be put towards food needs and accommodations for refugees and citizens of Ukraine who were forced to flee their homes following the Russian invasion. The funds will provide them with clothing, footwear, medicines, and medical equipment, along with other necessities and one-time financial assistance.

“I’m proud to support Atletico Ottawa’s generous initiative that will directly assist the Ukrainian government as well as refugees that have been displaced to Ottawa due to the ongoing war in their country,” stated Mayor Jim Watson, “Ottawa is home to a large Ukrainian-Canadian community, and this important fundraiser at Atleti’s home opener will allow the city to gather and celebrate Ukrainian culture and the strength of its brave people.”

Fans interested in purchasing tickets for the match can do so here. Additional donations can be made to the National Bank of Ukraine.

Atletico Ottawa is just wrapping up its preseason camp in Spain, where the club underwent multiple friendlies as a largely rebuild squad gelled together under the guidance of new head coach Carlos Gonzalez.

After finishing at the bottom last season, there’s a renewed sense of optimism after an offseason rebuild that several intriguing new faces arrive and Ottawa fan-favourite Carl Haworth return to the nation’s capital.