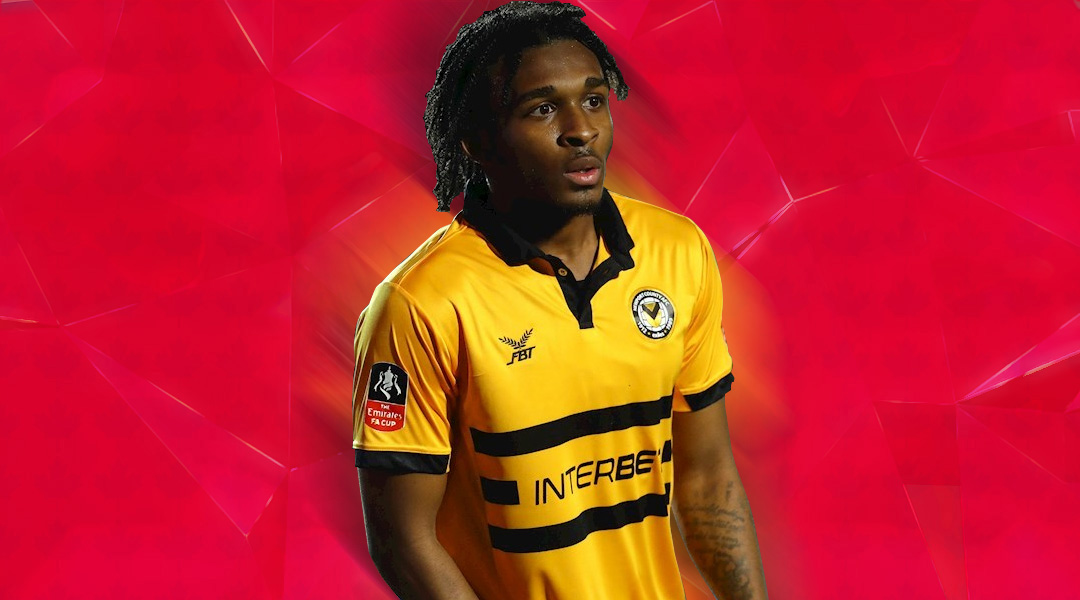 The 2020 Canadian Premier League season has brought a noticeable rise in the pedigree of players signing on with the young league: there’s been some Liga MX veterans, plenty of MLS academy products, and some real talent from overseas, too. Vashon Neufville is one of the latter: having spent his academy days with Chelsea and West Ham, the 20-year-old left-back has also represented England at the youth level prior to becoming the first international signing for Canadian Premier League expansion side Atletico Ottawa.

In 2019, Premier League side West Ham United loaned Neufville to League Two club Newport County, where he made an instant impact for the Welsh side: two days after his arrival and having only trained once with the team, he was thrown into an FA Cup third round bout against Leicester City, where he won the match-winning penalty courtesy of crossing the ball into the hand of Marc Albrighton. With the penalty converted by a teammate to secure a shock win, he described the night as an electric start to his professional career.


After that, things didn’t quite go to plan for the 20-year-old: his audacious start didn’t cement his place in the Newport County lineup, with an in-form Dan Butler earning the starting spot ahead of him. Two months later and with only one league appearance for the Newport County in the books, he found himself on the outside looking in at the League Two side. He spoke with his parent club about his situation, and both parties decided that Neufville was best back training at West Ham United.

When the season came to a close, the club which gave him his first-ever professional contract on his seventeenth birthday told him his time with the Premier League side would be officially ending.

It was okay. I wasn’t worried, to say, I know people would be, but I just knew if I just kept my head down and kept fit that something would come up.

The fact that he wasn’t worried didn’t mean he was unprepared: prior to the end of the season, Neufville spent two weeks training with Manchester City. In the preseason of 2019-2020, he spent time with a variety of clubs, including the likes of Brentford, Fulham, Crystal Palace, Watford, and Southampton. He even received an offer to sign with League Two side Colchester United, but he turned it down.


In early February, newly-minted CPL side Atletico Ottawa came knocking. Vashon says he’d always wanted to play abroad, and he had a few trusted sources to give him the inside scoop on the Canadian Premier League: he was familiar with Jordan Brown, Nathan Mavila, and Malyk Hamilton from their time in the academy system at West Ham. When the responses came back positive, Vashon and his family stewed on the offer for a couple of weeks, and put pen to paper near the end of February.

Like many Atletico Ottawa signings before him, Neufville was quick to recognize the impact that Ottawa’s parent club, Atletico Madrid, had in his decision to sign for the team. Beyond that, he’s a big fan of the Spanish game, and having Spanish coaching staff like Mista involved in the process was a big draw, too.

They’re a new team. It’s all something fresh for us. They’re owned by Atletico Madrid as well. The coaches are all Spanish too. I see in La Liga and stuff that they play football in a way I like to play, not just smashing the ball long.

While it’s not entirely true that the Atletico Ottawa coaching staff is all Spanish – Montrealer Fabian Troche is one of the coaching staff, after all – the idea of playing ‘proper football’ is one that resonates with Vashon, and something he was keen to emphasize: he’s not a fan of the long ball, hoof-it-up-the-pitch approach. He likes to play with the ball on the floor, with fast, purposeful attacking movement.

It’s something he says was especially instilled in him from his time playing at the England U-16 and England U-17 levels, where he made eight appearances for the latter side against the likes of Portugal and Italy. It’s also where he trained with players like Jadon Sancho, who he says is still the best athlete he’s ever played against, even if it was just in training.

The ‘proper football’ mentality is something that the 20-year-old says fans can expect Atletico Ottawa to replicate:

The squad is very good. A quick squad. We like to play football. We’re not the biggest, to be fair, but I think once we get the ball and the flow and we’re playing together, it’ll be a very good team.

Much like Atletico Ottawa signing Tevin Shaw, the youngster believes the league’s first-ever expansion side will put out a highly competitive team in its first season. The left-back was one of the squad members who took part in the club’s Madrid-based preseason prior to its suspension due to the COVID-19 pandemic, so he’s already met several of his new teammates.


Now residing in Ottawa and biding his time to see what may remain of the 2020 season, the London-born youngster says he’s adapted well to the squad.

I don’t think there’s that much pressure on us. I just think it’s a good opportunity for us because it’s a new team and we’re just learning to play with eachother right now. We’ve been with eachother for nearly a month now, and everyone – I just feel like I’ve known them for a long time now. I have no fear about us playing together. I think we’ll have a great first season, to be honest.

With fifteen signings now confirmed and all international roster spots utilized (of which Vashon was the first), Atletico Ottawa currently has an average player age of just under 24 years old, with only two recruited players over the age of 30. It’s certainly a young-leaning team, especially in defense, where the average age dips a few more years downwards. For the 20-year-old Englishman, this Pacific FC-like ‘trust the kids ‘process is a big positive:

I like it, to be fair. A younger team, I think, it’s good. It’s good to have experienced players as well, but for them to be able to trust us younger players, it gives me a lot of hope that they find younger players and they like to see the youth play. It’s something I’m excited for.

Atletico Ottawa has already signed three other full-backs, with Kunle Dada-Luke expected to slot into the right, Michel Djaozandry providing depth for either side, and utility youngster Malyk Hamilton also capable of slotting in as a full-back. The back line will also feature former Orlando City B centre-back Brandon John, too.

Atletico Ottawa had described Neufville as a full-back who could beat opposition defenders in one-vs-one situations, and Neufville says his dribbling skills are a key highlight of his game, too. He still has some homework to do on his opposition, with his knowledge of the young league still limited to word-of-mouth from his former West Ham colleagues and a good-looking level of play from highlight reels:

I watched some of the highlights from last season. That’s about it. I haven’t seen any games or anything. Everything is new to me still.

Recognizing that the Canadian Premier League is an export league, Neufville declared that he has long-term ambitions beyond playing in Canada’s only domestic professional league. He’d like to break into Major League Soccer or Liga MX prior to an eventual return to England, where he’d like to play at a higher level than the League Two contract he was offered earlier this offseason.

Proving himself at the Canadian Premier League level would be a good way to start.


Still, it was his debut for League Two side Newport County that remains his favourite footballing memory so far: his professional debut in a cup tie against Leicester City, and being the one to win the match-winning penalty. It was an electric feeling, he says, and it brought emotions he’d like to see come from his time in an Atletico Ottawa kit, too.

With details regarding his contract status still unknown, it’s not clear how long Neufville will be playing abroad in Canada. Whatever happens, the former England U-17 left-back is ready to prove himself. He’s hoping to stay fit, healthy, and to start for Atletico Ottawa, compiling his first-ever season of first-team appearances at the professional level.

Coming from great pedigree, it’ll be interesting to see how the 20-year-old performs under head coach Mista this season, whenever it starts.