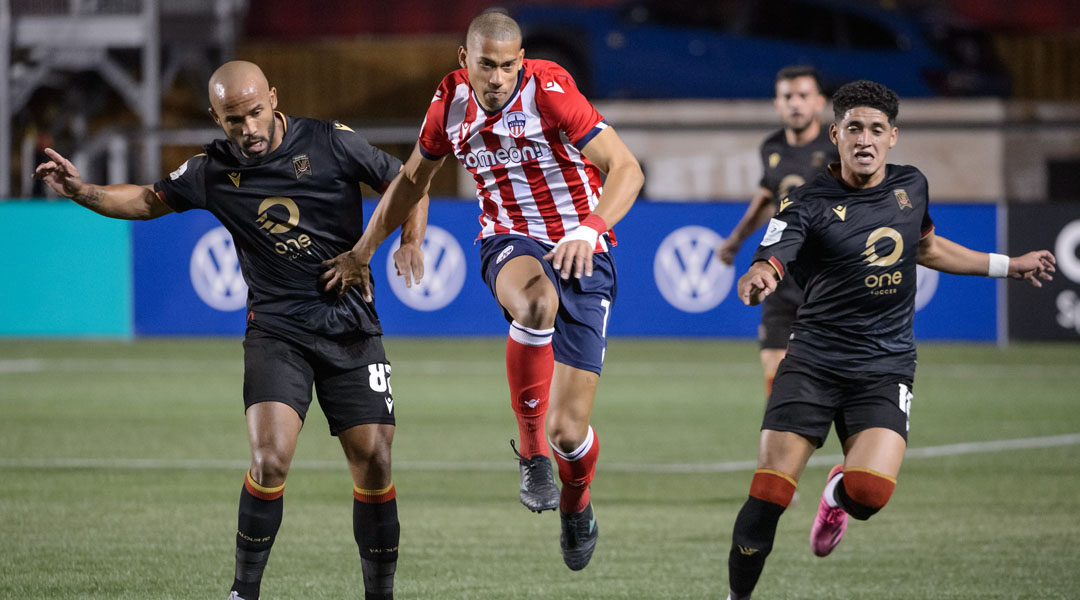 Atletico Ottawa may be eliminated from playoffs, but the expansion side is still having a big impact on the race itself: last night, the club’s first-ever victory over Valour FC last night has put a serious damper on the Winnipeg-based side’s playoff aspirations.

The result also sees Atletico Ottawa rise up from the bottom of the table, with FC Edmonton dropping into the rear with only a handful of matches left in the season.

Goals from top Ottawa goalscorer Malcolm Shaw and Trinidad and Tobago international Ryan Telfer secured a big home win for the expansion side, with Valour FC finding itself unable to hit the back of the net despite firing 26 shots throughout the match.

Atletico Ottawa goalkeeper Dylon Powley made several big stops to secure his third clean sheet of the season, and his first since the Winnipeg bubble. Making the feat more impressive is the fact that the side were without defenders Drew Beckie and Vashon Neufville, who were unavailable through suspension.

Valour FC – who had bested Atletico Ottawa in all four previous meetings between the two sides, scoring ten goals and conceding none in that time – now finds itself on the precipice of its own playoff elimination. Depending on the upcoming week of action, the Winnipeg-based side could be out of the race by next Wednesday – and it almost certainly needs to win its three remaining matches to pry the coveted fourth-place spot from Halifax.

Given that next Tuesday will see Valour host the Wanderers, it’s looking like a tantalizing, do-or-die match for both sides: a home win for Valour would go a long way for their desperate dive at a playoff spot, while a win for Halifax would crush Valour’s playoff hopes entirely and help the east coast side hang tight to a second consecutive postseason berth.

The Valour FC board had made a big, brassy decision in replacing head coach Rob Gale with first-time head coach Phillip Dos Santos midway through the season, with the turnover coming after the side dropped from first to sixth place following the first month of league action. Dos Santos is still getting his feet wet, per se, and has seen the side collect one win, two draws, and four defeats since his arrival.

Atletico Ottawa will close out its season out with matches against both Halifax Wanderers and York United, meaning the capital-based club is in the perfect position to play spoilers:

While the expansion side has faced a difficult campaign overall, Mista’s side has now collected seven points from its last five matches for a decent return of 1.4 points per game. If it had done that throughout the season at large, the club would be sitting in fourth place right now. A strong finish will go a long way in securing Mista’s position at the club next season, too.

In any event, the Ottawa-based side struck a near-killing blow to Valour’s playoff ambitions last night, with the playoff race now seeing Halifax and York United emerge neck-and-neck as big favourites for the spot with four games to go. It’s going to be a wild finish for the fourth and final playoff spot.