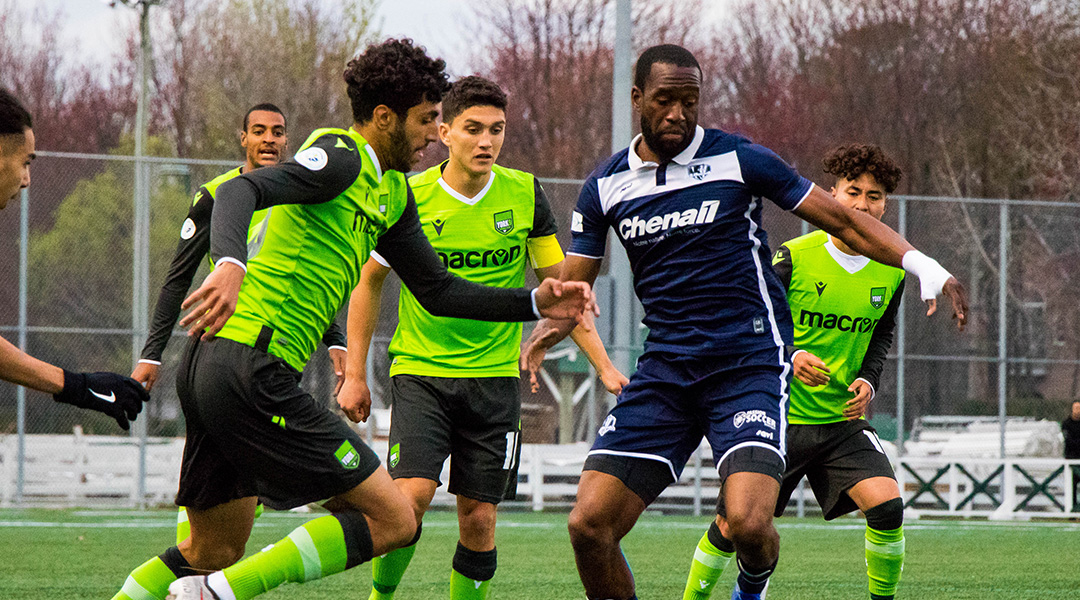 Having successfully defended its PLSQ title last season, AS Blainville once again earned itself a spot in the Canadian Championship qualifying round. The tournament has drastically expanded for the 2019 season, with spots for all seven Canadian Premier League squads now being included.

Last week, AS Blainville hosted newly-formed Ontario side York9 FC at Parc Blainville, marking the first time PLSQ and Canadian Premier League sides faced one another. The first leg saw York9 FC dominate possession, but a resolute Blainville defense (and a solid outing for goalkeeper Erwann Ofouya) limited scoring opportunities and kept things to a 0-0 draw. The Montreal-based side came closest to breaking the deadlock, with a great effort from Pierre-Rudolph Mayard striking the crossbar.

When we asked if he could reveal any information about what fans can expect to see later today as AS Blainville takes on York9 FC at York Lions Stadium, head coach Emmanuel Macagno revealed that the reigning PLSQ champions won’t be going for a draw:

If Mayard had scored [in the first leg] it would have been different, but currently for a chance to qualify he will have to score because we can not afford to wait for the penalty shootout.

It’ll be a tough match for AS Blainville, but it’s fair to say that they’ve played well so far against fully professional CPL opposition. Last week, experienced players like Wandrille Lefèvre (a former Impact player who has three caps with the Canadian national side) and Pierre-Rudolph Mayard (who spent time with with both the NASL-era Impact and the Ottawa Fury) looked capable of making game-defining moments.

For coach Macagno, however, it’s important to focus on the team as a whole. Last year saw the team defeat then-League1 Ontario champions Oakville Blue Devils 3-1 on aggregate (with now-York9 player Diyaeddine Abzi getting the away game’s only goal for Blainville) before bowing out to Ottawa Fury 2-0 in the next round. This experience, however, has been helpful to the squad as whole for their second run in the tournament.

This is important to play down the game and reassure those who need it. However, I think this year we are benefiting most from the experience gained in the Canadian Championship in 2018. I prefer to have 8 players who have lived in this kind of match rather than 2 very experienced players!

While the formation of the Canadian Premier League saw plenty of League1 Ontario standouts make the jump to professional play, the Première Ligue de soccer du Québec has been left relatively untouched by the seven founding CPL sides. While Emmanuel says that perhaps this will change with Montreal and Quebec City CPL sides on the horizon, it seems he’s focused on the task at hand rather than future speculation.

To that end, it looks like the club will continue to tightly mark the York9 FC midfield, a tactic which prevented the CPL side from finding space last week – and severely limiting service to the Nine Stripes forwards, with a late game scramble in the box being one of a select few scary moments for the Blainville defense.

I know [York9 FC] have a very technical environment and can keep the ball well. It is therefore necessary to prevent them as much as possible but it is very difficult because we must run a lot.

The midweek fixtures have meant a busy schedule for York9 FC, which will play its fourth game in two weeks on Saturday when Forge FC visits for the Nine Stripes’ Canadian Premier League home opener. Blainville faces a similar schedule, as they play against CS Longueuil this Saturday after executing what sounds like a very physical game plan for tonight’s Canadian Championship match.

Despite the busy schedule, Macagno says there won’t be much rotation when his squad returns to PLSQ play. Whether the squad that returns to Blainville will be in the next round of the Canadian Championship remains to be seen, but they’re certainly going to go for it.