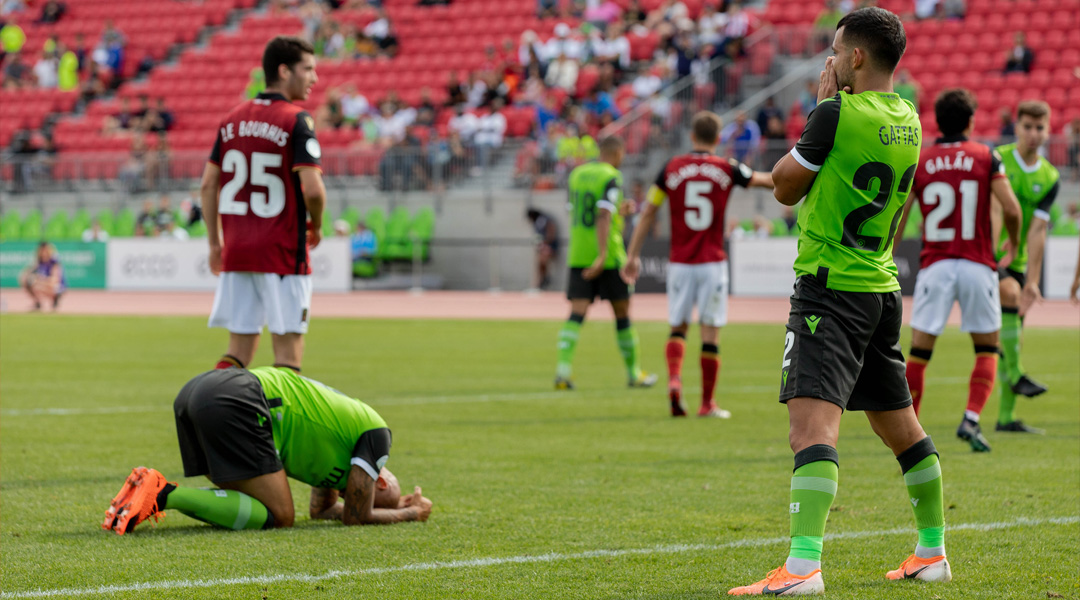 Prior to going on a two week break, York9 FC put an astounding six goals beyond the Halifax Wanderers. After that match, Brennan modestly stated that some days all the shots will go in, and sometimes they won’t.

Yesterday’s match against Valour FC was one of those other days.

Despite dominating possession and racking up an impressive 21 shots (eight on target), the Nine Stripes fell to a 2-0 home loss courtesy of a deflected shot from Michele Paolucci and a last-gasp goal from Michael Petrasso after York9 FC goalkeeper Nathan Ingham had rushed up to try and score from a corner.

For Brennan, a brief look at the scoreline doesn’t show the the full picture:

It’s a game we absolutely dominated, controlled it. Seven minutes in, a deflected shot gets in the back of the net and then after that the guys were on the front foot. We controlled it, we carved through them, we stuck to our game plan of how we wanted to play. We just weren’t lucky in and around that box.

The York Region club’s best chance came in the form of a penalty in the 67th minute. Chilean striker Rodrigo Gattas took the shot, but his blast down the middle was stopped by Belgian goalkeeper Mathias Janssens, who was then able to collect his own rebound. It’s a chance the Nine Stripes striker will certainly want back, especially when considering that Chile’s national team manager, Reinaldo Rueda, was watching the game in person.

We’re disappointed, absolutely disappointed with the outcome of the game today. Can’t fault the guys work ethic, I thought they were great today. The movement, possession that we had, the number of shots we had. 21 shots and we still couldn’t put it in the back of the net. It’s a disappointing result, but it’s something that we’ve got to move on now. We’ve got to start focusing on the next game next week.

It wasn’t quite Brennan’s regular starting lineup that took the pitch: the suspension of Manny Aparicio for yellow card accumulation meant that the Emmanuel Zambazis had another opportunity to play. The former York Lions player had to wait until the fall season to get his first start for the club, but Brennan has been impressed with how the 22-year-old has adapted to the Nine Stripes’ playing philosophy.


It’s the same philosophy that will likely be deployed against Pacific FC next week: Brennan didn’t see anything wrong with how his players played on the pitch, beyond the fact that they couldn’t get the ball into the back of the net.

I think we did everything right apart from that small third and finishing the game off. Look at that other side: they didn’t hurt us at all today. Not at all. I don’t think there was any point in the game where we felt that we’re under pressure here, or they’re going to cause us problems. It’s just one of those games that didn’t go our way.

Despite allowing five shots on target, the Nine Stripes defense looked in control but for a few brief lapses where the likes of Marco Bustos and Michael Petrasso carved out openings. Roger Thompson came off with a groin injury in the first half, with 22-year-old Daniel Gogarty coming on to replace him in the back three.


With this weekend’s loss, the club missed a crucial chance to make ground on Cavalry FC, who found itself denied three points at Wanderers Grounds during Peter Schaale’s last game for the East Coast club. A win would have seen the Nine Stripes go top of the table, but instead that spot now belongs to FC Edmonton.

York9 FC will have another chance to make up for lost ground next week when the club plays Pacific FC, a side which it has never lost against. As the Valour FC result shows, however, there’s a first time for everything in a league with plenty of parity.