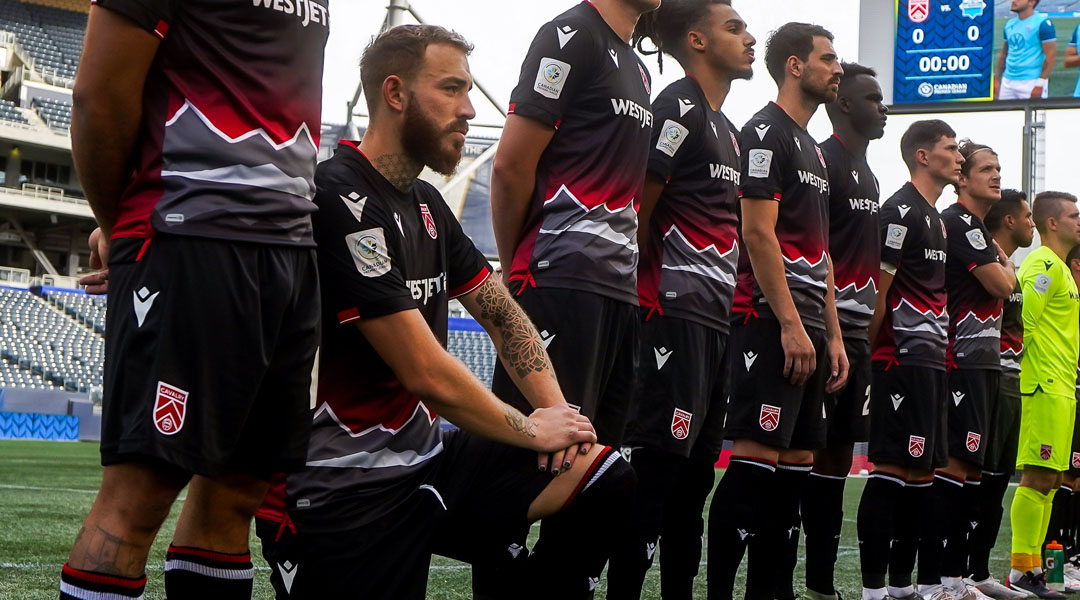 The Pickering, Ontario-born striker has been easy to spot in all of Canadian Premier League side Cavalry FC’s matches this season: he’s the one taking a knee during the national anthem, a personal choice that we recently spoke with the striker about.

While athletes kneeling has been a significant form of protest ever since Colin Kaepernick led by example in 2016, last year saw the majority of players across the globe do so in solidarity with the Black Lives Matter movement. For Novak – the lone Canadian Premier League player to continue to kneel in 2021 – this is one reason he continues to kneel, though it’s not the only driving force behind his decision.

Still, he takes inspiration from the movement Kaepernick sacrificed his sporting career for some five years ago:

He started the symbol to fight against system racism in his country, and the lack of safety that many African Americans have to experience on a day-to-day basis. With the CPL last year, we started doing it at the time not only as a symbol of solidarity for what had been started down there, but also for African Canadians and the fact that systemic racism is also present in Canada. It may not be as covered media-wise, but the fact of the matter is that it’s present here.

When there were talks of a possible league boycott in support of the BLM movement last year, the league’s players opted to surround the pitch during a match the following day, taking a knee and stopping the match at the time mark which represented when George Floyd passed away. It was a moment that really resonated with Novak.

One year later, the striker says that the discriminations and struggles he’s seen still make it ‘too close in the memory’ for him to stand in 2021.

The majority of my friends at home in Ontario have gone through struggles that I’ll never experience, and I’ll never truly understand, and I know there are old teammates, old friends, guys across the league that are African Canadian and choosing not to kneel, but I still have loads of friends back home I’m doing it for.

The second reason hits close to home for Novak, who’s wife is indigenous: the 1,600-and-counting bodies of indigenous peoples currently being found at the sites of former Canadian residential schools, with more likely to come. It’s a haunting, devastating number, and Novak struggles with the scope of how many children fell victim to cultural genocide from the church and government.

Those numbers are crazy to me, so the second reason I kneel is that this is also a very present issue. When Kamloops came out, it wasn’t too long before the CPL started, and the CPL also happened to kick off in indigenous month. I actually didn’t ask my wife what she thought about me kneeling. I just felt ‘how am I going to stand for something, a country that obviously doesn’t celebrate this, but has a dark history that is so current and present?

On the day we spoke to Novak about his decision to kneel, there were at least 160 bodies found at Kuper Island School, which operated until 1975. With the ongoing discovery of so many bodies, one of Canada’s darkest chapters is finally seeing the light of day, though the estimates of how many bodies remain are yet to be discovered is much higher than the 1,600 toll seen so far.

For the two aforementioned reasons combined, Novak found it hard not to kneel.

If I was willing to take a knee last year for my brothers and my friends, I should also be willing to do the same for my wife as well. She has family members who have been through that residential school system. There’s some kind of statistic that if you are indigenous and alive today, there’s a very high chance that you have a family member who has been through that system.

The 27-year-old striker is just recently married, and having an indigenous partner has opened his eyes to the treatment that many have faced in both past and present. When she watched Cavalry’s first match, his wife was surprised to see him kneeling solo, though Novak recognizes that it’s a very personal situation for him. In fact, if he hadn’t met and married her, he says, he’s not sure how emotional he would felt about the situation:

The amount more educated I am because of the fact that I’m married to her is astronomical in terms of what I know and didn’t know, just about things, culture, and lifestyle that is indigenous, and things I never had an appreciation for before. I know it means a lot for her, and I know we saw a lot of people not celebrating Canada Day. I know across a lot of indigenous mindsets right now it’s that ‘I might never stand for a Canada Day again, I might never party on a Canada Day again, I might never stand for a national anthem’, you know? That’s just how some people do it, and how at the time my wife and I were feeling. I don’t know how I could not.

When he first started dating his wife, Novak was very surprised about how much he didn’t know – and, as he puts it, not from her making any education lesson for him in any capacity, but just from being around her and experiencing her family and their thinking. He doesn’t recall being taught much by way of anything during his own education, with a lot of the things he’s now learned about having been glossed over in Canada’s education system.

As for whether there may come a time when Novak feels he may stand for the national anthem, the answer is yes – in facts, he imagines he will.

I want to be very clear: I’m very thankful to live in Canada, I’m thankful to play soccer for a living and that I have that option. I’m thankful for the high quality of life and all the experiences that I’ve had. Many people don’t have the opportunity to do this, and grow up in such a safe and nurturing environment based on where they’re born geographically. I’m thankful at the same time to be playing in Canadian professional soccer, and being a Canadian and having grown up a Canadian.

While it’s obvious that both the Black Livers Matter and Every Child Matters movement have struck a chord with players across the league, the outspoken striker doesn’t mind being the only one kneeling, either: after all, that’s the beauty of the freedoms we hold. It’s a personal choice, and he’s made his.

I just know that when I’m on TV, there’s my friends back home, my wife is watching, and fans that have these issues that are close to them. When I receive messages that it meant a lot to them, that’s the reasons I do it. I’ve received a few different messages from fans, and I know it means a lot to my wife as well.

The striker had spoken with both team captain Nik Ledgerwood and head coach Tommy Wheeldon Jr. prior to the club’s first gameday, so as to not catch them by surprise. He says they immediately had his back in the gesture, and have been nothing but supportive of his choice to continue kneeling during the national anthem.

Novak has always liked how the league pays homage to the indigenous peoples of Northern Canada through the soapstone carvings of the CPL Awards, and states that the CPL does a good job overall with important issues like the Black Lives Matter movement at The Island Games and the Every Child Matters movement this year.

I know it can be very easy sometimes for these things to be banged into the news and a bit forgotten the next day, and I think that’s just a symptom of the culture that we live in terms of the way the news cycles and in terms of the way our apps refresh. We have so much access to so much going on at all times, but I like that the league is trying to keep the focus on some of the issues that we’ve taken an extra yard in trying to protest.

Suffice to say, Canadian Premier League fans can likely expect to see Anthony Novak keep kneeling for a good while yet – especially with more bodies still being discovered on a horrifyingly regularly basis.

The Canadian striker has played in all six of Cavalry’s matches so far, contributing two assists against Atletico Ottawa. He’s known for producing some acrobatic goals at important moments, though his first goal for Cavalry is yet to come. Still, he’s enjoying his time with the club, in a league that gives him the freedom to protest in his own way.