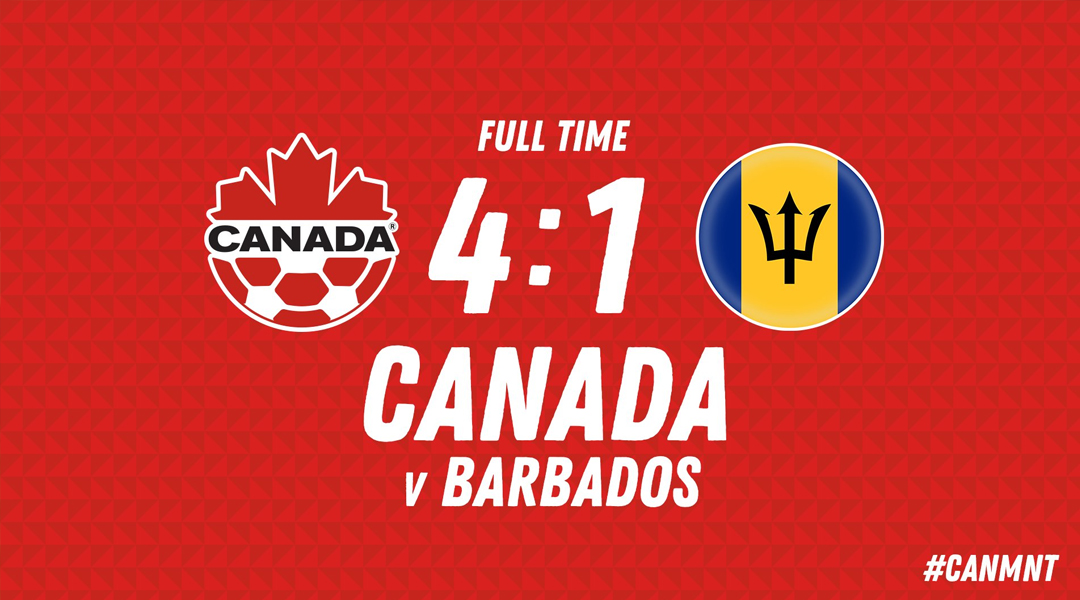 Canada has played its first of three friendly matches scheduled for its US-based January camp, beating Barbados by a score of 4-1.

While the international friendly wasn’t available to watch on OneSoccer, the following two games against Barbados (again) on January 10 and Iceland on January 15 will be available on CanadaSoccer.com.

Given that the match took place outside of the regular international window, head coach John Herdman is relying on several young call-ups for the three fixtures, with a record three Canadian Premier League players being called into camp. No CPL players made their debut today, with only goalkeeper Marco Carducci ultimately making the teamsheet as an unused substitute. Given that James Pantemis was also on the bench ahead of him, there was little chance he’d get to make his debut.

While the starting roster fielded a handful of players in their mid-twenties, Herdman would bring on several youngsters as the match progressed.


The side was captained by Samuel Piette for today’s friendly, and it only took the squad seven minutes to take the lead over Barbados: after dribbling beyond two defenders, Jonathan Osorio slotted in a beautiful through ball for Tesho Akindele, who fired an effort that struck the post. Thankfully for Canada, veteran national team member Tosaint Ricketts was there to slot home the rebound:

While Jay Chapman would strike the post minutes later, there would be no rebound goal that time around. Still, Chapman would rack himself up an assist in the 34th minute, heading a ball to Tesho Akindele to turn and fire a shot into the back of the net:

Just one minute later, however, warning signs for the Canadian defense flared up again as the team gave away a penalty to Barbados, though it wasn’t stated who committed the foul. Barbados forward Armando Lashley converted the strike to make it 2-1, taking away Maxime Crepeau’s clean sheet.

Chapman – who recently left Toronto FC for Inter Miami CF – would strike the post once more in the 37th minute after Barbados goalkeeper Kishmar Primus was able to get a partial block on his shot. Undeterred, Chapman would play provider for a second time by leading the ball to the line and sending in a low cross for his former TFC teammate Jonathan Osorio to rifle home from within the box, ensuring Canada finished the first half with a healthy 3-1 lead.

The second half would prove less eventful, with Herdman making several substitutions as the clock ticked on. Shamit Some, Charles-Andreas Brym, Jayden Nelson, Noble Okello, and Theo Bair all made their national team debuts as substitutes in the second half.

Bair, who came on as a substitute for Liam Fraser, took just two minutes to score on his international debut by firing home a close rebound after a shot from the Charles-Andreas Brym fumbled away by Barbados goalkeeper Kishmar Primus.

The score would finish 4-1 in favour of Canada, who did what was expected of them: Canada were the significant favourites going into the match even with a young roster, though the fact that that the country still couldn’t keep a clean sheet may be cause for concern – while Canada’s offensive talents have grown exponentially in the last few years, it’s fair to say that its defensive performances haven’t typically matched up.

With one win down (and a slight uptick in FIFA points due), it’s expected that Herdman will rotate his squad ahead of the friendly replay against Barbados this Friday. Whether that will lead to a first-ever national team debut for a Canadian Premier League player remains to be seen, though it wouldn’t be surprising to see any of Marco Carducci, Amer Didic, or Tristan Borges get some playing time in three days’ time, as it’ll be less likely they’ll feature against Iceland.


Securing results in the three friendlies will help Canada edge closer to re-entering the hex, home of the top six CONCACAF nations. When it comes to 2022 World Cup qualification, Canada finding itself in the top six will go a long way in terms of simplifying its route to the World Cup.

Whether it can secure those upcoming results against Barbados (January 10) and Iceland (January 15) remains to be seen, but there’ll certainly be plenty of curious fans tuning in to the Canada Sooccer website to see how the January matchups unfold via livestream.