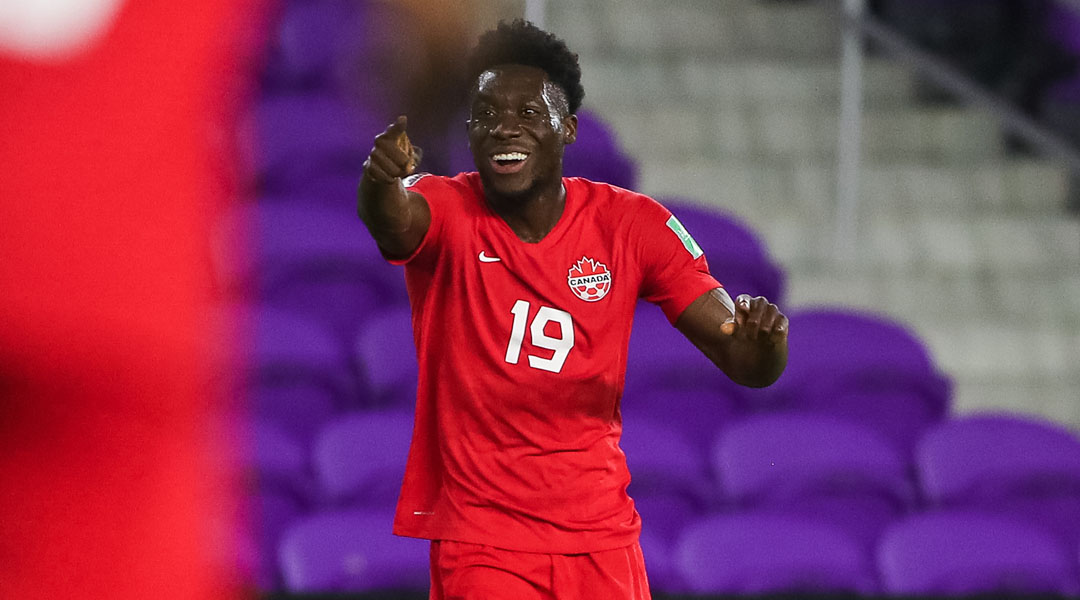 Canada kicked off its 2022 World Cup Qualification campaign with a comfortable 5-1 win over Bermuda tonight, with Les Rouges largely controlling the match at Exploria Stadium in Florida.

Head Coach John Herdman oversaw the return of veteran international Atiba Hutchinson, who rejoined the national team in a midfield role alongside Stephen Eustaquio, Junior Hoilett, and Alphonso Davies. Lucas Cavallini and Cyle Larin were deployed up top, with the latter often dropping back in a fluid system that also saw a lot of positional variance from defenders Samuel Adekugbe, Kamal Miller, Steven Vitoria, and Richie Laryea, with goalkeeper Milan Borjan making his fiftieth appearance for the national team.

Canada’s first chance of the game came just three minutes into the match with a Davies freekick finding Hutchinson, who headed a ball into the box before both an offside call and collision in the box halted play.

Another big chance came in the sixteenth minute, with Cavallini finding space on the right flank and firing a low ball that Bermudan goalkeeper Dale Eve was equal to, though the danger signs were there from the get-go.

The breakthrough goal came through an Alphonso Davies set piece in the nineteenth minute, with the 20-year-old lofting in a low freekick that met the head of Besiktas striker Cyle Larin to break the deadlock.

Following the go-ahead goal, Bermuda reminded Les Rouges not to take their feet off the pedal, working two balls into the box in quick succession, both of which ended without the isles territory capitalizing on either chance.

A lightning-fast Davies run on the left flank in the 27th minute saw him reach the ball just ahead of the rushing Bermudan keeper, with the Bayern Munich man delivering another quick ball to Larin in the box: this time the Besiktas forward took a few touches to control the ball in the box under pressure, firing low to the left to score his tenth goal for Canada.

Canada kept the pressure on after going 2-0 up, with Larin perhaps erring in passing a ball in what could have been a great hat trick opportunity. Moments later, a lofted pass into the box from Davies was missed by a Bermudan defender, allowing Cavallini to turn and shoot a close range effort that went just wide of the post. He’d strike the post seconds later off of yet another Davies cross.

Canada controlled the first half comfortably, with Davies particularly impressing with seven of Canada’s eleven key passes. He started off the second half equally well, firing in a low cross that lasered a parallel path to the goal that couldn’t find any Canadian attackers.

In the 53rd, Adekugbe sent Toronto FC full-back Richie Laryea on a deft diagonal run, with the fast-footed defender edging onto the ball and firing a right-footed shot beyond Eve, with his first goal for Canada putting the reds up by 3.

A fourth nearly came two minutes later, with a wonderful cross finding the head of Cavallini just in front of Eve, but the Whitecaps striker’s streak of bad luck continued as his effort went right into the keeper’s legs.

Against the run of play, Bermuda clawed a goal back after Borjan spilled an inbound cross down into the ground, with Watford U-23 product Kane Crichlow tapping in the loose ball for his first international goal.

Canada almost scored another with flourish after Richie Laryea pulled of a clever backheel in the box that put Holiet on the firing range from close range, but it wasn’t meant to be. Moments later, Davies once again beat the goalkeeper to the ball, but couldn’t deliver a final touch to reach any teammates for Canada’s fourth.

Canada made good on its next chance in the 69th minute, with Cyle Larin completing has trick from what was Alphonso’s third assist, which perfectly set up the striker with the goalkeeper caught rushing out – though he did get a hand to it.

Herdman then opted to hand Alistair Johnson his international debut in place of Richie Laryea, with Liam Millar coming on to replace Lucas Cavallini. The substitutions would continue to flow minutes later, with Theo Corbeanu, David Wotherspoon, and Samuel Piette all coming on.

Millar’s first shot would laser towards the top left corner of the net in the eightieth minute, with Eve proving up to the task of stopping the ball cold. Seconds later, however, Millar would fire in an absolute rocket of a cross to Wolverhampton youngster Corbeanu, who scorched home his debut goal as a result.

Corbeanu would finish his debut with a flourish, producing several bright touches as Canada saw out its victory over an under-strength Bermuda. Notably, all five goals came from players who spent time developing in League1 Ontario.

The 5-1 scoreline is right in the range one would expect from such a fixture, though there were a few minute warning signs for Les Rouges – still, with several MLS athletes still in preseason form, Canada’s road to the 2022 World Cup certainly got off to a good start against Bermuda tonight.

Canada will play its next World Cup Qualifier against the Cayman Islands at 3:30PM EST on March 28. The match will be available live on OneSoccer.