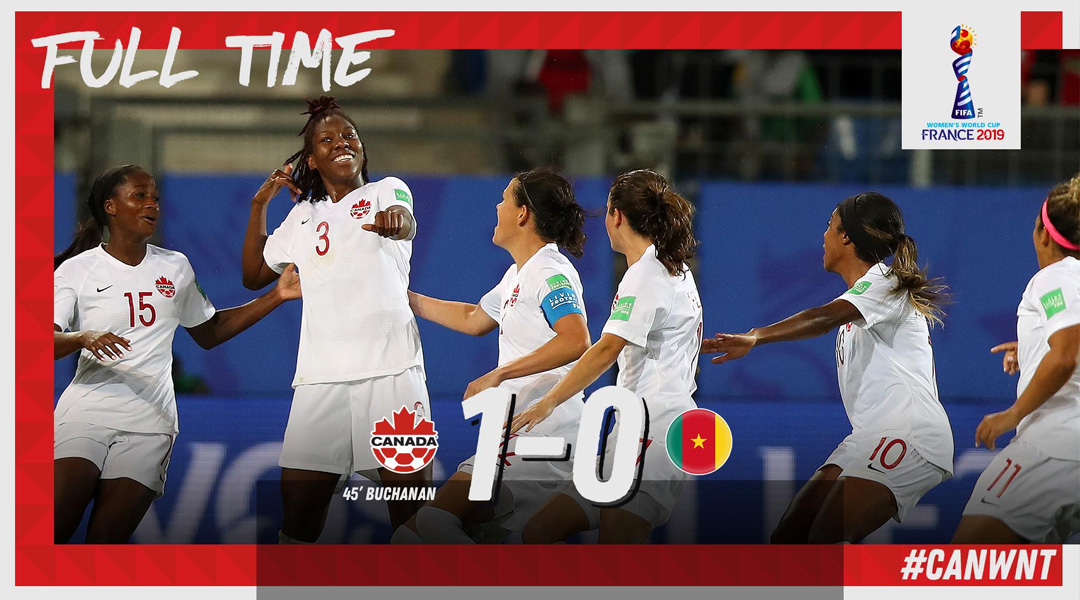 Canada’s Women’s World Cup campaign kicked off today against Cameroon, with the canucks securing all three points for the best possible start. A crowd of 10,710 attended the first game from Group F, which includes Canada, Cameroon, New Zealand, and the Netherlands.

Just before the half-time whistle, 23-year-old Kadeisha Buchanan connected from a corner kick to head home Canada’s first goal of the FIFA Women’s World Cup. Buchanan, who plays for Lyon, won Best Young Player at the 2015 FIFA Women’s World Cup when she was just 19 – and her next World Cup campaign is evidently off to a flyer, too.

The second half would see Canada continue to get the lion’s share of chances, with Nichelle Prince coming inches away from bagging Canada a second goal in the 60th. With Cameroon tightly marking Desiree Scott and Sophie Schmidt in the middle of the pitch, Les Rouges took advantage of space on the wing that resulted in several darting runs from fullback Ashley Lawrence.

In response, Cameroon made some like-for-like attacking changes in the hopes that fresh legs could make a difference. They then missed an almost-identical chance from Canada’s conversion in the 70th.

Deanne Rose would go on to make her World Cup debut in the 75th, replacing Nichelle Prince. Having played for Canada since she was 16, Rose has contributed 8 goals across 39 appearances for Les Rouges. A quick cross from Rose would find Sinclair late in the game, though the Canadian icon couldn’t convert on this occasion.

Sinclair would find herself called into action again in the game’s dying minutes, with a scramble in the Cameroon penalty box leading to a close effort being cleared from the line in the 89th minute.

It was a quiet night at the other end of the pitch for Canadian goalkeeper Stephanie Labbé, who only had to deal with one shot on goal through the game. She has yet to concede a goal in 2019. The match would finish 1-0, with Canada firmly in control for the duration.

Canada finished the match with 74% of the possession, marking an excellent start for head coach Kenneth Heiner-Møller’s side – an incredible feat for a country without its own domestic professional league for women. It’s something Heiner-Møller hopes will change in the future.

Canada will play New Zealand next on Saturday, June 15, before closing out its Group F action against the Netherlands on Thursday, June 20.