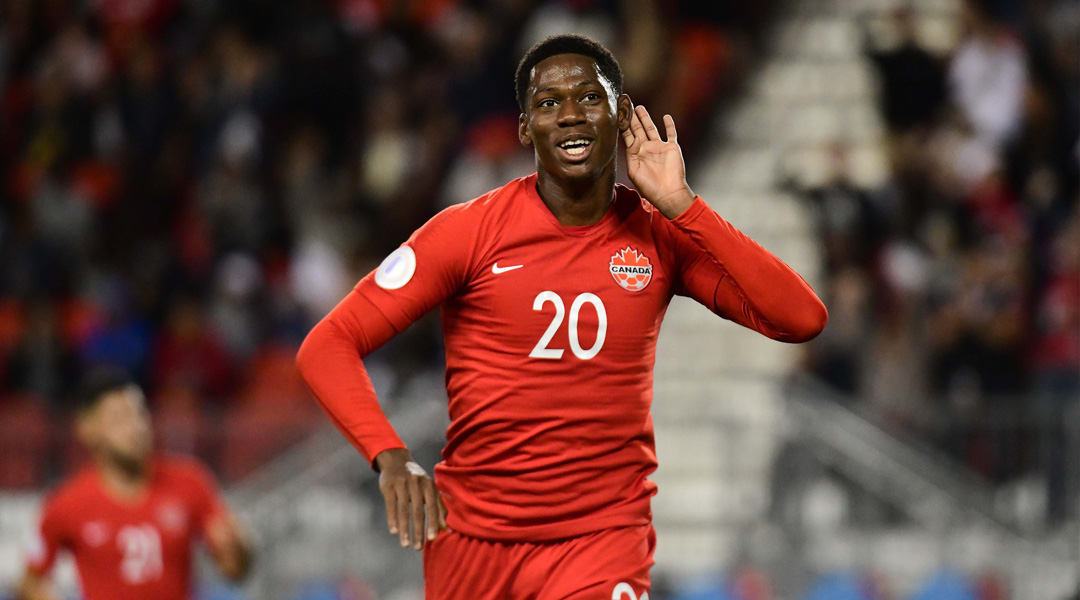 The floodlights at BMO Field provided Cuba with no place to hide as a dominant Canadian side routed the visitors in a 6-0 win that, ultimately, met fan expectation.

The Canucks had bested the Cuban national team 7-0 in the 2019 Gold Cup, so a similar scoreline was always on the cards as Les Rouges kicked off a CONCACAF Nations League campaign that will either drastically help or hinder its chances of qualifying for the Hex and getting a good foot in for 2022 World Cup qualification.


It didn’t take long for Canada to put itself on the scoresheet, with team captain Junior Hoilett slotting the ball home in the 13th minute. He’d go on to score a hat-trick in the goal-filled match, with Jonathan David, Jonathan Osorio, and Doneil Henry all getting a goal apiece before the final whistle sounded.

David’s goal, his eighth in eleven appearances for the Canadian national team, was a thing of beauty: he was on the receiving end of a pass from Mark-Anthony Kaye, so he flipped the ball in front of him with one foot, put himself beyond a Cuban defender, faked out another sliding defender, and then nutmegged the goalkeeper to score an absolute peach.

It’s no wonder head coach John Herdman calls the 19-year-old The Iceman: that level of composure is exactly why there are rumours that Gent has rejected six million euro bids for the youngster, who also took home the golden boot from this year’s Gold Cup.

Perhaps the best moment of the game itself, David’s goal also set a new Canadian record for most goals scored in a calendar year. His nine international goals also puts him just about halfway to Dwayne De Rosario’s all-time record of 22 goals scored for Canada, though if David’s goalscoring pace continues he’ll do it in about a quarter of the appearances.


As flashy as the goal was, it’s results that matter, and Herdman was happy to see his side retain focus for the entirety of the match – something that it didn’t do against Haiti in the Gold Cup, and something that Canadian icon Atiba Hutchinson said the squad would use as a learning experience.

I enjoyed the game. I enjoyed watching (the players) express themselves, and I think the fans enjoyed it as well. It was a good night. The players committed whistle to whistle, they didn’t lose concentration. The focus was there in all moments of the game, and that’s what I take the most pleasure from.

Canadian goalkeeper Milan Borjan was only really required once in the match, coming up big to make a save late in the first half when Cuba took advantage of a rare opportunity to counter. Borjan collected a clean sheet, with Canadian Premier League goalkeeper Marco Carducci – on his first call-up to the national team – having taken in the game from the bench.

After CONCACAF changed the 2022 World Cup Qualification process in a manner that hurts Canada’s chances, John Herdman will need to pick up maximum points from his Nations League tilts. While three points against Cuba is an expectation, the matches against USA – ranked 22nd in the world – are another story.

If the squad can’t pick up enough points to break into the Hex (the top six CONCACAF teams), it will enter a separate qualifying round featuring 29 different CONCACAF nations divided into eight groups, with the group winners then entering a three-tiered knockout phase that will the see winning team get a chance to knock out the fourth-placed team from the Hex. The winner of that match will then play in a playoff World Cup qualification match against a non-CONCACAF member. It’s a convoluted process, and one that Herdman hopes to avoid.


BMO Field will witness a much less comfortable game this October when Canada takes on the USA. It’s a matchup that hasn’t historically favoured Canada, but it’s one Herdman knows he can’t afford to lose. The head coach is expected to organize some friendly matches to help boost Canada’s FIFA ranking, though he hasn’t made a move to do so as of yet.

Fans will need to wait to see what shape Canada’s road to 2022 World Cup qualification looks like, with the rest of the fall season CONCACAF Nations League matches playing a big part in how things will go. Whatever happens, the country got back on the right track with a 6-0 thumping of Cuba, though there’s still a lot left to do.

Fans who missed the replay will be able to watch it on-demand via OneSoccer, which has Canadian streaming rights for the 2019-2020 CONCACAF Nations League in full.