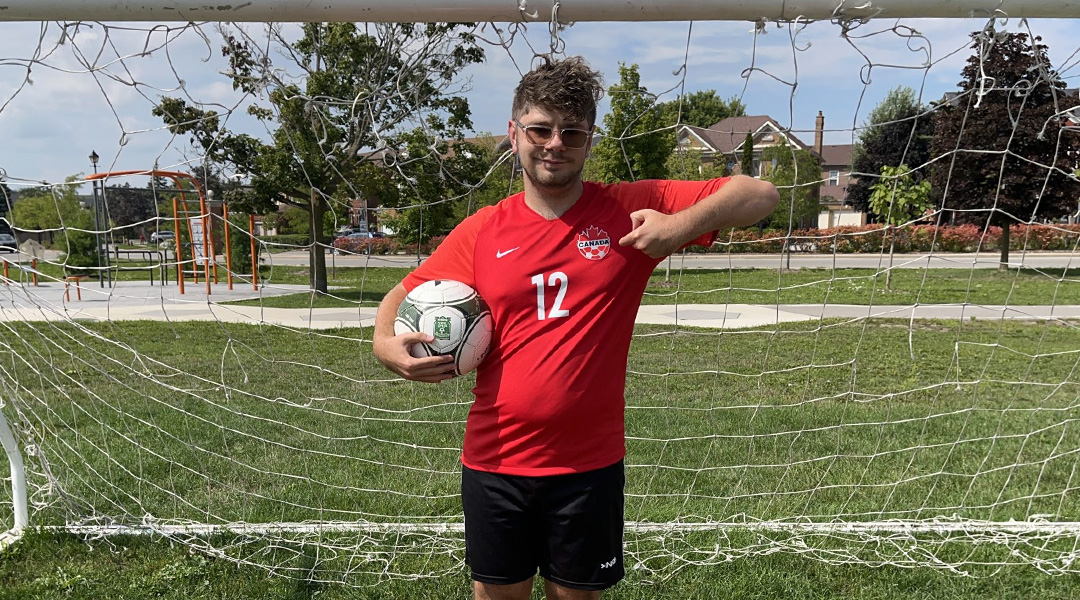 With the ladies claiming gold last year at the Olympics and the men’s program making the World Cup for the first time since 1986, it is an exciting time for football in Canada.

Given the growing popularity of the beautiful game in Canada, it is no surprise others are finding ways to involve themselves. For instance, a new song was created recently to mark this special occasion. The man behind it is Graham Giancola, a 20-year-old fan originally from Georgia.

Northern Tribune spoke with the young artist to learn some more about him, and got a teaser of the track for fans to look at, too!

Born in Batumi, Georgia, Graham moved to Canada just months later. He has been a football fan for about four years, supporting Toronto FC as well as the Canadian and Italian national teams.

The Georgian-Canadian also has quite the experience with musical instruments. He has his grade five piano completed, and is adept with the drums, synthesizer and MIDI. Graham only started creating music videos at the beginning of the pandemic, and plans to make one for his upcoming World Cup song.

Giancola recently completed his degree at Seneca College, intending to return to the college for broadcasting business.

About the World Cup song

After Canada’s success in World Cup qualifying, Graham came up with the idea of creating a song to celebrate the team’s achievement. Along with fellow fan Stavros Greer, they collaborated to come up with a song called We Goin’ to Qatar. It took a couple of days to complete the piece, according to Giancola.

The process of writing the song went well for Graham, as Greer’s help went a long way. “He knew more about Canadian soccer than me” stated Giancola on working with Greer.

Regarding the aim of this song, he wanted the song to be special. He also mentioned several Canadian artists who inspire him, namely Justin Bieber, The Weeknd and Alessia Cara.

Here’s a snippet of what the track sounds like, with the full version set to release closer to Canada’s own trip to Qatar.

When asked about the best part in creating the song, Graham said it was the chance to promote Canadian soccer. It hasn’t always been an easy path for Les Rouges, hence lines like ‘DeRo kept us afloat’ in reference to the ‘Unattached FC’ era preceding Canada’s rise up the rankings.

At the same time, coming up with lyrics proved to be a challenge for the youngster. Furthermore, the “long-standing history of football in this country” could not let him cover everything he wanted to.

The future of Canadian football in Graham’s eyes

To end off the interview, we spoke about the future of football in Canada. Of course, Canada, along with the United States and Mexico, will be co-hosting the World Cup in four years’ time. By that time, Giancola wants to see the Canadian Premier League get closer to Major League Soccer in terms of quality.

At the time of writing, Canada is 43rd in the FIFA World Rankings. In the next quadrennium, Giancola would like to see Canada in the top 20 or 30. John Herdman’s team still has some work to do on that front, but things are on the up.

Graham also mentions his wish to see a larger selection pool for the men’s program. With the Canadian Premier League now in its fourth season, he would like to see more Canadians abroad return home to the domestic league.