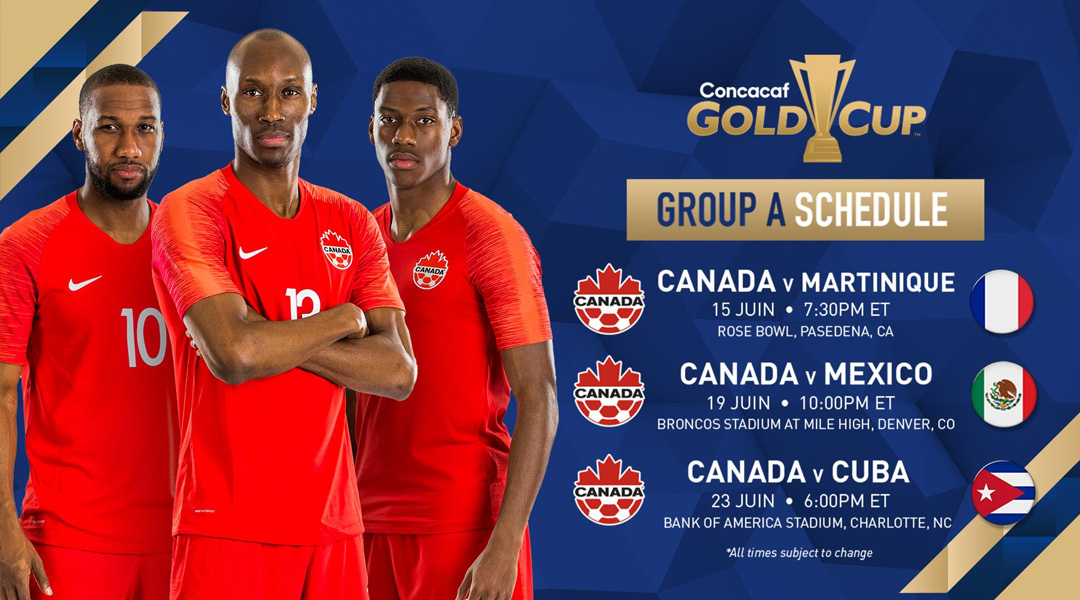 The CONCACAF 2019 Gold Cup drew its groups yesterday, and the result is that Canada has been placed with Mexico, Martinique, and Cuba. It’s a pretty trick group to be in, with Mexico likely to be the dominant force. Martinique, while smaller in stature, have been known to put up a good fight, too.

Currently ranked 78th in the world, John Herdman’s Canada side has been prolific under his tenure, but remain untested against larger opposition. This is all due to change in the coming year, as outside of the Gold Cup Canada has also drawn the United States and Cuba for the CONCACAF Nations League.

We all knew this was going to be a tough draw, no matter what group you ended up in.
As a group, we were hoping to get some tough matches and to get tested and there’s no bigger test than Mexico

Hosted in the USA this time around, the Gold Cup is set to take place this summer. Canada’s campaign will start on June 15th against Martinique at the Rose Bowl. 4 days later, the reds will take to the pitch at Broncos Stadium in Denver against Mexico, and then head to Charlotte to take on Cuba at the Bank of America Stadium.

The top two teams from each group will advance to the quarter-finals. If squad stature is taken at face value, Canada will likely end up fighting for the second spot behind Mexico. They’re certainly a higher rank than Cuba (ranked 174th), though the unranked Martinique can be a tricky side to play against. While it’s not an easy group, Canada should feel confident that its current squad can see the to the knockout stages.

The CONCACAF 2019 Gold Cup will wrap up on July 7th at Soldier’s Field in Chicago, but only time will tell how the Canadians will fair. Canada won the Gold Cup in 2000, and more recently put in a strong knockout stage showing at the 2017 Gold Cup. The 2017 Canadian side bowed out in the quarter-finals following a 2-1 loss to Jamaica, with Junior Hoilett scored a fantastic goal in the match. The Premier League striker will be hoping to add to his tally for the 2019 campaign, where he’ll be one of the key figures alongside Scott Arfield and Alphonso Davies.

This will be the first opportunity for Alphonso Davies to potentially win a trophy on the international scale. The Bayern Munich winge, who can also slot into leftback or a forward position, is Canada’s most exciting prospect. Expect to see plenty of eyes Davies this summer – and many players asked to tightly mark the speedy youngster, too.

This is expected to be the last campaign for 36-year-old Atiba Hutchinson, who’s made 81 appearances for the national side so far. The defensive midfielder has spent the last 6 years at Beşiktaş, and his years of experience playing at such a high level has made him a natural leader within the team. Here’s hoping that Hutchinson goes out on a high note when the time comes.