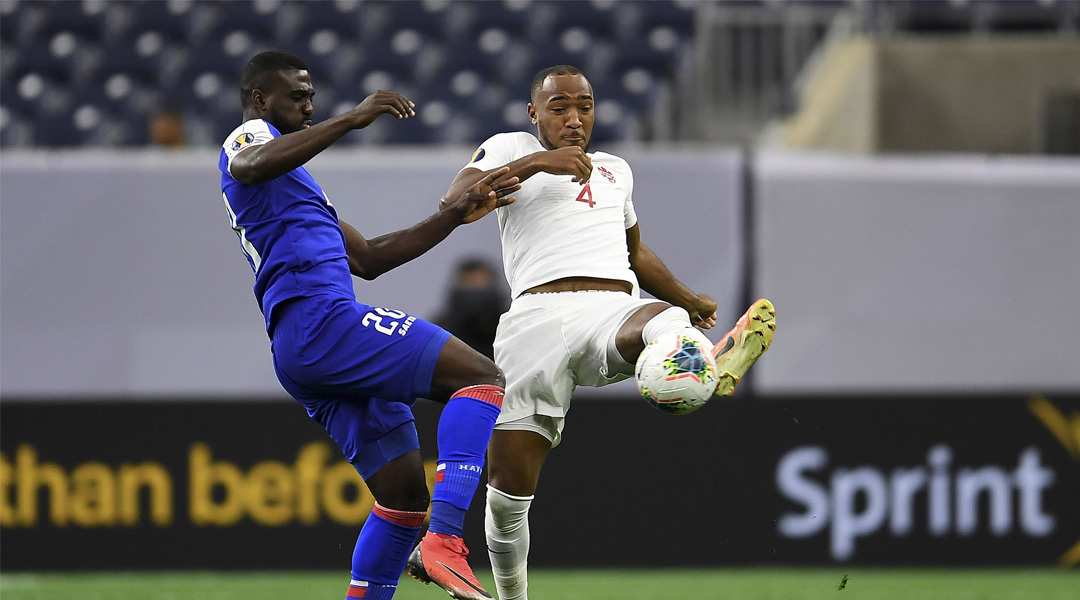 Canada has crashed out of the 2019 Gold Cup after falling to a 3-2 loss against Haiti, who had done well to top their respective group and make it to this stage of the tournament.

A late goal flagged as offside for Atiba Hutchinson will leave a familiar, sour taste in the mouths of Canadian fans as Haiti continues its historic run.

Back in 2015, the Canada team crashed out of the Gold Cup at this exact stage – and Rangers forward Scott Arfield said that crashing out in the first knockout round was an emotional experience he and the squad weren’t keen to experience again. This time around, things had at least started out in Canada’s favour.

A clever freekick from Alphonso Davies found Jonathan David, who blasted the ball into the net in the 18th minute to open the scoring. The duo have been playing together since their days in the Canadian national youth team, and this partnership has paid off in spades. For David, he now has ten goals in just eight appearances for Canada, which puts him as the leader in the cup’s golden boot race.

Davies almost doubled the lead for Canada in the 24th minute, firing a dipping freekick into the crossbar as Haitian goalkeeper Johny Placide was left diving into open space.

Placide would be caught out once more in the 28th minute as Arfield slotted in a through ball to Lucas Cavallini, who rounded the keeper to trot the ball across the line and give Canada a 2-0 lead. Much like David, Cavallini has been in bountiful form for Canada, with that goal becoming his tenth in his last seven caps.

Cavallini has been rumoured to be signing with Liga MX side Atlas, with Canada Soccer mistakenly posting as such on social media. As things stand, the 26-year-old striker remains a Puebla player for now.

Haiti showed why they topped their group when Guerrier fired an acrobatic effort from within the box as the first half entered its final ten minutes, but goalkeeper Milan Borjan – who came off a very successful season with Red Star Belgrade – was ready to be called into action. Minutes later, a freekick from Hervé Bazile came close, but didn’t ultimately call Borjan into action as the game became a bit more back-and-forth.

The second half started Haiti’s way, with a light backpass from Godinho forcing a hasty attempted recovery from Borjan, who ultimately lost the ball to Nazon. The Haitian player coolly slotted the ball into the net to bring Haiti within one goal of a comeback. It was a defensive mixup that will feel familiar to fans who tuned in to the Canada vs French Guiana match during the CONCACAF Nations League qualifiers earlier this year. In the larger picture, it means that Canada’s defense – which hasn’t evolved at the same explosive pace as its offensive talents – still needs plenty of work.

Godinho found himself at the centre of another key defensive mistake as a rash and unnecessary challenge giving Haiti a penalty in the 68th minute. Bazile stepped up to take it, and kept his calm by sending Borjan the wrong way. The ball struck the back of the net: with twenty minutes left to play, things were now all even for both sides.

Things went from bad to worse for Canada in the second half as Haiti completed its comeback rout in the 76th minute, taking the lead with an absolute dagger of a pass that set up Guerrier for a close range goal.

Atiba Hutchinson would get flashbacks of the 2007 Gold Cup as he scored a late equalizer only to see the assistant referee raise the flag for offside. The look of disbelief in his face was palpable, and it’s one that will he echoed by many Canadians who tuned in to the match knowing their team came into the game as heavy favourites.

The result means that Haiti will face either Mexico or Costa Rica in the country’s first-ever Gold Cup semi-final appearance after securing tonight’s 3-2 comeback against Les Rouges. It’s been a historic tournament for Haiti, but Canada head coach John Herdman will be left wondering how his defense managed to crumple so quickly as the second half wore on.

Canada has repeated its 2015 Gold Cup performance against Jamaica by crashing out in the quarter-finals, and will now aim to return to form later this year in the Nations League against Cuba and the USA.