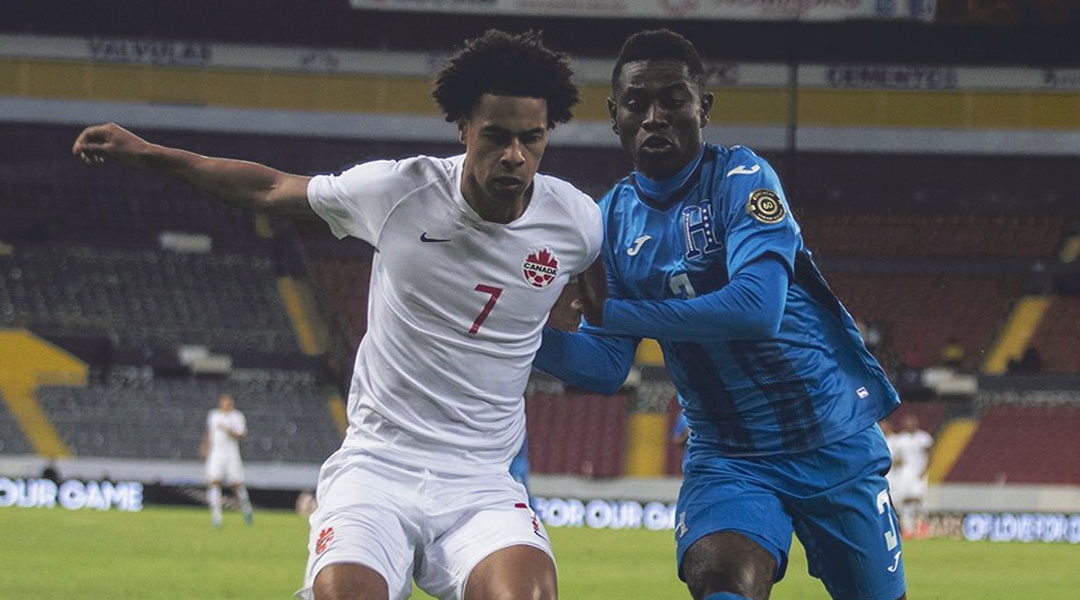 Canada secured its semi-final advancement in the Concacaf Olympic Qualifying tournament tonight with a draw against Honduras in Estadio Jalisco in Guadalajara, Mexico tonight.

The Canada U-23 squad entered the match after having secured a win over El Salvador and a draw against Haiti to leave a top two finish within touching distance. Tonight’s 1-1 draw with Honduras means that Canada finishes second in its group, qualifying for the semi-finals and coming within a single match’s reach of Tokyo Olympics qualification.

However, that match will come against tough opposition: favourited and host country Mexico is now next on the fixture list.

The match was expected to be Canada’s toughest of the group, and so it should perhaps come as no surprise that Honduras claimed the first big chance of the match with an absolute rocket fired by CD Marathon midfielder Kervin Arriaga outside of the box, which beat Pantemis to the right of the net before striking the post.

Canada had a decent opportunity of its own with a corner kick opportunity in the fifteenth minute which met a diving header from Derek Cornelius, who then found himself nearly beaten by Honduran striker Juan Carlos Obregon moments later.

The Canadian Captain would make good on his next big opportunity, with Cornelius scoring his first U-23 goal with a header on the back of a great leading cross from Patrick Metcalfe in the 28th minute, handing the Canada U-23 squad a crucial lead over Honduras:

The jubilations didn’t last long, however, with Honduras immediately responding with a headed equalizer from its own captain just two minutes later, breaking the clean sheet streak of James Pantemis in the process.

The first half grew progressively testy after that, with fouls going both ways. Drama nearly struck just before the end of the first half, with a long range effort from Reyes forcing Pantemis into a stinging two-handed save to keep the scores level ahead of the first half whistle.

The second half saw Cornelius come up big to clear a dangerous cross from Reyes, though the referee’s whistle revealed that any opportunity from Los Catrachos would have been offside all the same.

The Hondurans prodded again moments later, finding space on the right with Reyes setting up Obregon, who fired the opportunity well wide. In the 54th, the duo combined once more with Reyes again firing in a tight cross that flew a bit too high for Obregon to properly control in front of the net.

As the match entered the sixtieth minute, Biello took action to bring forth more attacking inspiration by replacing Theo Bair with Charles-Andreas Brym and Ballou Tabla with Ryan Raposo.

Referee Cesar Ramos brought Kervin Arriaga into the books for a risky tackle in the sixty-seventh, and the player punched the ground in reaction told it all: as it was his second yellow of the tournament, he’ll now miss the semi-final.

Seconds later, Canadian Patrick Metcalfe collected a yellow of his own for tugging on the kit of Edwin Rodriguez. The resulting freekick from a distance struck the wall, with the following corner proving fruitless.

Having put in a tough shift and taken some hits in doing so, Cornelius went down in the 72nd minute and was substituted off, passing the captain’s armband to James Pantemis as he saw himself replaced by Lucas Dias, with Biello clearly hoping for some additional attacking pressure.

Seconds later, disaster nearly struck with Honduras building up its attack in the Canadian box, with Pantemis rushing out but seeing the ball go wild: with the ball in the box and no one in net, Metcalfe was able to clear the danger.

Canada found itself increasingly on the back foot as the game went on, with David Norman Jr. committing a foul a few feet outside of the box to halt a breakneck Honduran counter-attack, with Reyes then firing the resulting freekick over the bar.

New England Revolution forward Tajon Buchanan saw his night end with seven minutes to go, with Cavalry FC’s Mohamed Farsi sprinting on. At the same time, Michael Baldisimo was replaced by Aidan Daniels to round out all five substitutions allowed to Mauro Biello.

Tempers continued to flare in the dying embers of the game, though no more cards were handed out as the two nation’s battled to a 1-1 draw to close out the group, with Honduras at the top of it and Canada right behind them. El Salvador and Haiti did not progress.

With Canada officially finishing in the top two of the group, it now advances to a semi-final match against Mexico set for March 28th, the same day the senior national team plays a World Cup Qualifier against the Cayman Islands. Both matches will be available live on Onesoccer.