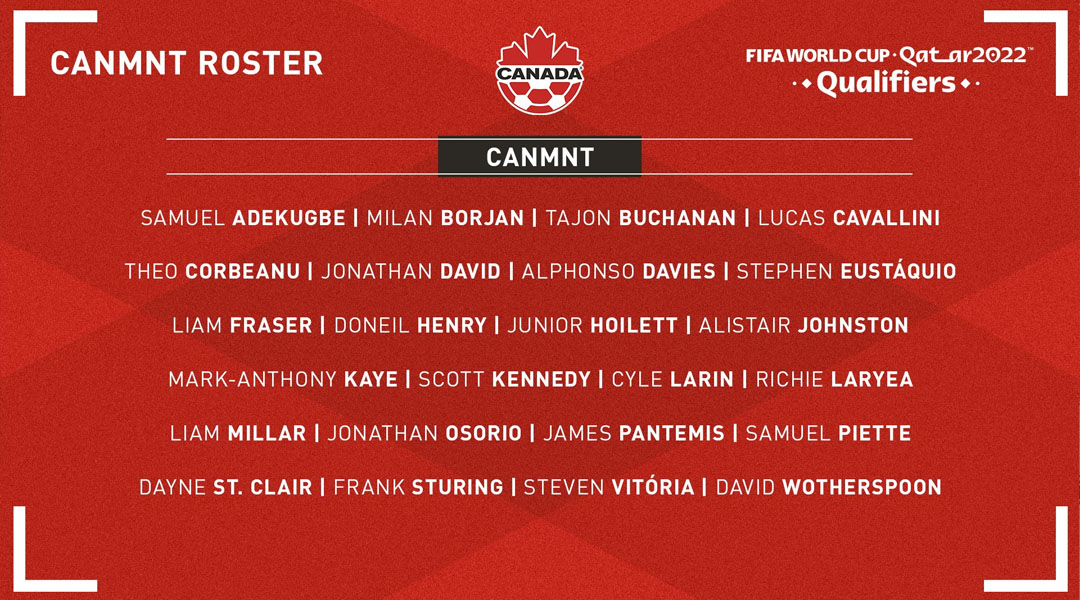 Canada Soccer has announced its roster for its upcoming World Cup Qualifier matches against Aruba and Suriname set to take place on June 5 and 8, respectively. The first match will take place in Florida, with Les Rouges closing out their Group B action in Chicago for the latter.

Much like last time, Canadian national team coach John Herdman has called upon a mixture of veterans and young talent against teams that Les Rouges will be expected to surpass. 2021 has been a fruitful year for many of these selections at club level, with both Alphonso Davies and Jonathan Davies winning their respective leagues, while Milan Borjan, David Wotherspoon, and Cyle Larin all completed domestic doubles in Serbia, Scotland, and Turkey respectively.

Domestic double winners Atiba Hutchinson and Scott Arfield were not included in the next month’s international roster. The former was due to picking up some knocks, with Herdman also reassuring fans that the latter will return to the national team fold in the future.

While Milan Borjan is expected to start in net, MLS goalkeepers Dayne St. Clair and James Pantemis could both make their national team debuts if called upon. The defensive roster sees shuffling with the first-time call-up of Scott Kennedy, with regulars Samuel Adekugbe, Doneil Henry, Richie Laryea, and Steven Vitoria being supplemented by recently capped defenders Alistair Johnston and Frank Sturing. Bayern Munich man Alphonso Davies, of course, can play either at left-back or much further up the left flank.

Canada’s midfield sees MLS talents Samuel Piette, Jonathan Osorio, Mark-Anthony Kaye, and Liam Fraser joined by Stephen Eustaquio, David Junior Hoilett, Theo Corbeanu (who recently made his Premier League debut with Wolves), Liam Millar, and David Wotherspoon. In attack lies Lucas Cavallini, Jonathan David, Cyle Larin, and Tajon Buchanon, who scored twice for the U-23 squad at the Olympic Qualifiers earlier this year but has yet to make an appearance for the senior side.

Canada heads into the final two matches in pole position of the group table, with goal difference proving a crucial differentiator. Should Les Rouges maintain the top position over the course of the next two matches, they will move on to a head-to-head series on June 12 and June 15, with the winner of those matches then advancing to the Concacaf Final Round where eight countries will face eachother this fall.

It’s great to be back together and continue to build on our momentum as every match counts on the road to Qatar 2022. We have an opportunity to build on our solid start, after we put ourselves in a good position with goals difference in the first two matches so that we can control our destiny in the games to come.

Fans will be able to tune into all of Canada’s World Cup Qualifying matches on OneSoccer, with June 5’s match against Aruba scheduled to kick off at 8:00PM EST. The final Group B match takes place against Suriname and will air on June 8 at 9:00PM EST. While the latter is technically a home match, Canada hasn’t been able to play at home with and with fans in the stands since October 2019, when Alphonso Davies and Lucas Cavallini goals saw Canada land a historic Nations League victory over the USA.

We had hoped to play our home match with Canadian fans providing the support and momentum to play a tough nation like Suriname in FIFA World Cup Qualifiers. The reality of the global pandemic and the priority to keep our communities in Canada safe means the match will be played at a neutral site in Chicago, but we will embrace that challenge. Whatever comes at us, we will take it on and do whatever we need to do to advance to the next round.

Herdman’s team has certainly ’embraced the challenge’ so far, comfortably defeating Bermuda in a 5-1 affair to open the Group B action back in March. Knowing goal difference would be key to finishing top of the group, a ruthless record-breaking affair against the Cayman Islands saw Canada march to an 11-0 victory, leaving the side top of the table on goal difference with five over second-placed Suriname.

Canada’s road to the 2022 World Cup has been a complicated affair, with the COVID-19 pandemic seeing a significant delay to the initial round of qualifiers. With vaccination rates rising around the globe, however, there is hope that a return to some normalcy is possible for Canada later on this summer.

Of course, Canada will be involved in more than World Cup action this summer, with the 2021 Gold Cup set to take place this July. Les Rouges find themselves in a group with Martinique, USA, and a third to-be-determined opponent.