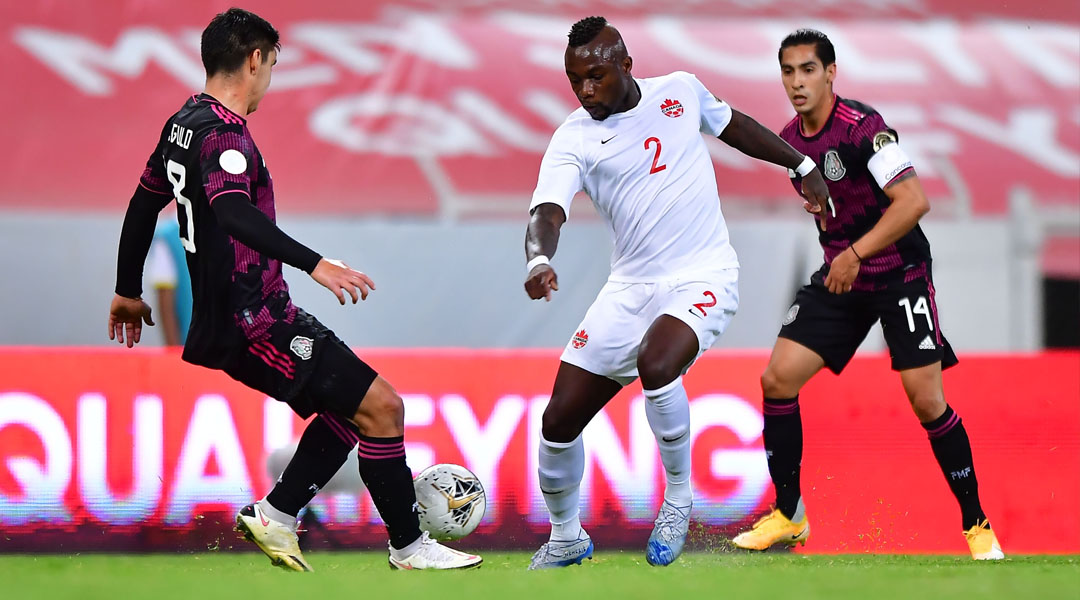 Canada’s Olympic qualification hopes came to a close following an 2-0 loss to Mexico in the semi-finals of the Concacaf Men’s Olympic Qualifying Tournament.

While Les Rouges held on throughout the first half, the host country eventually fought to a 2-0 win after having collected the lion’s share of goalscoring opportunities in Guadalajara.

CF Montreal goalkeeper James Pantemis was handed the armband with Derek Cornelius on the bench after twisting his knee against Honduras, with a five-at-the-back defensive line of Zorhan Bassong, Marcus Godinho, David Norman Jr., Callum Montgomery, and Zachary Brault-Guillard in front of him.

Canada U-23 coach Mauro Biello handed Lucas Dias his first start of at the U-23 level, putting the 18-year-old in midfield along with familiar faces Patrick Metcalfe, Tajon Buchanan, and Michael Baldisimo, with Charles-Andreas Brym in the pole position.

The opening few minutes slanted in Mexico’s favour, with the Concacaf giants probing early and David Norman Jr. recovering well inside the box to prevent a penalty kick from being conceded before the clock had even struck its fifth minute.

Pantemis then did well to make a near-post save four minutes later – his fourteenth save of the tournament – as Mexico continued to apply pressure early on.

The goalkeeper made another big save to keep things equal just ten minutes later after Sebastian Cordova weaved his way through five white shirts to fire a close range shot, with the six-foot-three goalkeeper blocking it out for a corner which resulted in a far-post miss from El Tri.

Canada was able to push forward a few minutes later, but a change of possession saw Pantemis forced to rush out to get a glove onto a fast-paced counter from Acuna, which left the Canadian Captain on the floor. Despite appearing to be hurt, moments later he stifled out yet another opportunity from Mexico, who were knocking at the door with regularity.

In the forty-fifth minute, Zachary Brault-Guillard collected the first yellow of the match for a tactical foul on Cordova, who had beaten him to the ball.

Both sides became embroiled in a dispute following a counter from Buchanan and Dias on the wing, with Tajon Buchanan and Vladimir Lorona both collecting yellows after both teams – including Mexico’s bench – became involved in a pushing match, with the half-time whistle following the scuffle.

All-told, Mexico kept control of the first half well, with Les Rouges seeing a slim number of of counter-attacks mostly snuffed out before a shot on target – though New England Revolution forward Tajon Buchanan did get a sole shot on target for Canada, with the Canadians able to keep their shape absorb the pressure from Mexico in the first 45.

The second half would see David Norman become the third Canadian to join the referee’s handbook, collecting a yellow for bringing down Uriel Antuna as the last man back, with the resulting freekick going straight into the wall.

Mexico would soon capitalize on a mistake from James Pantemis, who received a backpass under pressure and gave away possession from a loose ground pass, with Uriel Antuna scoring his second U-23 goal to put El Tri in the lead moments later:

With changes clearly needing to be made, Biello immediately brought on Theo Bair and Ballou Tabla in place of Charles-Andreas Brym and Lucas Dias.

Things then went from bad to worse for Les Rouges, however, as Mexico bagged its second goal of the game with an off-the-post header from centre-back Johan Vasquez in the 65th:

Rodriguez came close to securing Mexico’s third just half a minute later, with Pantemis palming a cross towards the rushing midfielder, who fired just wide of the post. The CF Montreal shotstopper would make another impressive save a few minutes later as Mexico’s attack kept up consistent pressure.

With the match entering its final ten minutes, Bassong was perhaps lucky to only collect a yellow after bringing down Antuna from behind on the wing.

While Canada looked much more solid for the final minutes of the match, the outcome couldn’t be swayed: Mexico came out 2-0 winners over Canada, who will miss out on the Tokyo Olympics this summer.

Mexico will be taking on Honduras in the tournament final on Tuesday, though both sides have now qualified for the Olympics following today’s results.

With the Canada U-23 squad taking a bow after coming 45 minutes away from the Olympics, the baton will now be based for the senior team who will play against the Cayman Island’s tomorrow in World Cup qualification action following its 5-1 win over Bermuda.