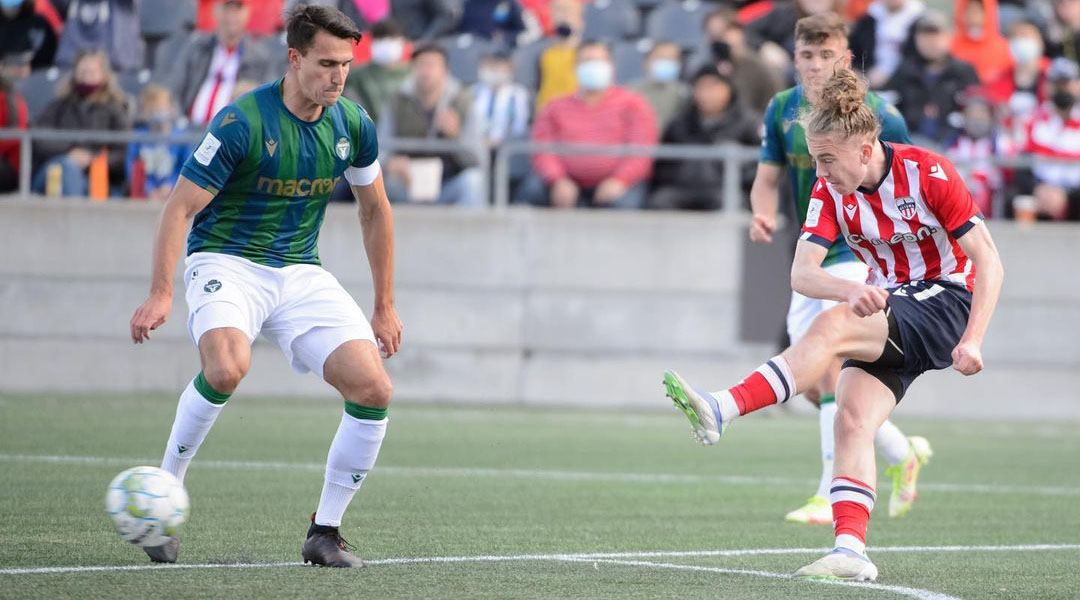 After concluding his third season as a professional, the 17-year-old departed from the nation’s capital last night to begin a multi-week stint in Portugal, where he is set to test himself in new environments ahead of his eighteenth birthday.

“I’m betting on myself,” the midfielder told Northern Tribune from the airport, “I’m off for trials in Portugal and perhaps elsewhere in Europe.”

His third professional season saw the teenage athlete make sixteen appearances for Atletico Ottawa, scoring two goals across 577 minutes of action. With Antoine still yet to complete a full 90 minutes in the CPL, however, some additional playtime abroad could certainly help his development.

Coupland turned professional with the Ottawa Fury at the age of 15, becoming the USL side’s youngest-ever player. After the club ceased operations, he signed with Atletico Ottawa the following spring and made three appearances at last year’s shortened Island Games tournament, making his debut against Valour FC.

Head coach Mista handed the youngster more playtime this season, with his first professional goal coming against Cavalry FC earlier this year. He’d also score in front of friends and family against York United at the tail end of the campaign, with the left-footed youngster continuing to show growth in the middle of the park.

The midfielder expects to remain overseas for the next two weeks, though there’s flexibility in the duration of his stay pending on how the trials go. The clubs in which he is set to trial remain undisclosed.

It also isn’t uncommon for players to sign contracts during the offseason and then return when the CPL kicks off, with last year seeing Anthony Novak and Jose Galan do exactly that, whilst some other CPL athletes underwent offseason loans.

Before turning professional, the Futuro Soccer Academy product had turned down a trial opportunity with Sheffield United to sign closer to home with the Ottawa Fury. Antoine now has 22 professional appearances under his belt, a remarkable number for a player who will just be turning 18 in December.