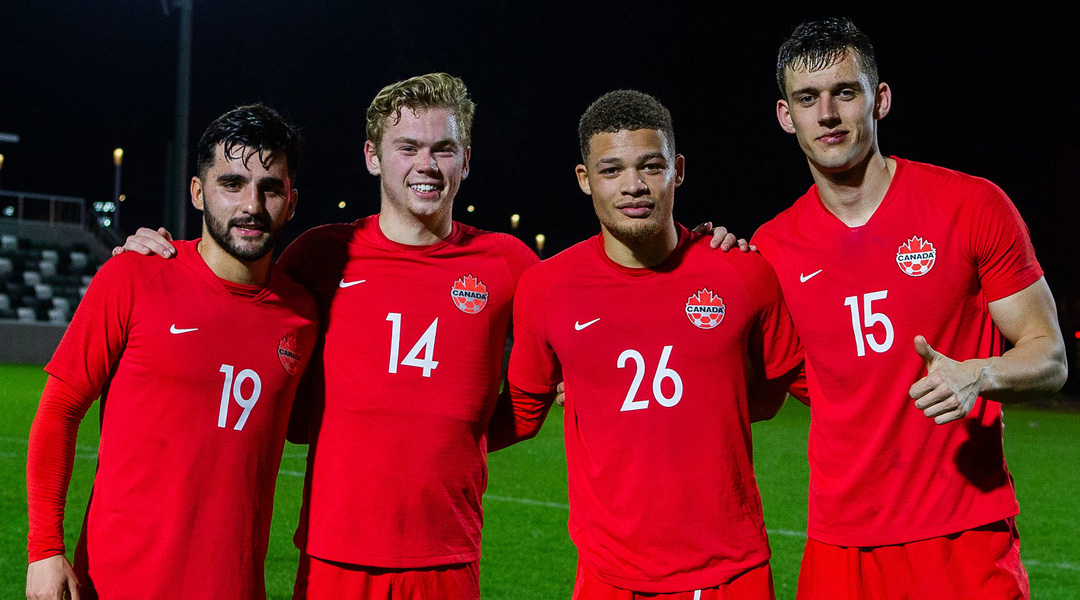 258 days after the first-ever Canadian Premier League match, two of the league’s players have now made their debuts for the senior men’s national team.

FC Edmonton standout Amer Didic got the nod to start ahead of Canada’s second January camp friendly against Barbados, and the six-foot-four centre-back duly impressed: Didic found himself on the ball on several occasions, making some long passes and providing some crucial interceptions. Beyond that, he also got his head to a Liam Fraser corner to score a goal on his debut, too.

Forge FC midfielder and CPL MVP Tristan Borges also got his first taste of senior men’s team action, coming on as a substitute for Jonathan Osorio in the 71st minute. Donning the number 19, Borges didn’t have as much time to make an impression on the pitch. Toronto FC youngster Jacob Shaffelburg and Cercle Brugge’s Zorhan Bassong also made their debuts during the match.

The Canadian national team ended up beating Barbados with a score of 4-1, which is the same result that the country achieved last Tuesday. 21-year-old Charles-Andreas Brym got things off to a quick start for Les Rouges with a goal in the tenth minute, with longtime Whitecaps player Russel Teibert doubling the lead in the 37th. Didic’s goal came in the 63rd, while 17-year-old Toronto FC youngster Jayden Nelson coolly bagged his first international goal a few minutes before the final whistle.

Just like the match prior, Canada was unable to keep a clean sheet against Barbados, with forward Shamar Edwards bagging one back for the Bajan Tridents in the 70th minute.


Speaking with Canadian media personnel after the match, Didic spoke about his thoughts on making his debut for Canada at the age of 25, becoming the first Canadian Premier League player to take to the pitch for the Canadian national team:

It’s always a great honour to be out there and represent your country. It was a good match, just unfortunate to let a goal in there. We were hoping to get a clean sheet this game, and that’s just the way it goes. We’ll look forward to the next game and have that same end in mind. […] Ecstatic to just be on the field there, and I was fortunate to have a great ball there by Liam Fraser, and just got my head on it, put it on target, and it went in. It was great, it was a great game. Thankful for the opportunity. Couldn’t have done it without the whole coaching staff and the players on the field with me there.

While Didic may have cemented his place in Canadian Premier League history, his future within the league remains uncertain: the 25-year-old defender has yet to re-sign with FC Edmonton, meaning where exactly he’ll land in the near future is still an unknown.


The only Canadian Premier League player to participate in the camp without tasting action so far is Cavalry FC goalkeeper Marco Carducci, who made history as the first-ever CPL player to earn a national team call-up. Having had the nod a few times now, he still awaits a chance to impress between the sticks during an international fixture.

With Didic now having been the first to represent the CPL on the international stage, the defender has clocked in his own forever-first. In the context of the typical national team starting lineup, the country’s defense certainly needs more improvement than its attack, so Didic getting the first cap makes a good amount of sense. To that end, head coach John Herdman called Didic’s debut as the stuff of dreams:

These moments, they pull on the shirts, some of these kids first time, these players, and to be able to go on and score on your debut, it’s the stuff dreams are made of.

With two wins in the January camp against Barbados, Canada has etched itself ever so slightly upwards in terms of FIFA points while allowing Herdman to experiment with his lineup and test out youngsters like Toronto FC’s Noble Okello or Jayden Nelson, who are 19 and 17 respectively. Despite the injection of youth, however, players like Amer Didic know that results are still of the upmost importance throughout the camp.

Every game is important, and it’s crucial that we come away with our wins in January here so that we can climb up into the standings there and earn some points, because the ultimate goal is to qualify for the World Cup and so the only way to do that is to get these wins.

Herdman admitted that his squad would be disappointed with having given away the clean sheet, but said there were plenty of positives to take away from the friendly.

The Canadian national team will close out the camp with a match against Iceland on January 15, which will be the toughest test of the camp for the Canadian side. The match will be available to stream on the Canada Soccer website.