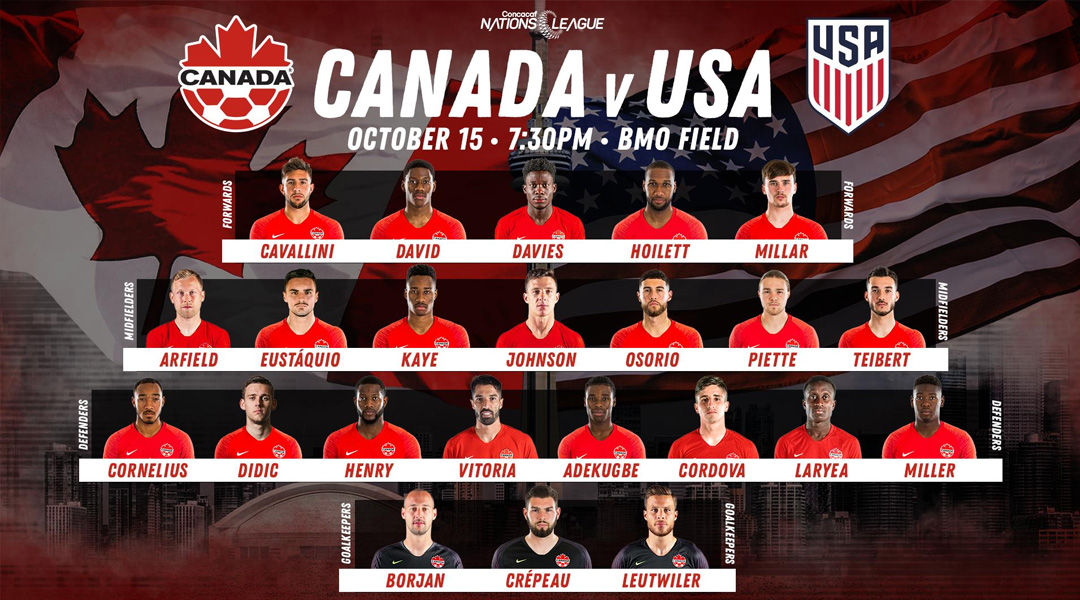 With Canada needing to secure a result against local rivals USA in the CONCACAF Nations League if it wants to stand a somewhat decent chance to break into the Hex for World Cup Qualification, head coach John Herdman has a lot of work to do. Today, Canada’s gaffer has revealed the 23-man roster that will represent Canada in this October’s crucial home match against the USA at BMO Field.

The most noteworthy change is the addition of Scott Arfield, who didn’t suit up for Les Rouges during the matches against Cuba. The Rangers midfielder will be a crucial cog in a Canadian midfield which no longer features the likes of Atiba Hutchinson, while Cruz Azul midfielder Stephen Eustaquio is receiving his first call-up after pledging himself to team Canada – though it remains to be seen if he’ll be fully match-ready from his last injury.

The midfield also includes players coming off of some great highs in their respective MLS seasons: Mark-Anthony Kaye just lifted the Supporters’ Shield with LAFC, while Samuel Piette helped Montreal Impact to the Voyageurs Cup. Regular faces in Jonathan Osorio and Russel Teibert have returned to the lineup as well, alongside 32-year-old national team veteran Will Johnson.


If Canada’s shock loss to Haiti in the Gold Cup proved anything, it was that Canada’s defensive selections have not progressed at the same rate that Canada’s offensive roster has. While the likes of Jonathan David, Alphonso Davies, Junior Hoilett, and Lucas Cavallini ensured that the new generation of Canadian attackers are razor sharp, a defensive line that Herdman infamously called “third tier” hasn’t made similar leaps and bounds.

To help with this, Herdman has now called a player up from the Canadian Premier League for the second time: 24-year-old defender Amer Didic, who plies his trade with FC Edmonton, has received his first call up. It’ll be interesting to see if the six-foot-four centre-back can break into Herdman’s lineup, with FC Edmonton coach Jeff Paulus adamant that he can do well at the national level – though a debut against the USA would be a real trial-by-fire introduction to senior international fixtures:

This is a player, to me he’s the modern centre half. He’s six-foot-four, he does not get beat in aerial challenges. He’s dominant in the air in one-v-one duels. But he can get the ball on the ground and I’ve not seen a player who’s a central defender in the NASL or the CPL that can ping a diagonal ball like Amer Didic .

Canada’s defensive line still has some other comparatively new faces in the likes of Richie Laryea (who made his debut last month) and Juan Cordova, who has only made two appearances for Les Rouges since his debut in 2017. Herdman is evidently willing to toy with some defensive changes ahead of the important bouts against a neighbouring country who, more often than not, has one-upped Canada on the national stage.

Doneil Henry, who was sent off in Canada’s last win against Cuba and will be suspended for the match against the USA, has also made the squad.


After becoming the first CPL player to be called up to the national team, Cavalry FC goalkeeper Marco Carducci hasn’t been tapped this time for the USA bout. Milan Borjan is expected to start between the sticks against the USA, with Maxime Crepeau more than likely to dress for the bench.

The match against the USA will play out at BMO Field on Tuesday, October 15, 2019. John Herdman will be aiming to provide an upset in both the home and away fixtures against his southern neighbours, a task which is easier said that done. It’s also possible that TFC regulars Omar Gonzalez, Michael Bradley, or Jozy Altidore could end up playing against Canada at Toronto FC’s home ground – and that would truly be a sight.