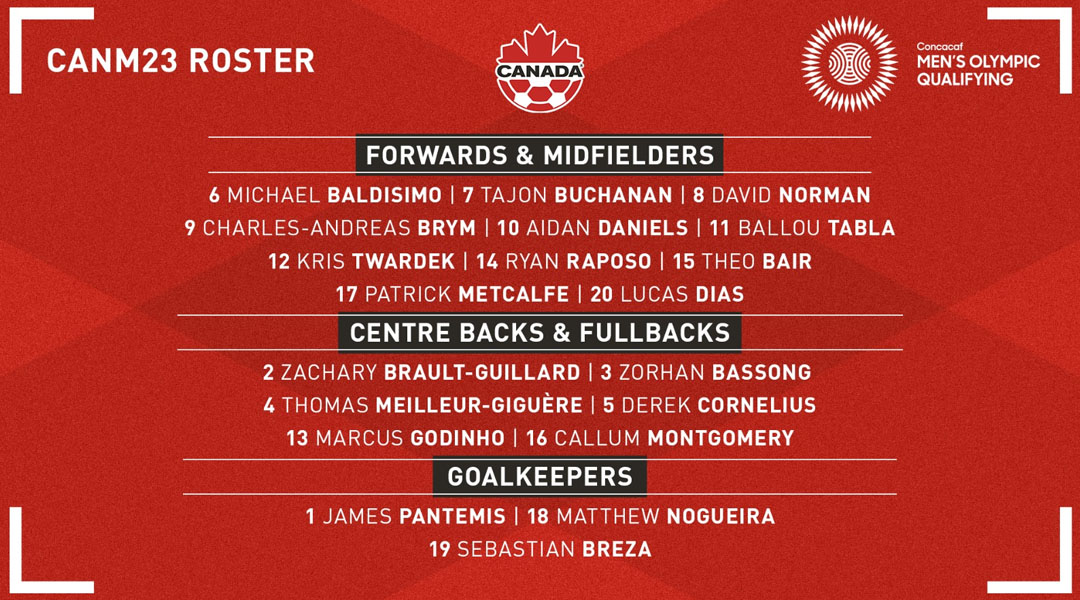 Canada Soccer has announced its twenty-man roster for the Concacaf Olympic Qualifiers set to take place this month.

The only Canadian Premier League players to make the final roster are Pacific FC’s Thomas Meilleur-Giguere and new Cavalry signing David Norman Jr, who missed out on the inaugural Inter Miami CF season through injury before his move to Spruce Meadows.

OBELISQ is also reporting that Mohamed Farsi is one of three emergency substitutes available to be called upon should any of today’s selected squad get injured.

It is presumed that CF Montreal goalkeeper James Pantemis will get the nod as starting goalkeeper, with the six-foot-three shot-stopper arriving to camp on the back of two impressive stints in both the CPL and MLS. Behind him are Europe-based goalkeepers Matthew Nogueira and Sebastian Breza.

In front of the goalkeepers will be centre-backs Thomas Meillure-Giguere, Derek Cornelius, and Callum Montgomery, with defenders Zachary Brault-Guillard, Zorhan Bassong, and Macus Godinho on the flanks.

The Concacaf Men’s Olympic Qualifying Tournament provides Canada with the chance to continue the success of an aligned Men’s National Team Program. This is an opportunity for our young players to help Canada qualify for the Olympic Games and gain experience on their journey to the Men’s National Team.

The provisional roster saw ten Canadian Premier League players make the selection, but only one fifth of that contingent will be moving forward to represent Les Rouges in Mexico. The final squad is ultimately quiet different from the original 2020 provisional roster shown before the COVID-19 pandemic delayed the tournament.

The Concacaf Men’s Olympic Qualifying tournament begins next week on March 18. Les Rouges will begin their campaign against El Salvador on March 19, with mathces against Haiti (March 22) and Honduras (March 25) following quickly.

If Canada finishes in the top two of this group, it will advance to the semi-final stage on March 28, where the two semi-finalist winners will qualify for the Tokyo Olympics set for this summer.