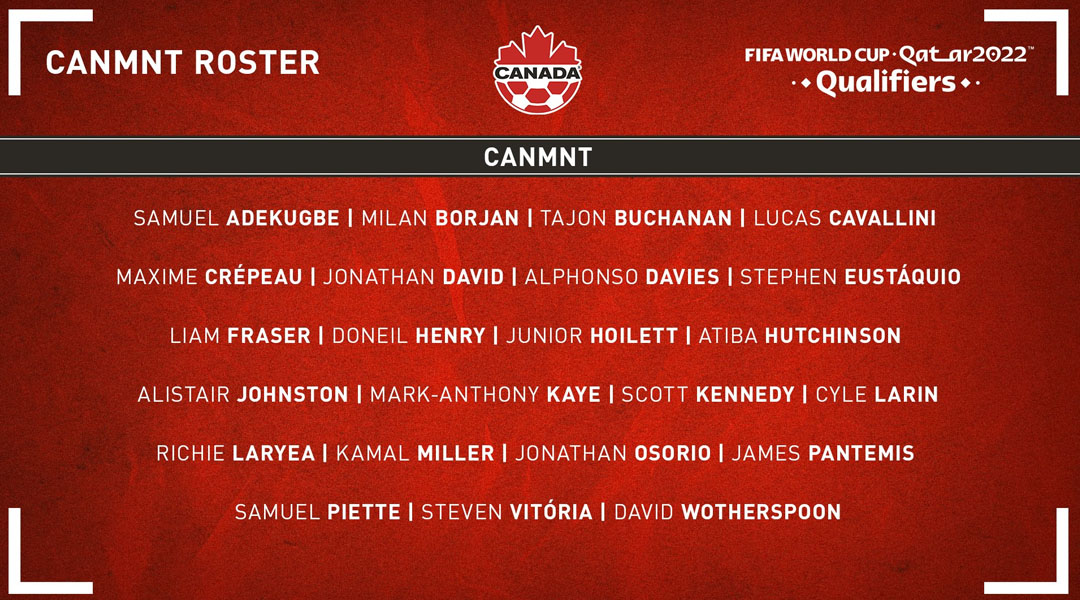 The matches will mark the start of the third and final round of Concacaf World Cup qualifiers, a stage which Canada last reached in 1997. Les Rouges secured entrance to the stage with a comfortable win over Haiti in June.

Veteran national team member Atiba Hutchinson returns to the lineup for Les Rouges, with Bayern Munich’s Alphonso Davies, Lille’s Jonathan David, and new Club Brugge signing Tajon Buchanan all coming in as roster highlights for a men’s national team that has witnessed a surplus of attacking talent in recent times.

With Cavallini currently out of the Whitecaps squad through injury, it’ll be interesting to see if El Tanque cracks back into the lineup. Wolverhampton Wanderers youngster Theo Corbeanu, who has impressed in his first national team appearances this year, was not named to the squad this time around.

The omission of Scott Arfield will likely raise further questions about his future with the national side, though the announced roster certainly looks competitive. Herdman, it seems, is pleased with the options he has for the upcoming matches:

These men know they have a great opportunity to play in front of our fans for the first time in nearly two years, but more importantly the chance to get our campaign off to a great start in the next round of FIFA World Cup Qualifiers. There’s been a lot of competition for places in this selection, so assembling this squad posed some nice problems for a coach.

The upcoming FIFA World Cup Qualification matches will see a long-awaited return home for Les Rouges, with the national team hosting Honduras at BMO Field on September 2 before playing away against the USA in Nashville three days later. The Reds will then return to BMO Field for a match against El Salvador on September 8.

The Canadian national team had last played at home in the fall of 2019, prior to the onset of the COVID-19 pandemic.

The national team has scored a record 42 goals through its eleven matches so far this year, though the countries now grouped with Canada will represent much tougher opposition than Herdman’s side has faced in qualification matches thus far.

The men’s national team will play three more World Cup Qualifiers in October, two in November, and then four next year to determine which three teams will directly qualify for the 2022 World Cup, who will advance to a inter-confederation playoff, and who will see their qualification run stop at this stage.

Canada’s home matches will be available to stream live on OneSoccer, while the away match has been picked up by TSN.