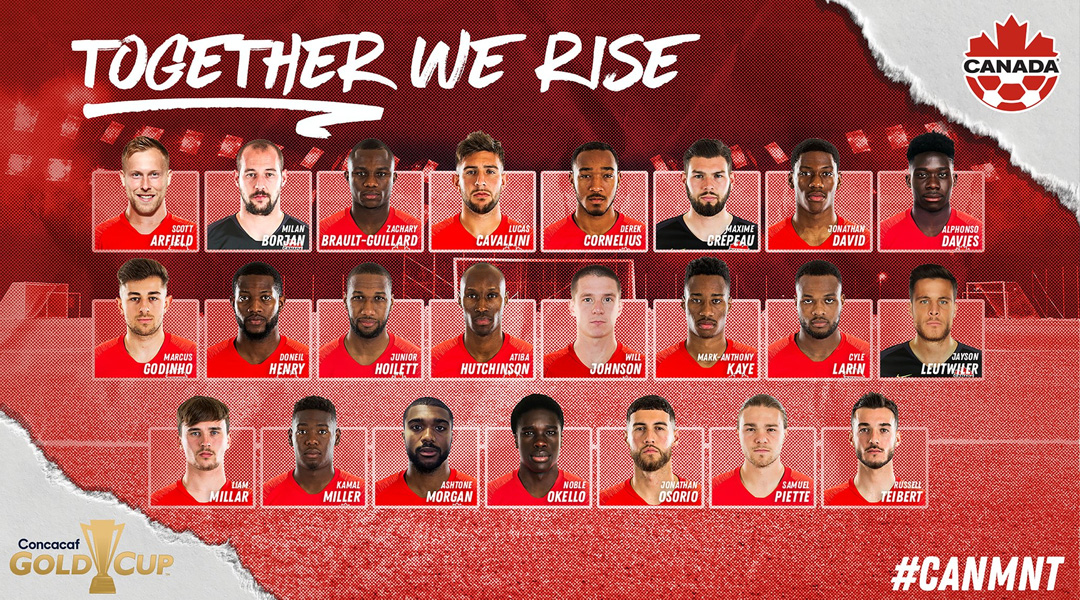 Canada Soccer has officially announced its 23-man roster for the 2019 Gold Cup.

Red Star Belgrade goalkeeper Milan Borjan, 31, will presumably start in net after winning the Serbian SuperLiga for the second year running, whilst also getting in some good UEFA Champions League experience this season. The second and third goalkeeper choices are Maxime Crepeau (Vancouver, 25) and Jeyson Leutwiler (Blackburn Rovers, 31).

The omission of Alessandro Busti (Juventus, 18) might suggest that head coach John Herdman is shying away from throwing youth into the mix, but the rest of his selections don’t lend credence to that theory.

Speaking of, Alphonso Davies (Bayern Munich, 18) will ply his trade up with the forwards, though he’s perfectly capable of operating as a fullback when needed. He’ll be joined by Junior Hoilett (Cardiff City, 28), Liam Miller (Liverpool, 19), Lucas Cavallini (Puebla, 26), Jonathan David (Genk, 19), and Cyle Larin (Besitkas, 24) up front. All-told, this is the most prolific attacking force the Canadian national team has ever seen.

Unlike the last iteration of the Gold Cup, squads will no longer be able to change their squad after the group stage – meaning the 23 Canadians selected today are Herdman’s final selection.

This is expected to be Atiba Hutchinson’s last hurrah with the national team, with the 36-year-old Besitkas forward expected to be a mentor to the youthful squad. Canada has seen an explosion in attacking quality in recent years, with the 2017 Gold Cup already having then-17 Alphonso Davies winning accolades such as Best Young Player and Top Scorer of the tournament. The Bayern Munich man just finished his first-ever Bundesliga season as a champion, and will be hoping to add another medal to his growing collection next month.

Canada will kick off its 2019 Gold Cup run in Pasedena against Martinique, but then faces its hardest opponent – Mexico – some four days later. The Canadian national team will round out the group stage against Cuba on June 23, and will hopefully be moving on to the knockout stages from there.

In 2017, they went undefeated in the Gold Cup group stages for the first time since 2009. A repeat of that isn’t the most likely outcome with Mexico standing in the way, but the Canadian National Team still has a good change to progress past the group stages.

Whatever happens, head coach John Herdman has picked out an exciting roster with lots of quality and a good amount of youth. With both the FIFA Women’s World Cup and the 2019 Gold Cup happening this June – along with Canada qualifying for the U17 World Cup – it’s a great time to be a Canadian fan.