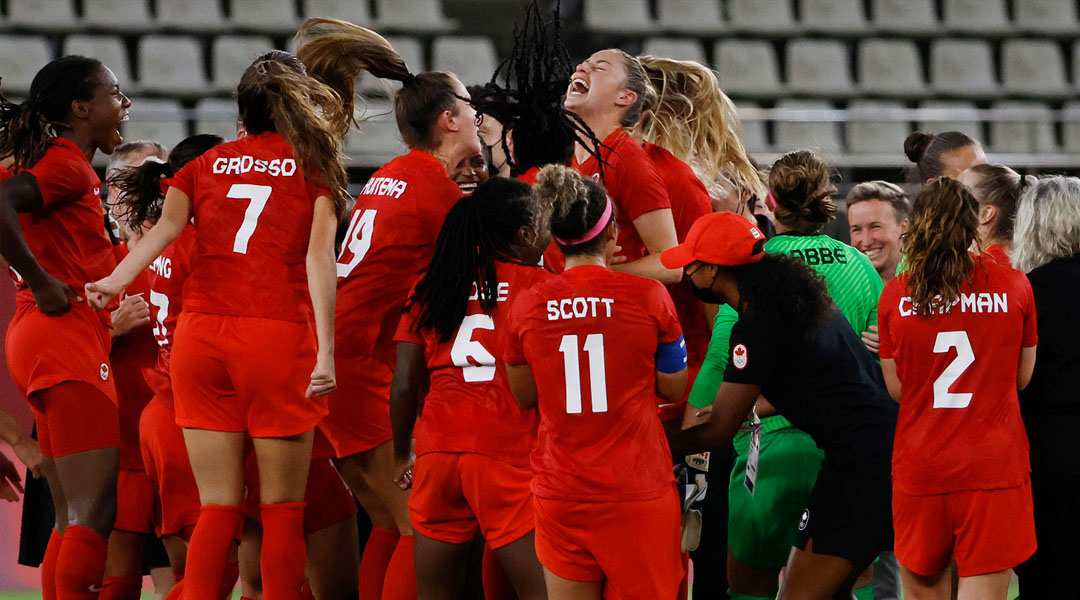 It took sudden death in a penalty shootout, but the Canadian national women’s team has won Gold at the 2020 Tokyo Olympics.

The women’s team had previously won back-to-back bronze medals in 2012 and 2016, now upsetting Number 5-ranked Sweden to top the tournament in Yokohama to take home gold for the first time ever.

Midfielder Jessie Fleming proved integral to Les Rouges in the final, equalizing for the side through a penalty in the 67th minute before opening the scoring for the Canadians in the penalty shootout after things ended 1-1 in extra time.

Canadian goalkeeper Stephanie Labbe came up huge in the penalty shootout, recording two big saves to keep Canada’s gold medal hopes alive as things went to sudden death after five shooters apiece. In the end, it was Vancouver-born Julia Grosso who stepped up to seal the deal for Canada:

Canada had a stroke of fortune to reach that sudden death period, with Swedish Captain Caroline Seger missing her shot in the fifth round of penalty kicks. Canadian legend Christine Sinclair – who has scored the most international goals in football history – watched the shootout from the sidelines after being substituted in the 86th minute.

En route to the final, Canada broke a twenty-year-plus winless streak against the USA, courtesy of another penalty conversion from Fleming. Prior to that, the team dispatched Brazil via penalties in the quarter-final after finishing second in a group stage with Great Britain, Chile, and hosts Japan.

Remarkably, Canada will take home the gold without even having a domestic professional soccer league for women with its own borders – though that’s something that plans are in motion to change, with Ontario’s semi-professional league showing some growth in the meantime.

The Canadians finished with a record of three wins and three draws in the tournament, with head coach Bev Priestman – the only female head coach in the top four countries – making a statement for herself in her first year in charge following the departure of Kenneth Heiner-Moller.