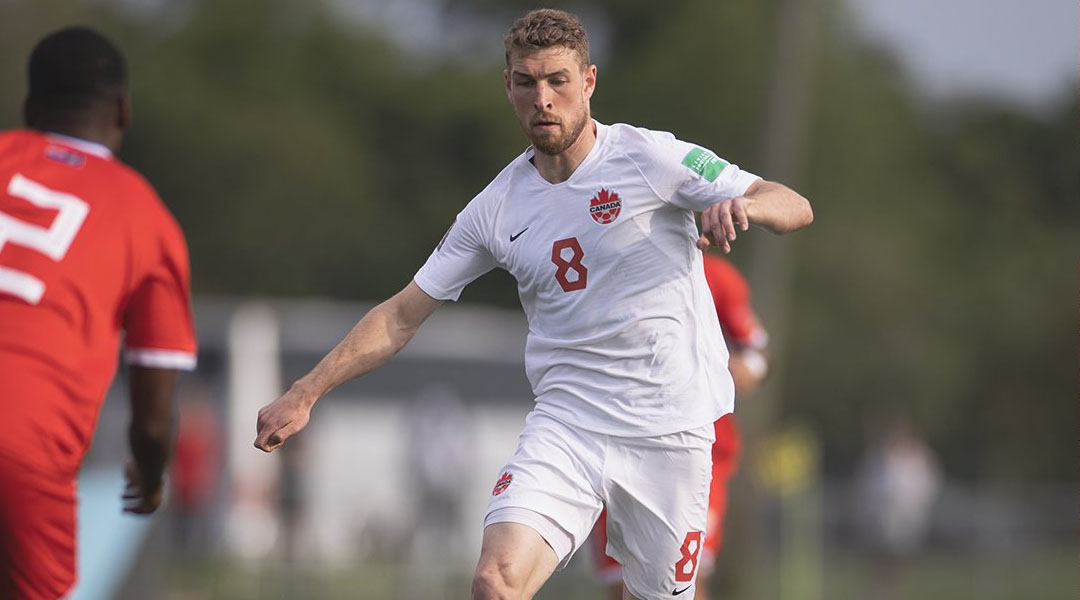 Canada dominated its World Cup qualification match against minnow side Cayman Islands, seeing out a record-breaking 11-0 win in Group B action tonight in Bradenton, Florida.

The match is the biggest victory ever seen by the Canadian men’s national team, with the previous record being an 8-0 win over the US Virgin Islands in 2018. Their biggest win in World Cup qualification was 7-0 against St. Lucia, back when they were under the guidance of Halifax Wanderers head coach Stephen Hart.

The Canadians came into tonight’s match on the back of a 5-1 win over Bermuda that saw Cyle Larin net a hat trick, with both Richie Laryea and Theo Corbeanu scoring their firsts for Canada.

Tonight saw Herdman hand debuts to Frank Sturing and Ricardo Ferreira, with Alistair Johnston and the aforementioned Theo Corbeanu getting their first starts for Les Rouges.

With 38-year-old Atiba Hutchinson having returned to Besiktas, it was CF Montreal stalwart Samuel Piette who captained a Canadian side tipped as heavy favourites over Cayman Islands, who still remain winless in all-time World Cup qualifying action.

It took just five minutes for Canada to open the scoring moments after Cyle Larin first struck the crossbar. The ball pinballed back around a crowded box before going to Frank Sturing, with the Dutch-born defender firing in a half-volley to score his debut goal.

Wolverhampton youngster Theo Corbeanu hit the crossbar a minute later, with Bayern Munich star Alphonso Davies being taken down in the box seconds afterwards – though referee Ted Unkel waved away what appeared to be a legitimate protest.

Larin would get his fourth goal in two matches as the clock struck fourteen, calmly finishing a close range effort after a selfless assist from David Wotherspoon.

The St. Johnstone man was then taken down by a two-footed challenge on the edge of the box after play restarted, though the resulting freekick saw Ricardo Ferreira called out for an offside position.

In the 25th, Wotherspoon would make good on another chance for his first international goal, showing good composure to drive in from the left side of the box before firing a right-footed shot beyond Cayman Islands goalkeeper Albertini Holness to make it 3-0.

Just over a minute later, Davies was taken down in the box yet again after weaving his way through a small platoon of defenders. The 20-year-old stepped up to take the penalty kick, firing home his sixth goal for Canada after sending Holness the wrong way.

The Canadians kept on piling on the misery in quick succession, with Mark-Anthony Kaye scoring from close range following an on-the-line pass from Wotherspoon, though the 26-year-old LAFC midfielder may have thought he missed based on his reaction:

As the first half ticked down to its final minutes, Cayman Islands defensive midfielder D’Andre Rowe collected a yellow card as his team found itself forced to defend on a near-constant basis – though tempers were kept in check despite the lopsided scoreline.

Seconds later, former Vaughan Azzurri man Alistair Johnston scored the sixth for Canada – and his first – with a tidy finish following some flair from Corbeanu and a good setup from Wotherspoon.

By the time Unkle blew the half-time whistle, the Cayman Islands had yet to register a shot on goal, with Les Rouges firmly in control of the match.

The second half got off to a slower start, with Canada failing to take advantage of a handful of chances. In the 60th minute, Herdman replaced his top three with Liam Miller, Cyle Larin, and Theo Corbeanu being replaced by Samuel Adekugbe, Lucas Cavallini, and Junior Hoilett.

Wotherspoon nearly had his second goal moments later, but saw his effort strike the post. Les Rouges would celebrate moments later, however, with Adekugbe finding Mark Anthony-Kaye unmarked in the middle of the box:

Having been on for less than ten minutes, Vancouver Whitecaps striker Lucas Cavallini scored a well-taken header against the Cayman Islands, with the 8-0 scoreline then equaling Canada’s biggest win of all time.

Herdman made his next changes at that point, bringing on Stephen Eustaquio for Samuel Piette and Richie Laryea for Alistair Johnston.

The 72nd minute saw Junior Hoilet brought down in the box by the goalkeeper after he’d broken through a cluster of Cayman Island defenders, with Mark-Anthony Kaye stepping up for the spot kick. He was denied twice by the goalkeeper, but Davies rushed in to knee the ball and make it 9-0, catching the Cayman Islands defense sleeping on the set piece.

Cavallini scored ten and eleven for Canada just moments apart after that, with the striker finding himself on the end of two crosses from Junior Hoilett in quick succession:

By the time the final whistle blew, it was clear that Canada had run rampant over Cayman Islands to maximize its goal difference in World Cup qualifying action, with the national team currently sitting top of its group on goal difference over Suriname.

Canada will close out its Group B action with matches against Aruba and Suriname in the July international break, with the 2021 Gold Cup on the horizon as well.