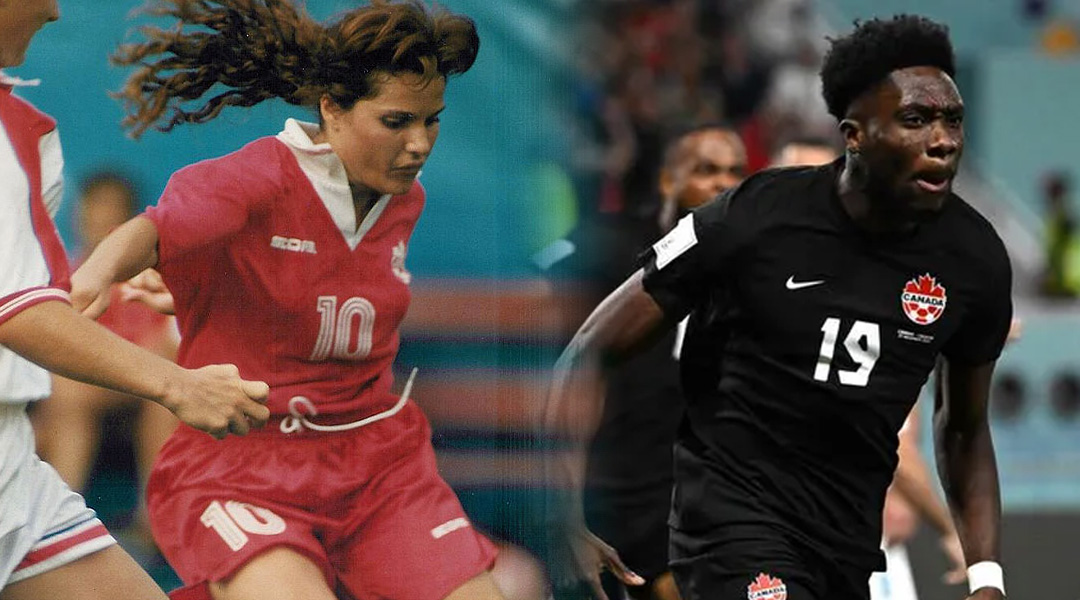 With the Canadian men’s national team making history in Qatar this week, we wanted to reflect upon not only this beautiful moment for the men’s team, but when it took place for the women’s as well.

Canada made its FIFA Women’s World Cup Debut in 1995, which was only the second edition of the competition for the women’s side of the game.

The first of our goals was, we kid you not, an astounding Olimpico from Guelph’s very own Helen Stoumbos:

Stoumbos’ incredible goal came in the 87th minute whilst three down against England, with midfielder Geri Donnelly bagging another one in added time. While a comeback wasn’t on the cards, a crowd of under a thousand in Helsingborg were incredibly lucky to witness history.

The trailblazing goal was Helen’s only one for Les Rouges, with the centre midfielder going on to earn 33 international caps. She’d help Canada to a 1998 Concacaf Women’s Championship, but missed the 1999 World Cup due to knee surgery. She was inducted into the Canadian Soccer Hall of Fame in 2008.

Canada’s first World Cup Cycle in 1986 didn’t see the side put the ball in the back of the net, with Les Rouges enduring a 36 year wait for the next opportunity. It was none other than Bayern Munich star Alphonso Davies who made history on the men’s side last weekend, scoring an incredible header against Croatia, the runners-up of the last World Cup, to give Canada a shock lead.

The thumping header occurred just 67 seconds into what has been Canada’s most-viewed soccer match on television to date, locking Davies even further into the history books. Canada couldn’t hold on to the lead, however, succumbing to a 4-1 loss against Croatia at the final whistle.

With John Herdman’s side now mathematically eliminated from advancing beyond the group stage, the team will hope to put in a good showing against Morocco on Thursday to leave Qatar with their heads held high and, perhaps, help the men’s team secure their first point or three whilst at the World Cup.

Both teams have undergone quite a rise in the comparably recent memory: Helen’s goal took place in front of a few hundred fans, with the matches not reaching Canadian television until a week or so after the team had already returned home. Now the Canadian women’s national team are Olympic champions and World Cup familiars, with squad members who routinely wow a growing number of spectators at the club level. While Canada may not have a pro women’s league to call its own yet, there are growing calls to address that gap in our own backyard.

The men’s team rose from being the 94th ranked side when John Herdman took over in 2018 to 41 by the time the 2022 FIFA Men’s World Cup kicked off, marking a drastic rise in stature for Les Rouges at the men’s level.

Canada has staked a claim in belonging at the World Cup, and the men’s team will be right back in the midst as we host the 2026 edition alongside USA and Mexico. Who will follow in Davies’ steps to score next, of course, remains to be seen.