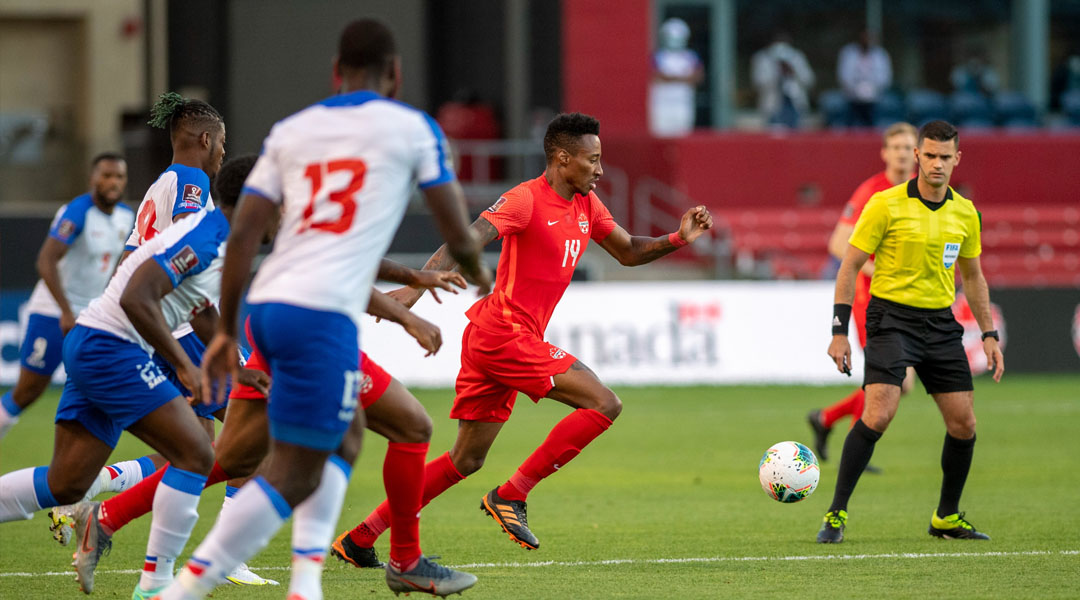 For the first time since 1997, Canada is set to enter the final round of Concacaf World Cup Qualification following a 3-0 victory of Haiti tonight in Chicago.

The national team had snuck their front foot into the group with a 1-0 away win over Haiti in Port-au-Prince three days ago, with tonight’s result now cementing the historic moment: Canada is officially a top three group finish away from its first World Cup appearance since 1986.

It was a result that will leave a bitter taste in the mouth of Haiti fans given that players like goalkeeper Johny Placid were unable to participate in the match due to visa issues, with the Caribbean country’s football organization also criticizing Canada for ‘declaring war’ by reportedly not supplying enough accreditation passes and requiring COVID-19 test results the day prior to the match.

Herdman only made one change from the team who put secured the away win in Haiti: the increasingly familiar 3-5-2 shape was maintained, with Milan Borjan tending to the net behind Scott Kennedy, Steven Vitoria, and Doneil Henry. Wing-backs Alphonso Davies and Alistair Johnston played with a midfield trio of Mark-Anthony Kaye, Stephen Eustaquio, and Jonathan Osorio, with strikers Jonathan David and Cyle Larin up top.

It was David who supplied the first chance for Canada three minutes into the match, with the Lille striker making space on the left side to put a cross into the middle of the box and force Haiti to concede the first corner of the game.

David would then have a penalty shout four minutes later, going down in the box without a call to come from the referee. Moments later, the pocket book would be out to deliver a yellow card to Doneil Henry for a foul committed moments later in the middle of the pitch.

As the game broached the twenty minute mark, Haiti started to probe back following a few speculative Canadian attacks, forcing Borjan into action to show that the Les Grenadiers weren’t to concede the result easily – and given that they had come from behind against Canada to win in the 2019 Gold Cup, Les Rouges had good reason for concern.

Following a second penalty shout in the 32nd minute, another opportunity saw Davies run in close to supply David, who unleashed three quick shots at close range which were all stopped by Haitian goalkeeper Josue Duverger.

As the first half wore down, Canada would see two defenders come close on back-to-back set pieces: Vitoria nearly got on to a deep corner kick in the first, with Henry diving low to head the second corner wide.

Persistent following saw Haitian midfielder Bryan Alceus become the first of his time to pick up a yellow in the must-win match for the visitors. A goal line clearance from the visitors minutes later would deny a strong header from Vitoria to see the first half end nil-nil.

Absolute disaster struck for Haiti right at the dawn of the second half, with Haiti’s goalkeeper Duverger completing a devastating error as he called for a backpass but then miss-touched it twice to send the ball beyond his own line. Suffice to say, it was a horrendous moment that the Montreal-born Haitian will struggle to forget.

Canada’s third penalty shout of the match occurred minutes later with LAFC midfielder Mark-Anthony Kaye being fouled just outside of the box on the right flank, with the resulting freekick proving ineffectual.

Durverger came up big in the 55th, running out to close down a direct run from Jonathan David after the striker had found space between two defenders.

Concern for the Canadian bench came two minutes later when Bryan A
Alceus (already on a yellow) came in hard and late on Doniel Henry, though the six-foot-two centre-back was able to resume the match after being examined by the medical team.

Haiti’s best chance of the match came in the 60th minute with an absolutely stellar flat cross into the middle of the box saw Columbus Crew’s Derrick Etienne Jr. fire wide of the net from close range.

Another late challenge from Haiti would result in a yellow card this time around, with centre-forward Duckens Nazon earning a caution for a reckless change on Kaye.

Herdman’s first change of the night saw David Wotherspoon step onto the pitch to replace Jonathan Osorio in the 65th minute. A sense of deja vu would occur moments later, with Davies delivering a smart cutback cross to David, though a sharp block prevented Les Rouges from doubling the lead.

After firing wide twice in the second half, Besiktas forward Cyle Larin made good on his third good opportunity to nutmeg Durverger and slot in the insurance goal, his fifteenth for Canada:

With the job done, Larin then found himself replaced by Sam Adekugbe. Shortly after that, a double substitute saw superstar duo Jonathan David and Alphonso Davies replaced by Tajon Buchanan and Junior Hoilett.

The veteran winger would make his presence felt immediately, striking the far post in the 88th minute, collecting his own rebound to score the third and final goal for Canada:

The blow of the final whistle confirmed the 4-0 aggregate result for Canada, who now march on to the third and final Concacaf World Cup qualification group – dubbed The Octagon – where Les Rouges will face the likes of USA, Mexico, Jamaica, Costa Rica, Panama, Honduras, and El Salvador.

The Canadian national team began its COVID-19-restructured qualification campaign in March, having surpassed the likes of Suriname, Bermuda, Aruba, Cayman Island, and now Haiti without ever having gone behind in a match.

Meanwhile, Haiti fans will be left wondering if things could have been different had athletes like Johny Placid not had difficulties entering the country for the fixture – but redemption will need to come another day for both Haiti and goalkeeper Josue Duverger.

The third round for Canada will begin in September 2021, with hopes high that the country’s home games will be able to take place within the country with fans in the stands at that point. Canada will begin the group playing home against Honduras before playing away against the USA.

Prior to that, Canada will take part in the 2021 Gold Cup this July, with the matches available on OneSoccer.