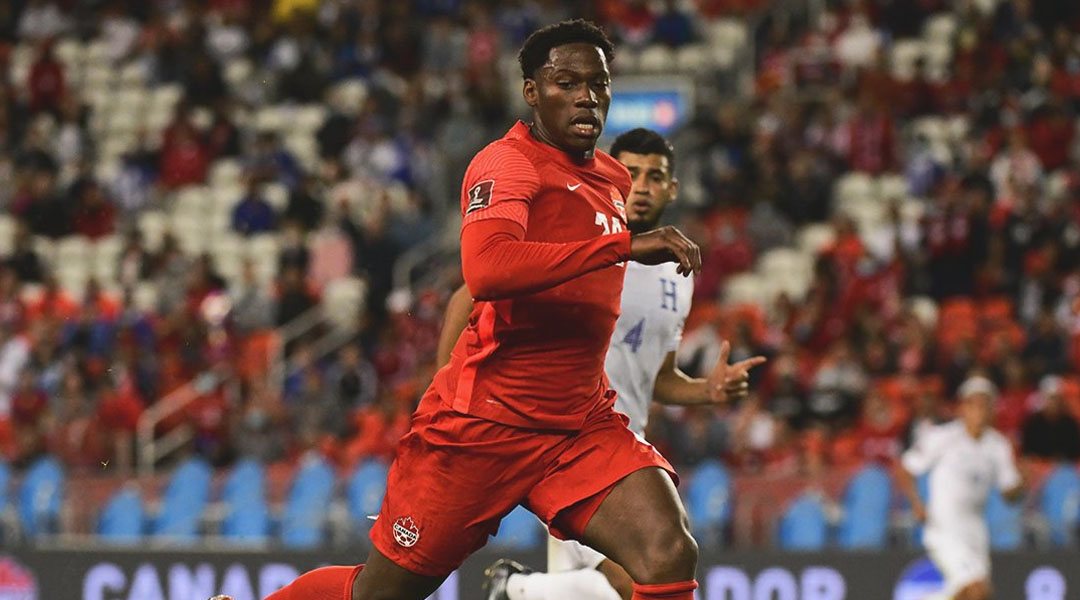 Canada’s start to the final round of World Cup Qualifiers is off to a tempered start following a tough 1-1 draw against Honduras.

The national team‘s long-awaited return home finished with all things equal between the two sides after a first-half penalty from Alexander Lopez was cancelled out by a second-half spot kick from Cyle Larin.

Starting XI ? for the opening match of ‘The Octagon’ #CANMNT #WCQ #ForCanada pic.twitter.com/PqWUcHwjge

The opening minutes saw Bayern Munich man Alphonso Davies probing early, but there were certainly danger signs in place as Alistair Johnston was forced into two big clearances with Borjan being called into action, too.

The first-half saw both sides probing from the middle of the park in fairly even contest, with Davies and Buchanan swapping wings throughout as Canada tried to find a good rhythm.

The 39th minute saw Tajon Buchanan called for a foul against DC United’s Andy Najar, who went down under body contact from the new Club Brugge signing. The referee pointed to the spot, with Alexander Lopez firing a sharp penalty straight into the left corner to give Los Catrachos a first half lead.

Lopez appears to have aggravated his hamstring during the spot kick, with the 29-year-old being stretchered off and replaced by CF Montreal phenom Romell Quioto right afterwards.

Canada’s best opportunity would come in the final minute of the first half, with Richie Laryea feeding a sharp pass to Jonathan David, who fired a strong shot that rebounded high off of the gloves of Luis Lopez. A half-chance header from Cyle Larin followed the opportunity, but it went right at the Honduran goalkeeper.

Canada brought a lot of heat to open up the second half, with bombing runs from Alphonso Davies and a surplus of half-chances from the left flank putting Honduras under pressure.

The first real chance for the Hondurans in the second half came in the 56th minute, with Quiotto firing high under pressure – though the effort came as a firm reminder that Canada was playing a dangerous counter-attacking side.

The home crowd’s chanting was hitting a fever pitch as Atiba Hutchinson tried a long distance effort that deflected out for a corner, with the resulting set piece seeing plenty of players scramble around the box after Lopez failed to keep hold of the ball. Vitoria walked out of it with a yellow card.

A daring run from Richie Laryea saw the ball played out wide to Davies in the 64th minute, with a low cross finding Junior Hoilett in the box. The veteran found himself fouled, with Canada earning a chance to equalize from the resulting penalty.

Besiktas striker Cyle Larin stepped up for it, and he made good on the opportunity for his nineteenth international goal:

Larin had a golden opportunity to put Les Rouges in front just minutes later, heading a stellar long cross from Stephen Eustaquio just wide of the net from close range.

Honduras saw a stellar chance of its own pass by just minutes later, with Brayan Moya nearly putting the visitors in front after his effort hit the woodwork following a fingertip save from Milan Borjan.

Despite some promising late set pieces from Canada and a close range chance for Laryea, the match would finish tied 1-1 between the two sides at BMO Field in a result that, one feels, neither side will be completely happy with.

Canada has thirteen more matches to play in the eight-team final round, with the country’s journey to Qatar qualification now in its final stage – the first time Canada had reached such since 1986.

The current international break will see Canada play an away match against the United States this weekend before returning to BMO Field to take on El Salvador on September 8.

New distribution deals are now in place that allow for domestic national team fans to take in the World Cup Qualification matches through OneSoccer, Sportsnet, and fuboTV.