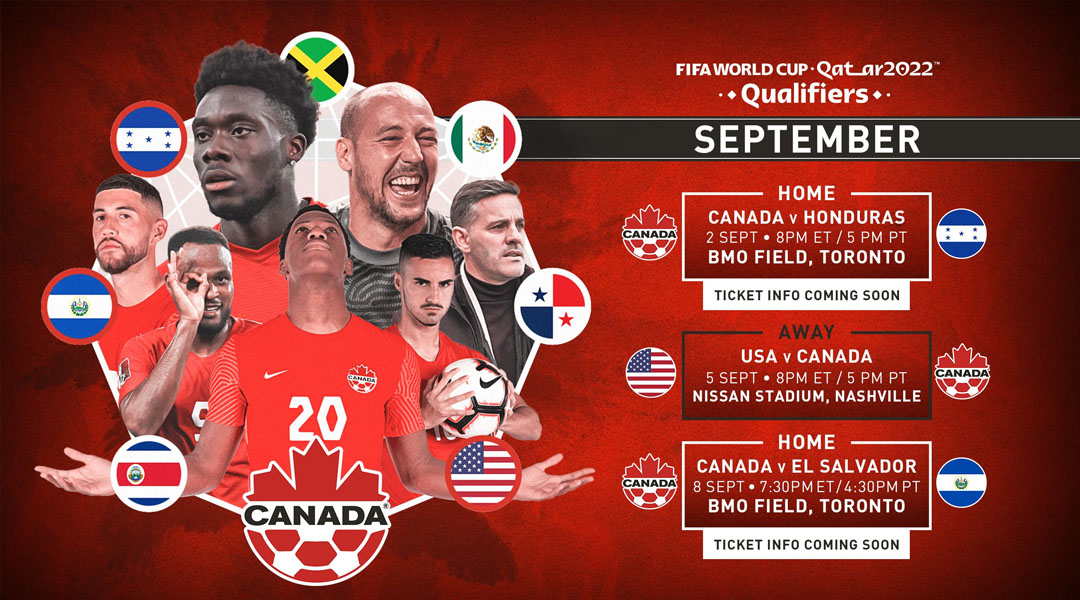 For the first time since the onset of the COVID-19 pandemic, the Canadian men’s national team will be hosting two international matches on home soil.

Canada Soccer has just announced that two of three FIFA World Cup Qualifiers will take place at BMO Field in Toronto next month, with an away game against the USA tucked in the middle.

It’s the beginning of a long run of play in the Concacaf Final Round of World Cup qualification, which begins next month but will only conclude in March 2022 after 14 games played.

We really want to sing that anthem at home in Canada with our fans, there’s no better sound in sport. We’ve shown in recent times that we are ready to have a real push for the FIFA World Cup Qatar 2022. With the fans behind us at home, it will bring us to another level.

Canada Soccer states that the home matches will be subject to authorization from the Government of Canada, with fans permitted pending health approval from both provincial and municipal heal authorities.

It also states that ticket information for the home matches will come soon, so fans won’t have to wait too much longer to secure themselves seats at BMO Field.

The last qualification process in June was really important for this group of men to build a resilience and camaraderie in games where you knew if you slipped up, our FIFA World Cup dream would have been up in smoke. That sort of pressure, the expectation, scrutiny and consequences has just hardened the group. With those moments, confidence has grown and in the Concacaf Gold Cup it continued to build.

In terms of the World Cup Qualifiers, there are five more matches for the men’s national team this year after the three in September: three in October, and two in November, with dates and locations still to be determined.

With Tajon Buchanon winning the Concacaf Gold Cup Young Player Award and forwards like Cyle Larin, Jonathan David, and Alphonso Davies likely able to join in on the action next month, it’ll be an exciting time for Canadian football.

The men’s national team will then play six more matches in and before March 2022, and will hope to secure a qualifying spot in a tough group of elite Concacaf nations Costa Rica, El Salvador, Honduras, Jamaica, Mexico, Panama, and the USA.