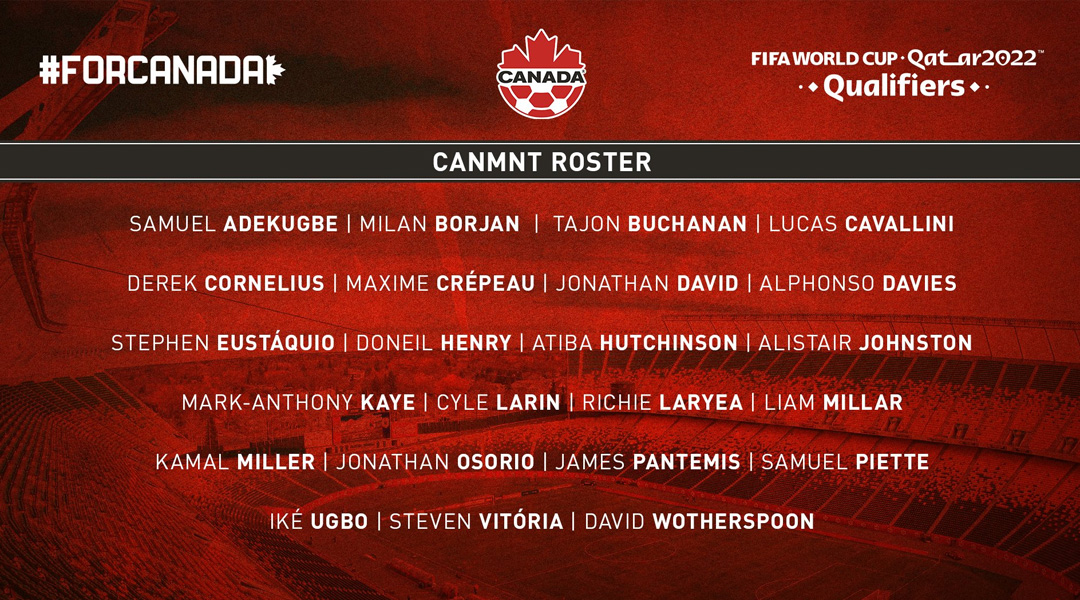 Canada Soccer has announced the Canadian Men’s National Team roster for its upcoming World Cup Qualifiers in Edmonton, with KRC Genk forward Ike Ugbo now being included after he declared for the team yesterday.

The squad will be hosting both Costa Rica and Mexico at Edmonton’s Commonwealth Stadium on November 12 and November 16, respectively.

Herdman’s selections beyond Ugbo are full of national team familiars highlighted by the likes of Jonathan David, Cyle Larin, and Atiba Hutchinson, while Canadian superstar Alphonso Davies will finally get a chance to play international football in his hometown.

Goalkeeper Milan Borjan is expected to resume his post between the sticks with Mexime Crepeau and James Pantemis as backups, while a defensive line of Derek Cornelius, Doneil Henry, Kamal Millar, Steven Vitoria, Samuel Adekugbe, Alistair Johnston, and Richie Laryea have all gotten the expected nod from Herdman.

Both Junior Hoilett and Scott Kennedy are out of this month’s lineup due to injury, while Scott Arfield’s time with the team seems to have truly come to a quiet close. Despite some good form for TFC, Jacob Shaffelburg will also sit this one out.

Canada’s attack is proving potent at a pivotal point in its World Cup Qualifying campaign, with the country now rising to 48th in the FIFA World Rankings – the highest it has been since 1996. Still, there’s a long way to go in terms of qualifying for the 2022 World Cup.

These home matches present different challenges for which we will need to be ready, but as usual it is one match at a time and with a full house at Commonwealth Stadium we will be pushing for maximum points.

Canada currently finds itself in third place after six matches, and if a strong Les Rouges squad can hold onto this position they’ll qualify for the 2022 World Cup in Qatar. With both away legs to Mexico and the USA already behind them, Canada now needs to maintain its composure for the remaining eight matches from group action.

The minimum goal at the end of every window is to finish in the top-three, but these games give us the chance to create separation between us and Costa Rica and the potential of closing the gap on the group leaders Mexico. There’s so much to play for, but with our home crowds behind us anything is possible.

It wasn’t too long ago when Les Rouges squared up against Costa Rica, with goals from Junior Hoilett and Stephen Eustaquio seeing Canada dispatch the side in the 2021 Gold Cup quarter-final stage.

It was only one month ago when Canada travelled to the Estadio Azteca and secured a draw against Mexico. The sides have actually met at Commonwealth before, recording two seperate 2-2 draws there in 2008 and 1997. 2021’s edition will have a big impact on Canada’s chances of maintaining a top three position.

We play for Canada, and it is the fans for whom we are doing this, for those who are as passionate about this sport and country as us. We want to take this country and our fans to a FIFA World Cup, that is our mission.

The national team matches will be available on OneSoccer, fuboTV, Sportsnet, RDS, and Telus Channel 980. The matches against Costa Rica and Mexico will kick off at 9:00 PM EST on November 12 and November 16, respectively.