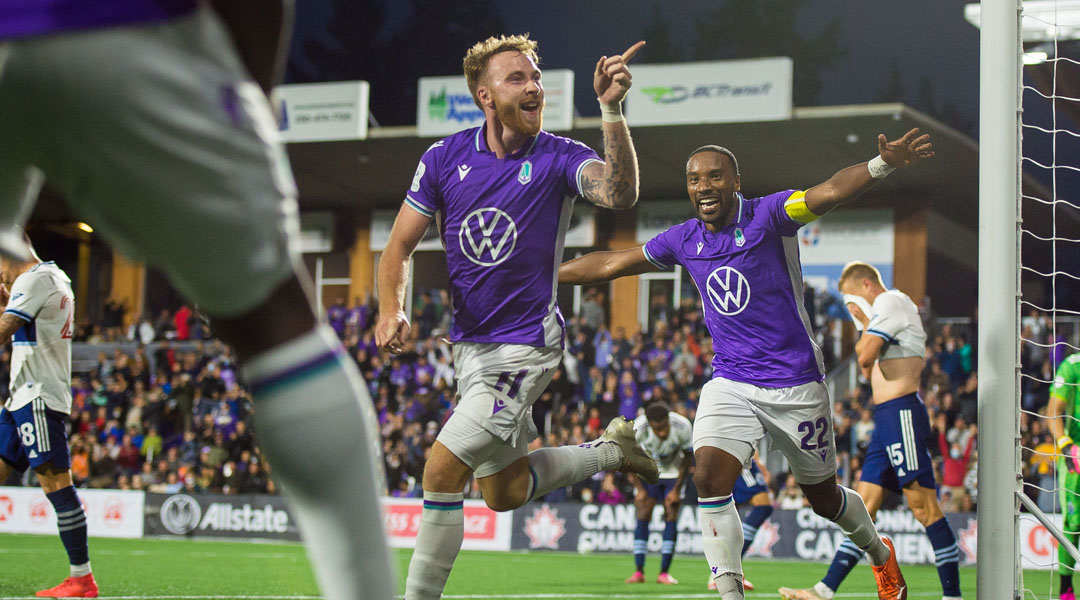 Tomorrow evening will see ninety minutes of action at BMO Field decide whether Toronto FC or Pacific FC will march on to the Canadian Championship Final, with the visitors from the west coast raring to go.

The away team has already knocked out Major League Soccer competition en route to the semi-final, with the top-of-the-table CPL side running out 4-3 victors over the Vancouver Whitecaps in the preliminary round before dispatching Cavalry FC in the quarter-finals.

With Forge having looked the better team against CF Montreal in the other semi-final before bowing out on penalties, there’ll be a lot of curious eyes on tomorrow’s MLS-vs-CPL cup tilt.

Externally, it’s the biggest game in our club history. For me, football is on the pitch, no matter what people say. It doesn’t matter to me what you have or who you’re facing, eventually it’s one game and ninety minutes that you’ve got to play. In cup games, anything can happen. I don’t look at it any differently than a league game.

A former MLS player himself, Kah is no stranger to these kind of nights. The 41-year-old is in the midst of his second season at Pacific, having helped establish a fast-paced, fluid attack in a Pacific FC side that has scored a league-leading 47 goals after 27 games.

His first season at Pacific saw the side secure a postseason berth for the first time ever, and he’s followed that up with a playoff position this year, too. Under his guidance, the club has embraced a big sense of togetherness amongst a no-quit squad that sports several players who have been part of the MLS Academy system at one point or another.

For Kah, tomorrow is the perfect opportunity for a hungry side to measure itself against a higher level of play, with Toronto FC entering as expected favourites after comfortably dispatching York United 5-0 from the competition on a rainy September evening and, more recently, having regained some of its footing in MLS play too.

The MLS side is a routine favourite for the domestic cup, hoisting the trophy seven times while still booked for a tentative final in the confusingly belated 2020 edition.

For me, it’s the perfect game for players to measure themselves. When it comes to trophies, you’re playing against the best team in Canada that has a history of winning silverware and also has some of the best players in the league. If you want to be playing at a Major League level, these are the games in which you measure yourself.

With Toronto FC expected to put out a full strength lineup, there’s a lot of tantalizing matchups set to take place throughout the pitch. Kah is looking forward to seeing how defender Lukas MacNaughton can defend against someone like Jozy Altidore, a proven attacker in the league who is in the midst of a resurgence from the sidelines, or how fast-footed midfielder Marco Bustos will perform against the likes of Richie Laryea.

The aforementioned Lukas MacNaughton has featured in all but two of Pacific FC’s matches so far this season, with the 26-year-old centre-back establishing himself as one of the most consistent defenders at the CPL level. Kah says players like him deserve a chance to test themselves against a higher level, because that’s where Pa sees them eventually going.

For me when I look at him and having played in MLS myself, I see him as an MLS defender. I think the greatest reward for him as well as us as a club is for him to move to a higher level where he can test himself, because he truly deserves it and he is ready for that level. I think for myself, I would love to see somebody like him get into MLS.

Right-back Kadin Chung is another Pacific original now in his third year with the side, and he’s one Kah believes has been at the national team doorstep for some time now. Given the chance to enter such an environment, believes Kah, the player will make a case to justify his presence. Having stepped up in a big manner against the Whitecaps earlier this season, he’ll be another one to watch if Pacific are to surprise Toronto FC.

People like him, Marco Bustos, and Lukas MacNaughton who has had a terrific season for us, it’s important because they do possess the means to play higher up. If things come, you have to make sure that you have people that are ready to step in.

Pacific has certainly seen players step up from all spots of the pitch throughout its season so far, with forwards Terran Campbell and Alejandro Diaz both scoring ten goals apiece in league play, coming up big while club talisman Marco Bustos was sidelined. The star player announced his return with a brace against the Eddies last week, but the club certainly proved that it isn’t a one-man show in his absence.

Kah also brought in sharp offseason additions like Manny Aparicio (a former TFC product himself) and Matteo Polisi, who have also done well when called upon. In all, Kah has well-utilized the full depth of his squad throughout the campaign, barring any season-long injuries. It’s all part of the process.

For us, we have a mentality of next man up. It’s very important, because it’s never individual players that will win you the league: it’s the depth of your squad. When you talk about the squad, everyone is involved. I needed to make everyone understand that sooner or later, everyone plays a huge part in our season.

Kah will need everything in his arsenal if Pacific are to become the first CPL team to reach the Canadian Championship final, a competition he says was mainly granted for MLS sides to decide who gets a Champions League berth. The CPL introduced itself to the cup with a flourish in 2019, with the Whitecaps falling to Cavalry and York United putting serious pressure on eventual winners Montreal.

The CPL is proving combative against MLS competition in 2021, too, which Kah says is a massive step for domestic football. Given that someone like Alejandro Pozuelo makes more than five-and-a-half times the maximum salary cap of Pacific’s squad, these kind of David-vs-Goliath matchups can prove to be something special.

Just like how MLS has enjoyed a significant period of growth over the last eight years of so, Kah expects the CPL to keep working on its own momentum. Success in the cup will help boost the profile of Canada’s domestic league, and that will attract better players, more fans, and a new generation of talent hoping to break into the professional game.

For the CPL to be the competitive against MLS clubs, it’s massive – even though there’s a disparity in salary and all these stuff, we can still be competitive. You can see the growth, and we can continue to grow. We need to be a recognizable league in Concacaf, and then people see it and believe they can come here to grow.

The measuring stick will be out tomorrow night, with top-of-the-table Pacific FC set to face a Toronto FC side that, one senses, really needs to pick up a Voyageurs Cup to avoid calling the season a total wash. With head coach Javier Perez expected to give the cup clash his all, Pacific will need to stand tall against the favourites. It’ll be a long ninety minutes.

Toronto FC will host Pacific FC tomorrow at 7:30PM EST for the semi-final, with the match available on both OneSoccer and Telus Channel 980. The winner will advance to face CF Montreal for cup honours and a berth in the 2022 Champions League.