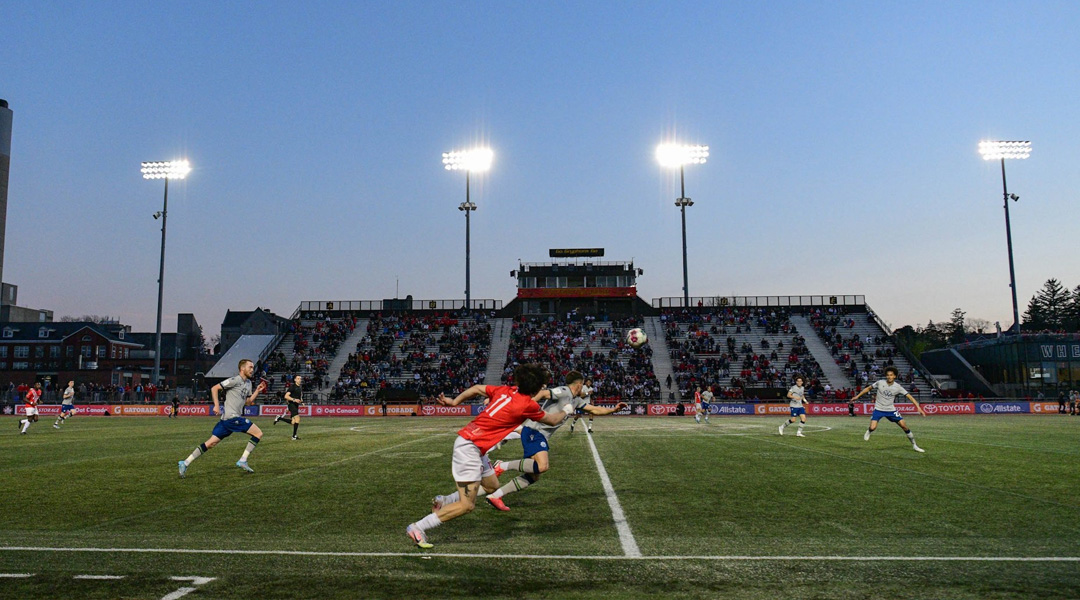 The opening day of the 2022 Canadian Championship saw three of the five preliminary round matches unfold, and they’ve proven to be competitive affairs so far. We’ve seen penalties and cards begin to fly as club’s begin to march forth with one eye on the Voyageurs Cup, while for others the journey ended early.

Without further ado, here’s what unfolded in the Canadian Championship last night:

The reigning League1 Ontario champions put in a good shift against their professional opposition, but a visiting Wanderers side loosed an astounding 22 shots on Svyatik Artemenko. While the newly-returned goalkeeper pulled off several fine stops and parries, he couldn’t stop Akeem Garcia from burying a surprising penalty opportunity earned by Mohamed Omar twenty minutes in:

The Wanderers were unlucky not to extend their lead in the first half, finding a good rhythm as balls trickled in for their forward line. After striking the post a few times, the visitors would go another goal up in the second half following a set piece rocket from the boot of Aidan Daniels.

The final whistle saw Guelph United head coach Keith Mason state he was proud of his team’s efforts, which – despite limited opportunity in the final third – saw them prove to be a competitive side against professional opposition. For the Halifax Wanderers, it was perhaps their most comfortable cup experience against a semi-pro side yet, proving to be less of a bumpy experience than their matches against the Vaughan Azzurri and AS Blainville.

Now moving on to the quarter-final stage, Stephen Hart and his Halifax Wanderers side will get to host Toronto FC two weeks from now.

It was three years ago when Toronto FC Captain Michael Bradley said he was hoping for a trip to Wanderers Grounds, and now he’s gotten his wish: last night’s win means that the Halifax Wanderers will host MLS competition for the first time. With the 6,000-seater venue expected to be packed, it’s going to be quite the away trip in the for last year’s runners-up.

TD Place hosted a tantalizing cup bout between Atletico Ottawa and York United with both sides finding themselves on the scoresheet. It was the Nine Stripes who opened the scoring through Diyaeddine Abzi, who played a more forward role on the on the left flank and blasted in a wonderful strike on the half-hour mark:

Atletico Ottawa head coach Carlos Conzalez made two changes in the early stage of the second half, bringing on ‘Mr. Ottawa’ Carl Haworth and Malcolm Shaw, the latter of whom would net the equalizer with a powering header just minutes later:

The late stage of the second half would see a worrying sight as Austin Ricci went down, prompting concerns over the knee injury that ended his season in this very competition last year.

While the forward was being attended to, a group altercation brewed near the York United bench. Nine Stripes goalkeeper coach Camilo Benzi went for a throat grab on Haworth, earning his marching orders once referees took control of the situation. It was an expectedly chippy affair after that, though the final whistle would end with things all square ahead of a penalty shootout.

Given that Nathan Ingham had played for York throughout the past three years, he was well-familiar with many of his opposition. Martin Nash tried to avoid putting players he knew for his opening kick takers, though it couldn’t be completely avoided as the shootout eventually came down to sudden death after five kicks apiece.

A sequence of stellar finishes from both sides was eventually broken when McKendry fired wide, with Cedric Toussaint stepping up to send the visitors into the quarter-finals:

York United will now travel away to Pacific’s Starlight Stadium in two weeks time, where the club will be 90 minutes away from securing its first ever semi-final berth – though the reigning CPL champions will be quite a hurdle to clear first.

The second Al Classico in just a matter of days saw Tommy Wheeldon Jr.’s side best the Eddies once more, with a highlight first half performance from Myer Bevan seeing the Kiwi score twice: his first came after just seventeen minutes, with the forward flying high in the air to hit an inch-perfect header into the far corner.

The 25-year-old would then tuck away a penalty twenty minutes later, with Cavalry quick to capitalize after a foul from T-Boye Fayia. In just his second start for the side, Bevan went four-for-four in shots on target, having an absolutely stellar night in cup football.

The half-time break saw Alan Koch’s FC Edmonton side come out with fresh wind in their sails, loosing four of their five shots on target and pulling one back through a Tobias Warschewski penalty kick:

Cavalry would hold firm to secure a 2-1 win and, thus, will be advancing to take on either the Vancouver Whitecaps or Valour FC depending on what unfolds tonight.

The 2022 Canadian Championship quarter-final stage will take place two weeks from now. The two confirmed fixtures will see Pacific host York United and Toronto FC visit the Halifax Wanderers, while Cavalry and CF Montreal’s visitors are yet to be decided.

With the first three matches of the preliminary round proving to be quite entertaining affairs, the expectations will be high for the Whitecaps and Valour match tonight, which will be preceded by Forge FC hosting CS Mont-Royal Outremont.