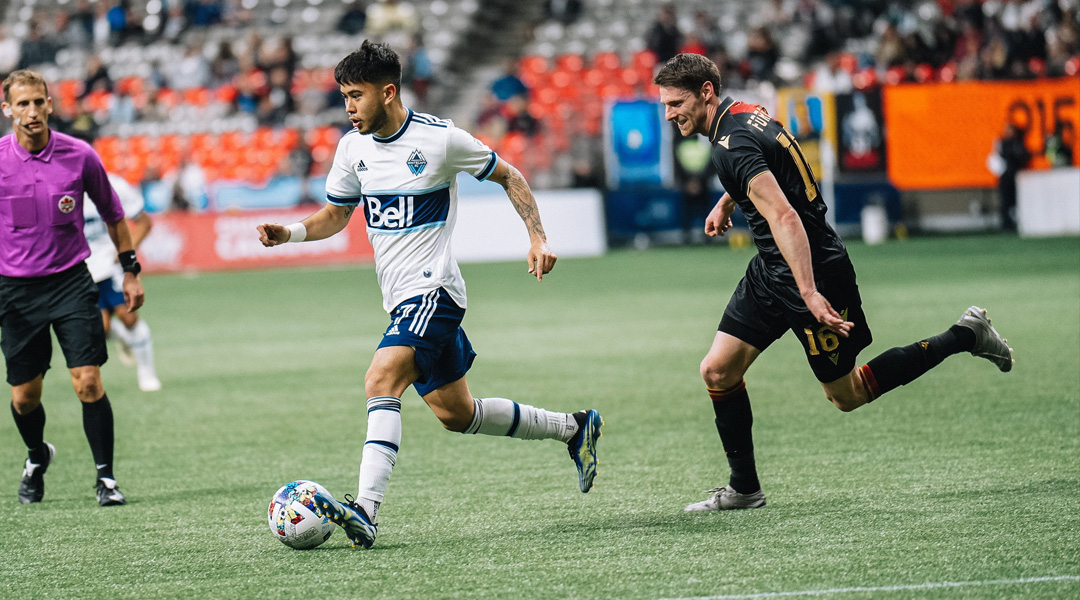 The preliminary round of the Canadian Championship concluded with two matches last night, both of which saw hopes of an underdog story come crashing down early.

With four goals scored across two final knockout cup matches of the preliminary round, we now know which five teams will be advancing to the quarter-final stage. Before looking at what will come later this month, let’s take a look at what all went down last night:

The Whitecaps finally broke their bogey run against CPL teams in Canada’s cup competition, comfortably dispatching Valour FC 2-0 at home. After weathering a strong opening ten minutes from Valour, Vanni Sartini’s side pushed back with some wonderfully-constructed buildup: while debuting goalkeeper Rayane Yesli did well to stop the first shot following a slick backheel, Russel Reibert was there to bury the rebound in the opening twenty:

The next twenty minutes so saw Valour shake under the weight of expectation, and it showed in the club’s defensive shape: with significant gaps open on the left flank, the Whitecaps found Ryan Raposo with miles of space just moments later, and he was all-too-happy to finish a cross in such open space:

Valour would struggle to put any bodies in that left space, with Raposo finding plenty of love out wide much to the chagrin of a Valour side hoping to keep itself in the competition. Yesli kept any further goals out in the first half, though the side wasn’t able to build up much beyond their own defensive line.

The second half saw more of the same with the Whitecaps happy to force Valour into backpasses aplenty. Andy Baquero came on to solidify the backline, but beyond Sean Rea and Moses Dyer the club saw little success going forward. With the visitors unable to bring the tempo back up, the Whitecaps saw out the match after limiting their opponents to just two shots on target.

“It’s good when you learned from a past situation,” said Sartini in reference to the club’s past two cup losses against CPL sides. “There were a lot of players who were with us last year when we lost to Pacific, some of them were with us three years ago when we lost against Cavalry. They knew that we had to do much better, and we did.”

They’ll now advance to face Cavalry FC at Spruce Meadows, hoping to enact vengeance after losing to the Alberta-based side in 2019.

Valour FC will now jump back into CPL action, hosting a second-place York United side this weekend. While Phillip Dos Santos’ return to BC Place didn’t go how he’d hoped, he was very proud of the team for the effort they put forth on the pitch.

The hammers enjoyed a victorious, though not comfortable, home match against semi-pro visitors CS Mont-Royal Outremont.

The PLSQ visitors put out a low block (and a very brave 40-year-old sweeper keeper) that seemed to frustrate the Forge offense, though the home side did break them open in the first half: with Ashtone Morgan back from injury, the left-back made space for himself on the flank and curled in an inch-perfect pass to Campbell, who superbly pinged the ball into the far corner.

Forge hadn’t looked the most comfortable before that, but the moment helped them settle into a rhythm of sorts. They still didn’t procure much by way of clear-cut chances, though neither did CS Mont-Royale Outremont despite some sharp-looking freekicks that, unlike many a CPL set piece, made it well above the first defender.

The match looked to be a one-goal affair before a French connection undid the PLSQ visitors, with a cross from David Choiniere finding Woobens Pacius for his first of the season. With only a few minutes of added time to go after that, the match was more or less done-and-dusted:

While Forge dominated possession, the team will certainly want to push for more clinical finishing in the final third – or, at least, more fluid movement from its attacking line. The PLSQ visitors never looked like scoring themselves, but their defense gave a good account for a semi-pro league that has looked quite dangerous in this competition before.

Given that CS Mont-Royal Outremont hasn’t played one match this season yet, they can away with their heads held high.

“We have a way of doing things and that’s always going to bring us challenges, you are asking for players to constantly make decisions to not allow the opponent to make those decisions for you,” said Smyrniotis after the match. “I think that needs rhythm, that needs games, and maybe that game we missed with Valour a couple of weeks ago and that maybe throws you off. That’s why I always like games every few days. So I got another one in 48 hours.”

Forge FC will now advance to face CF Montreal in this cup competition for the second year in a row, having previously bowed out to them in a semi-final matchup that took eleven rounds of penalties.

The quarter-final stage of the tournament will see three CPL-vs-MLS clashes, with at least CPL team is guaranteed to reach the semi-final stage. In two weeks’ time we’ll see some tasty repeat matchups between both Cavalry FC and the Whitecaps and Forge and CF Montreal, while Pacific FC enters from a bye to host York United. As Michael Bradley has long wished for, his Toronto FC side will finally travel to the Wanderers Grounds to face Halifax.