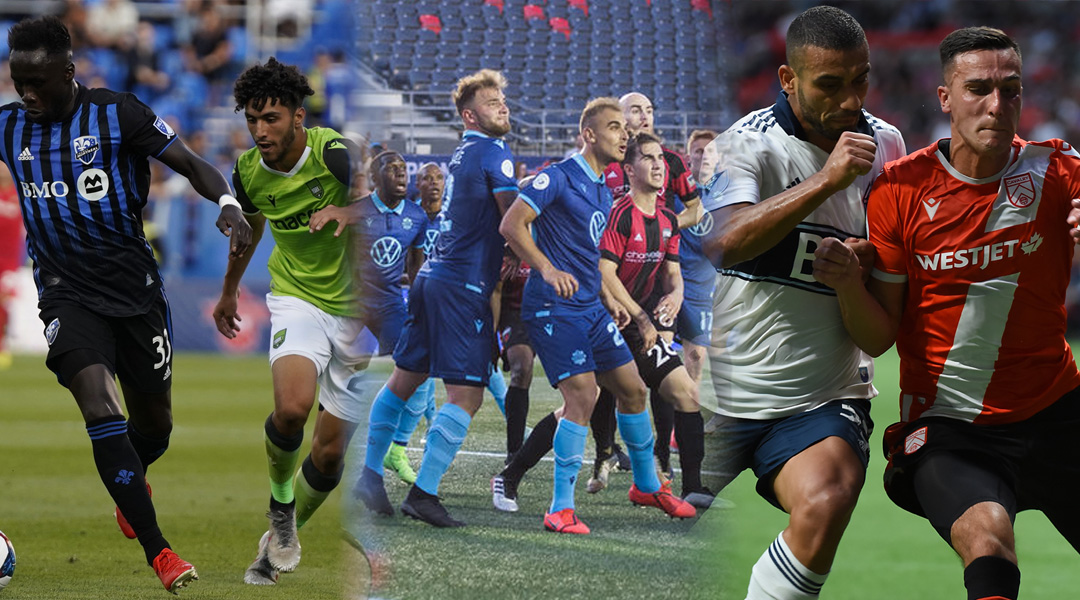 Going into a historic night of Canadian Championship action, there was always one big takeaway: it was anyone’s game. The three Canadian Premier League clubs taking on MLS and USL opposition had kept the scorelines tight-knit in the first leg, making a successful away trip a distinct possibility for any of the CPL sides.

Still, history tipped the odds against those hedging bets in favour of clubs from the young league: neither the Vancouver Whitecaps nor the Montreal Impact had lost at home in Voyageurs Cup action since they became MLS sides, and the Ottawa Fury had an impressive track record at TD Place, too.

What happened next was a defining moment in the history of the competition: for the first time, a Canadian Premier League club would beat its Major League Soccer opposition, though the status quo refused to be tipped in two of the other fixtures after a night of hard-fought games and cagey performances.

Here’s a recap of everything that went down in the Canadian Championship 2019 third round:

The Nine Stripes knew it had quite a task to do in Stade Saputo, as Remi Garde’s Montreal club went into the match with an away goal advantage after a thrilling 2-2 first leg in York Lions Stadium. While Montreal controlled most of the game, it was York9 FC who had the best early chances: ⁠Murofushi played provider on two separate occasions, with the first seeing Toronto FC loanee Ryan Telfer round debutante Impact goalkeeper James Pantemis only to miss the net, and the second seeing Porter glance an effort high from between two defenders.

The lack of clinical finishing came to rue the Nine Stripes when Argentinian playmaker Ignacio Piatti – who was in the midst of a long-awaited return for injury – converted a penalty after a handball call on York9 FC defender Diyaeddine Abzi, who had just returned to the lineup after picking up a knock a week prior against Pacific FC. The scores would remain even for the rest of the game, meaning York9 FC’s first-ever foray into the Canadian Championship would come to an end in the third round.

Overall, I’m proud of these guys. After the match, it was just, get your heads up. You put a good shift in against a good team, you end up losing the game to a penalty.

It wasn’t the fairytail ending that Canadian Premier League fans were hoping for, but the fact that a CPL club went toe-to-toe with an MLS side over two legs and kept the aggregate score agonizingly close is a great sign for the league. For an Impact side which hasn’t won a match in nearly a month, fans will be hoping the positive Canadian Championship showing can help spur a return to form in Major League Soccer action.

The Montreal Impact is now set to to play against Cavalry FC in the Canadian Championship semi-final.

With nine goals over two legs, the neutrals had a field day with the first-ever USL vs CPL showdown. Stephen Hart’s Halifax Wanderers side came out swinging, with Tomasz Skublak controlling the ball well and converting a good chance in the 31st minute. Some 12 minutes later, the travelling Halifax contingent went into raptures when Luis Alberto Perea struck home a shot after a header from Peter Schaale, giving the Wanderers the go-ahead goal and sparking hopes that a CPL comeback story might be on the cards.

The Ottawa Fury had other ideas.

Moments before the half-time whistle, a header from 30-year-old English defender Onua Obasi floated beyond Wanderers Captain Jan-Michael Williams, tying up the aggregate and providing a platform for the Fury to build off of in a less-intensive second half. Haitian footballer Christiano Francois found himself on the end of a lofted ball in the in the 66th minute, and his goal moments later would prove to be the killing blow for a Halifax Wanderers side that suffered its first-ever away defeat in Voyageurs Cup action.

We got into the situation we actually wanted to be in by going 2-0 up and gave up a goal at a crucial time which I think rattled us a little bit. I think we lost a bit of concentration there. We are always aware of players coming in front of us and we paid the price for it.

The Ottawa Fury will now take on Toronto FC in the Canadian Championship semi-finals.

BC Place would play witness to a historic night, but not in the way that Whitecaps fans would have wanted: it took Tommy Wheeldon Jr.’s high-flying Cavalry FC side just seven minutes to break the deadlock from the first leg, with former Arsenal academy striker Jordan Brown sneaking in between two defenders to rifle a shot into the back of the net beyond Whitecaps goalkeeper Maxime Crepeau.

Having conceded an astounding 16 goals in the last four MLS games, the atmosphere at BC Place turned sour as Whitecaps fans found their side struggling against Canadian Premier League opposition. In the second half, Marc Dos Santos might have thought a comeback was on the cards after South Korean youngster Hwang In-Beom’s shot took a deflection to go past Marco Carducci, but these thoughts were short lived: just five minutes later, Cavalry FC defender Dominick Zator would put a header past Crepeau to restore Cavalry FC’s lead. Despite a dangerous giveaway from Carducci minutes later, Cavalry FC would hold on to this lead to win the game.

Our guys have got the heart of a lion. It’s evident to see, in how we’ve done in the CPL. The CPL is for Canadian players, coaches, officials, administrators, the whole gambit. We’ve got a lot of Canadians playing, and we’ll keep forging ahead to 2026 and creating a bigger platform for Canadian players.

This marks the first time a Canadian Premier League club has ever beaten a Major League Soccer club, while simultaneously marking the first time the Vancouver Whitecaps have lost at home in the Voyageurs Cup since it became an MLS club. When combined with the club’s league form and the various club scandals that erupted this year, these are dark times for the ‘Caps.

Cavalry FC is riding high as the CPL spring season winner, and is now poised to take on the Montreal Impact in the Canadian Championship semi-final.