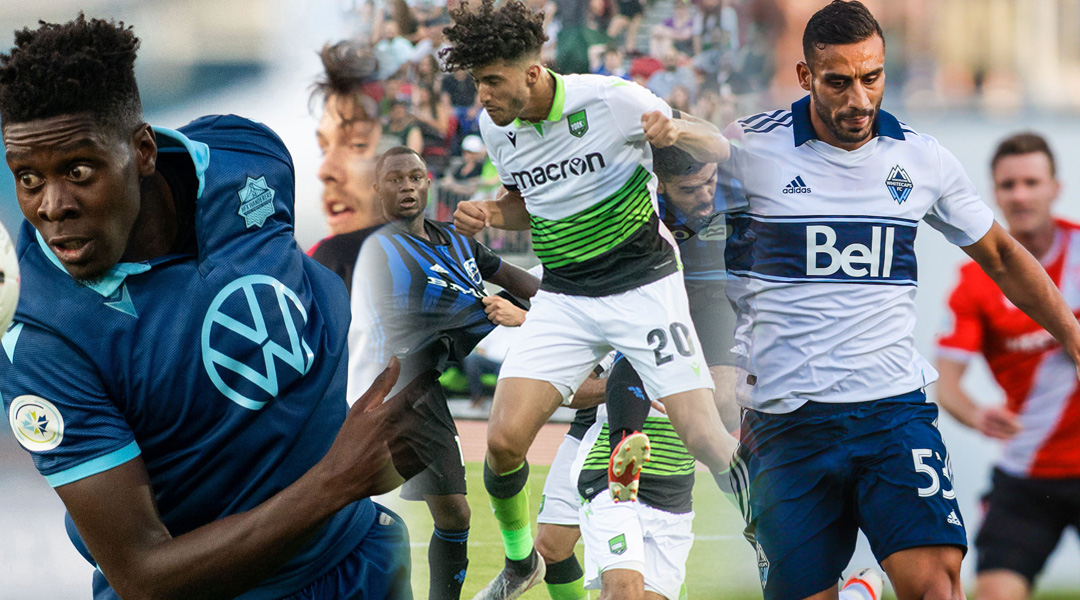 The Canadian Championship will see six Canadian clubs lay it all on the line this Wednesday, with the third round of the domestic cup having already produced plenty of drama in the first leg some two weeks ago.

Let’s take a look at what fans can expect in the first edition of the Voyageurs Cup to ever feature the likes of the Canadian Premier League, with the burgeoning professional league due to see three of its clubs take on two MLS clubs and a sole USL opponent in the third round.

Jim Brennan’s York9 FC side proved it could stand tall against Major League Soccer opposition after having come minutes from achieving a home win against Montreal Impact in the first leg, though a late penalty allowed Remi Garde’s MLS side to finish with a 2-2 draw. A last-gasp strike by Joseph Di Chiara almost handed the Nine Stripes the fairytale ending that the York Region club was looking for, but in the end two individual mental errors at the back gifted Montreal the goals it needed to secure an away goal advantage for the second leg.

With the home fixture seeing a narrower scoreline that Impact boss Remi Garde would have liked, it’s looking like the Montreal gaffer is prepared to take a few risks to ensure his MLS side maximizes its chance of progression. Fans attending the match at Satade Saputo may see Ignaccio Piatti – who has contributed an astounding 75 goals in 153 appearances for The Impact – clock in a few minutes of game time as he continues through an injury-plagued season. When fit, he’s one of the club’s most dangerous entities.


It’s not all the usual eleven, though, with IMFC Radio host Gavino De Falco stating that James Pantemis is expected to get his first-ever start for the Impact. The 22-year-old Canadian is a product of the Montreal Impact Academy and was born and raised in Montreal.

Former Arsenal right-back Bacary Sagna, who did not travel with the Impact for the first fixture between the two sides, stated that his club must respect York9 FC. His words echo those of Samuel Piette’s, who said after the first leg that the quality of Canada’s only professional domestic league was high.

We expect this cup to get bigger and bigger and more prestigious every year. I was very fortunate as a player to win the Canadian Championship, but now I want to win it with York9. We’ve got a good squad, and a great opportunity to do this. Montreal Impact are a great team, and they’re well organized. The organization is first-class. Joey has done a hell of a job with the Impact in building that stadium and getting them to where they are today. It’s up to us now with the Canadian Premier League go individually take our own clubs, and start pushing them up and get them on par with MLS.

Jim Brennan’s club featured a heavily rotated roster for it’s midweek win over Pacific FC, but yielded most of its usual starting line-up for a slim 1-0 loss to Cavalry FC this Saturday. Having spent a good portion of the week travelling, it’ll be interesting to see how much energy the club can put forward after consecutive weeks of both midweek and weekend matches. CPL fans can expect to see Montreal-born full-back Diyaeddine Abzi return to the Nine Stripes’ starting line-up after a knock prevented him from travelling to Calgary for York9 FC’s last away trip.

For Brennan, the message is simple: the club needs to win. In order to do that, it’ll need to avoid making the individual mental mistakes that gifted Montreal two goals already – and it’ll need to make its chances in front of net count. All told, achieving a result away from home isn’t out of reach.

Marc Dos Santos fielded a strong MLS lineup for the first leg between his Vancouver Whitecaps side and Tommy Wheeldon Jr.’s CPL-based Cavalry FC. Despite the respectful roster, the Canadian Premier League spring season winners held their MLS opposition to a nil-nil draw at Spruce Meadows, leaving it all to play for in an away leg that the club is flying fans out to.

With Cavalry FC goalkeeper Marco Carducci leading the CPL in clean sheets and being a former Whitecaps man himself, one has to feel as though there’s a point to prove for the 22-year-old goalkeeper.

Now, to be able to represent my hometown and have the chance to play at BC Place vs The Whitecaps is exciting more than anything. I think it’ll be a great experience, but at the same time, we’re just set on winning that game.

While Cavalry FC is flying league high in its respective league, the Vancouver Whitecaps are doing the opposite. The club has conceded an astounding 16 goals in its last four league games, a feat which defender Doneil Henry describes as “a nightmare that’s never ending”.

Club attendance has been rough, with a combination of poor form, sexual abuse allegations involving a women’s team coach and underage players, and a racial scandal having all combined for a distasteful atmosphere that has kept seats empty. Even with the ‘Caps offering season ticket holders free tickets for the home leg, it looks like there’ll still be plenty of room at BC Place to spare – which creates an atmosphere that may not do the home side many favours.

With Cavalry FC going into the match on even footing – and now with any away goals counting in the CPL side’s favour – the Calgary-based club is in the best position out of any Canadian Premier League team still in the Voyageurs Cup.

USL side Ottawa Fury has been on a drastic rise through the USL table, and that good form carried over in the first leg of the current Canadian Championship round: they were the only team to walk away with a win, having seen out a thrilling 3-2 victory over the Halifax Wanderers.

With Ottawa having out-possessed and out-shot their opponents in the first leg, Fury head coach Nikola Popovic will feel like his club should be able to do the job at home. TD Place has been home to some historic wins for the Fury, including a 2-0 win over the Whitecaps in 2016 and a 2-1 win against Toronto FC in 2017.


Still, the Wanderers have proven they’re a force to be reckoned with, though the Halifax-based club’s away form leaves a lot to be desired. It still has yet to win away from home in the league, with the Voyageurs Cup providing its only away wins against Vaughan Azzurri and Valour FC respectively.

To that end, Popovic has already warned his home side against complacency:

We are very focused on this match. Everyone has to understand that if we look at this round as one game, we’ve only really played one half. And you don’t win anything in life by only winning the first half. We have to play the second half. We have to be very serious, very responsible. We’ll have to be the best version of ourselves, knowing that we have an advantage but still having to play the second part of that game.

It’s clear that Halifax Wanderers head coach Stephen Hart – who was once considered for a management position at the Ottawa-based club – has a lot to do. Individual mistakes led to Ottawa Fury putting multiple goals past former Trinidad & Tobago captain Jan-Michael Williams, and much like York9 FC, Hart will need to make sure that his backline remains focused for the full 90 while the offensive players keep chugging along.

The immediate takeaway from all three fixtures is that it’s still anyone’s game: the scorelines have been kept narrow enough that a strong away performance from any of the Canadian Premier League teams could provide a historic upset.

Still, neither Ottawa Fury or any of the two Major League Soccer sides will make this an easy task, and history is on their side: neither the Impact or the Whitecaps have lost a Canadian Championship home game since joining MLS, even if the aggregate hasn’t always gone in their favour.

All told, another night of drama and uncertainty is on the cards for the Voyageurs Cup – and that’s just what CPL fans will be hoping for.