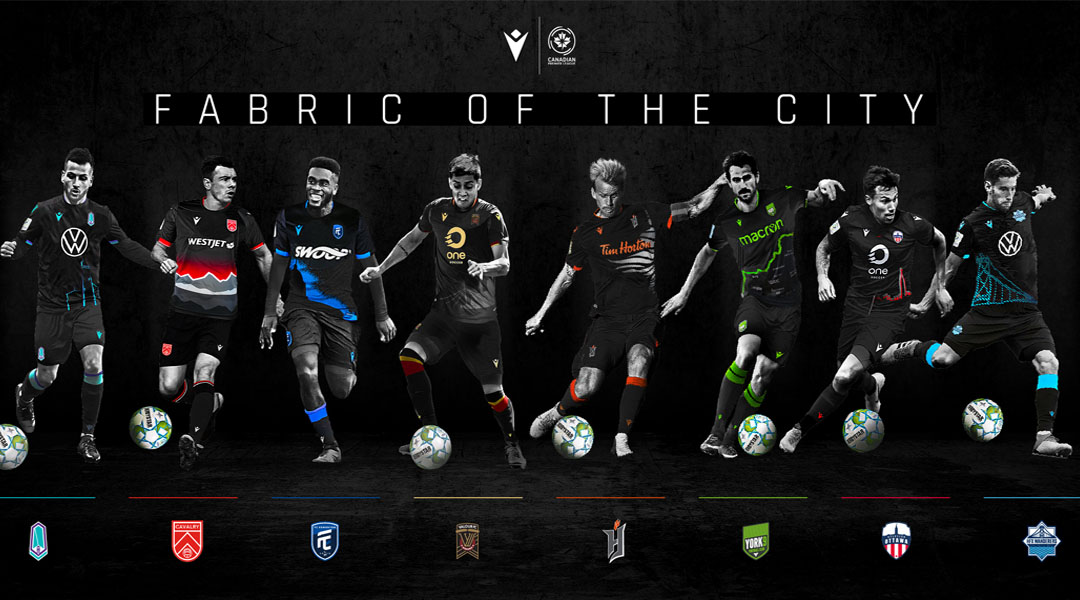 It’s been some 154 days since the Canadian Premier League revealed this year’s home kits for its inaugural clubs (with expansion side Atletico Ottawa revealing its own in May), and today the league has revealed the 2020 away kits for all eight CPL sides.

After months of waiting, things appear to have gone into overdrive ever since the 2020 Canadian Premier League season was confirmed yesterday: the league only first teased the arrival of its 2020 away kits yesterday, with the head office wasting no time in driving additional kit sales ahead of the season’s launch two weeks from now.

Without further ado, here’s a teaser video for the league’s away looks for The Island Games:

As has long been rumoured, this year will see all eight away kits feature a predominantly black look, with each team featuring an accent in club colours honouring part of each side’s respective home.

Here’s a quick breakdown of what accents each club has for their black away kits this season:

The first-ever Canadian Premier League expansion side was the only club to reveal its home kit separately this year, but the side was able to reveal its away look with the rest of the group this time around.

Atletico Ottawa’s away kit features a nod to the city, with a silhouette of Parliament Hill accenting the black look and the back of the kit also featuring a shout-out Atletico Madrid’s newest partner location.

The spring and fall season winners from 2019 will boast The Rocky Mountains on their away kit this season, with a red-and-white colour accent with both solids and gradients contrasting with the black. The back design features the text of Calgary under a gradient.

The Eddies away kit will honour the Alberta Legislature Building that rests along the west bank of the North Saskatchewan River. The familiar sight of blue is complimented in the accent, with the Rally Rabbit ever-present on the back of the kit. If all goes to plan with further league expansion, this won’t be the only time that Saskatchewan gets mentioned by the CPL.

The reigning Canadian Premier League champions will see their black away kit feature Gore Park Fountain, with a shout-out to the city of Hamilton featured on the back. While the club boasted a black-and-gold third kit choice last year, this time black is the de facto choice for days when the clubs wears the away kit.

The Island Games may have a bridge of its own in the logo, but The Wanderers are honouring a bridge of their own: the Macdonald Bridge finds itself displayed in a striped accent complimenting the away look for Stephen Hart’s east coast side.

Head coach Pa-Modou Kah‘s new side will feature the Fisgard Lighthouse for their away look this season, with the club’s primary colours incorporated in a sharp-looking accent. The back of the kit features a shout out for the Isle.

Valour FC took inspiration from the city skyline for its 2020 away look, with the particular outline of the Provencher bridge, Canadian Museum for Human Rights and Fort Garry being featured. The back of the kit features Winnipeg in a familiar harvest gold.

Club President Angus McNab may be considering a branding change, but the identity of the Nine Stripes away kit for this season features a regional map honouring the nine municipalities that make up the York Region. With multiple text portions across the kit, this one certainly feels like the outlier of the bunch in terms of design.


The 2020 Canadian Premier League season will kick off on August 13, 2020 with reigning champions Forge FC taking on last year’s runners-up, Cavalry FC. The full season schedule is expected to drop in the very near future, with all matches from The Island Games currently available exclusively on OneSoccer.

While some clubs like the Halifax Wanderers and York9 FC have stated that their rosters are complete, other clubs like Atletico Ottawa, Forge FC, and Pacific FC still have multiple spots that could be filled up ahead of the league’s second-ever season. When the league kicks off next month, there’ll be no shortage of new faces looking to cement their place in Canada’s own domestic football league – though with this year’s regular season seeing clubs only play seven games each, some of the league’s new away kits will only make a brief appearance overall.

Fans interested in purchasing any of the away kits can do so on the official store here.