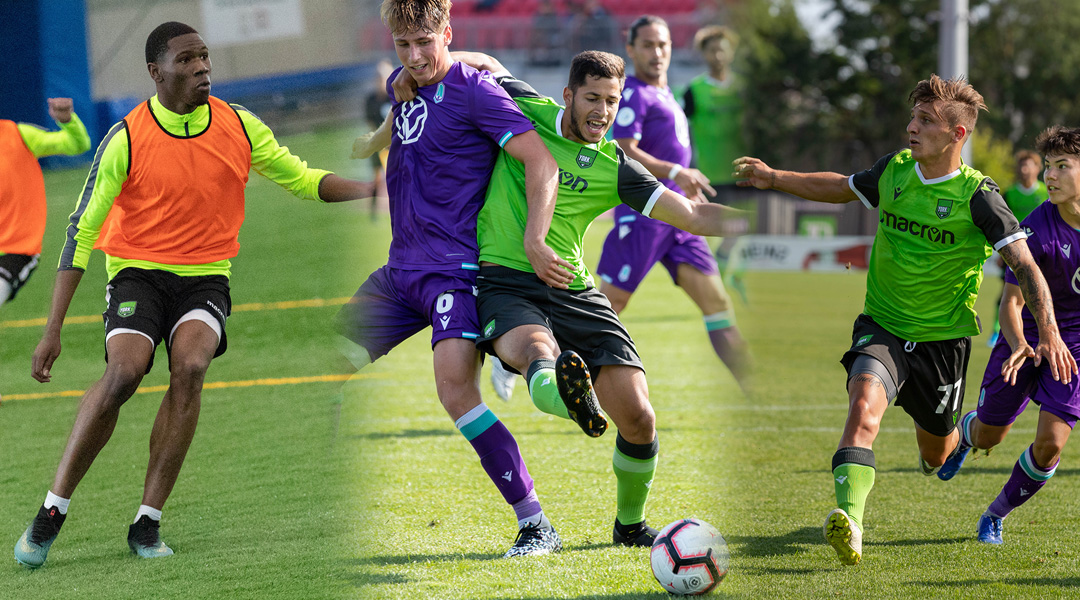 The 2020 Canadian Premier League season will kick off in just over a month, which means that most clubs are in the final stages of wrapping up their rosters. The end of the inaugural season saw plenty of talented Canadians get released late last year, and there’s a high likelihood that some of these players may land at a different CPL side for 2020 – in fact, some of those released players already have.

Former York9 FC striker Cyrus Rollocks may be oft-remembered for being misidentified as the league’s first-ever goalscorer, but the 22-year-old former Canada U-17 striker is keen to give himself a fresh start with his former club’s nearby rivals, Forge FC.

After starting the first two matches of the season for Jim Brennan, Rollocks soon found himself used quite sparingly in the spring season, with the Toronto local then being out of the matchday squad entirely for almost all of the fall campaign. A second chance appeared to be opening when he was selected for the travelling squad ahead of a stretch of away games, but Rollocks picked up a knock five minutes into the first of those matches, with the untimely injury ultimately spelled the end of his playing time with the York Region side. He made 13 appearances in all, clocking in just 313 minutes of game time without scoring a goal for the York Region side.

Forge FC head coach and general manager Bobby Smyrniotis had said he’s looking to sign attacking players, and a fresh start just might be what the former TFC2 and Master’s Futbol Academy youngster needs – assuming he can force his way into a lineup which only made its first brand new signing of the year a few days ago.

Barrie-born midfielder Steven Furlano – who can play on the wing, as a defensive midfielder, and can also slide in at right-back – was a versatile player for Jim Brennan. The former Toronto FC Academy product was the only released Nine Stripes player aside of Daniel Gogarty to clock in over 1,000 minutes of gametime last season, and it’s agreeable that he gave his all on the pitch: his tackles went in with vigor, which might explain why he earned 4 yellow cards in his 18 appearances.

Furlano was a largely unused substitute coming into the final stretch of the season, but just when Brennan said that players were now playing for their jobs, Furlano got his chance: he came off the bench to contribute an assist in the York Region side’s convincing 4-0 win over Forge FC, and then followed up the performance with an assist the next week against Valour, which earned him some playing time in the closing game of the season.


Furlano found himself in a tough spot: he wasn’t going to start as a right-back ahead of Morey Doner, and the club evidently believed it could better spend a portion of its salary cap elsewhere than on a depth utility midfielder who, for the 2020 campaign, won’t count as a domestic U-21 player. Thus, Furlano finds himself trialing with a Cavalry FC side that still has a few roster spaces to sort out.

York Region’s own Austin Ricci was an interesting prospect coming into the inaugural Canadian Premier League season, with the 23-year-old expected to offer a goalscoring threat from the wing and the front end of a Nine Stripes attacking line.

Ricci had an impressive resume: he was a frequent goalscorer with NCAA side Oakland Golden Grizzlies, where he contributed 22 goals and 7 assists in 71 appearances. He then jumped to PDL side Flint City Bucks, where he collected an amazing 12 goals and 7 assists in just 14 appearances. Returning to Canada, he then scored five goals in eight appearances for League1 Ontario side Vaughan Azzurri before signing a contract with York9 FC, who held the local player in high regard.

Unfortunately, Ricci never got to collect the minutes to prove his worth: he made just 11 short appearances under Jim Brennan, and never clocked in a full ninety minutes. With the starting striker position ultimately going to Adjei or Gattas and the right wing frequented by Kyle Porter, Austin found himself surplus to requirements when the season concluded. His sole assist of the year came in the tail end of the spring season against Valour FC, for whom he may be suiting up for next year.


Around the league, there’s likely to be plenty of more trials going on behind closed doors. Cavalry FC has disclosed that former signing Victor Loturi is trialing with the side, while the Calgary club’s former man Tofa Fakunle is trialing with Valour alongside Austin Ricci and the former Wanderers defender Chakib Hocine. While those clubs are highly public with such trials, sides like Forge FC have kept things much more under wraps.

It’ll be interesting to see if any of the three former York9 FC players mentioned above find themselves landing elsewhere in the Canadian Premier League next season. With plenty of intra-league transfers having already unfolded, fans should expect to see a wide range of receptions for athletes like Louis Beland-Goyette, Marco Bustos, and Michael Petrasso.