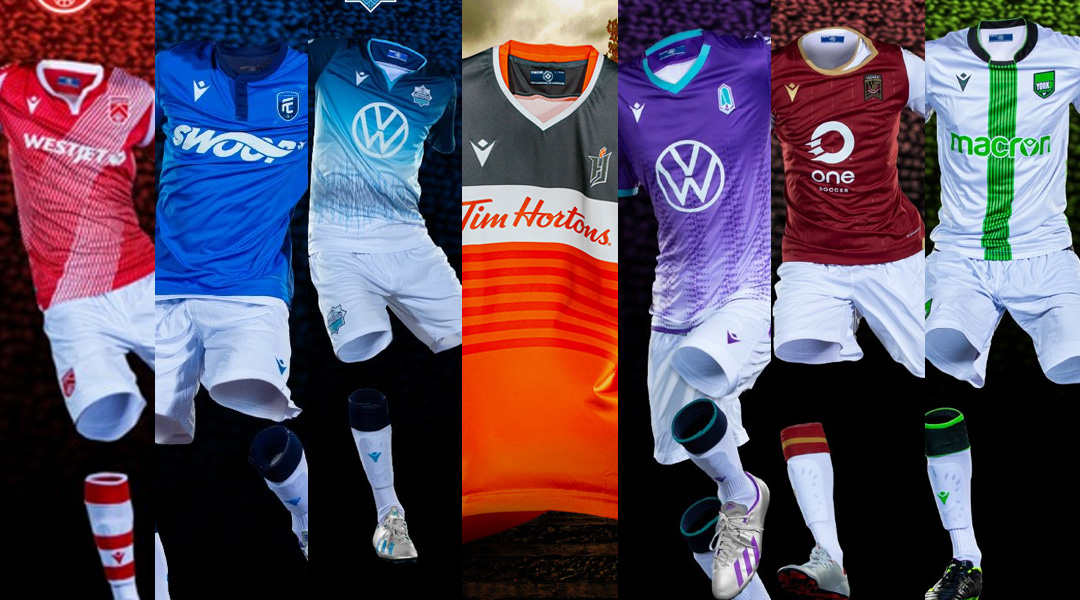 The seven inaugural CPL sides will sell their authentic home kits for $119.99 CAD, with youth kits available for $79,99. Fans can get customized names on the back for an additional $34.99 on the official CPL shop.

Here’s a look at the new drip from all seven clubs who revealed their home kits today:

Cavalry FC has changed up its history-making slash by adding a new striped styling, which is a far cry from the solid colours of 2019. The spring and fall season winners will be hoping the new striped gradient look will host more history as Tommy Wheeldon Jr.’s side aims to head to the CPL Finals and make amends for last season, with the slash still paying tribute to Lord Strathcona’s Horse Regiment uniform.

The back of the kit will also feature a large ‘C’ on the back, representing a horseshoe that plays homage to both Calgary and the club’s home grounds at Spruce Meadows.

The classic-feeling Eddies kit is heavily influenced by the club’s tenth anniversary. FC Edmonton will don a Royal Blue kit for the 2020 season, with the club crest being backed by a the roman numeral ‘x’ to mark the occasion. There’s also a large X on the back of the kit that features the iconic rally rabbit, too.

Notably, FC Edmonton becomes the first Canadian Premier League club to switch kit sponsors: the 2019 season kits featured OneSoccer on the front, with Swoop Airlines now establishing itself as the new Eddies kit sponsor. The company is a subsidiary of WestJet, who are league-wide sponsors and feature on the Cavalry FC kit.

The reigning Canadian Premier League champions will see a drastically different kit design for this upcoming season: gone are the Sparx-inspired decals with a large tri-tone colour scheme: the bottom half of the kit features orange tonal stripes, with six horizontal stripes representing the regional municipalities of Ancaster, Dundas, Flamborough, Glanbrook, Hamilton and Stoney Creek. The kit then breaks into a large stripe of white, with the bottom switching to a deep gray.

The 2020 club kit will also feature a special commemorative Canadian Premier League badge on the sleeve by virtue of Forge FC lifting the North Star Shield.

The Halifax Wanderers have a drastically different home kit for the 2020 season, with music playing a big role in the kit’s design. A soundwave of the famous Stan Rogers tune Barrett’s Privateers now features predominantly on the kit, which itself features a gradient from white at the bottom to blue at the top. On the back lies the club’s mantra, ‘Together From Aways’.

West coast Canadian Premier League side Pacific FC is not only keeping its Starfish Purple colour scheme for 2020, but it’s adding to it: a new stripe design featuring star fish can be seen amidst a new gradient style that runs from white to purple. On the back is Poseidon’s Trident, another symbol often used by the club.

Valour FC offers fans one of the more subtle refreshes in the league: the burgundy-and-gold core section of the kit features wider gaps between a thin pin stripe, with the black sleeves being replaced by a sleek white look. Valour FC is going with a double neck collar this year, with the back of the kit featuring the famous Golden Boy from the Manitoba Legislative Building with the number 150 to celebrate Manitoba’s sesquicentennial year.

While many fans had assumed that this week’s kit teaser meant that the Nine Stripes were going green for the home kit, the York Region club is instead going for a solid white background that features nine vertical green stripes running down the middle that represent the nine York region municipalities, along with a black collar. The back of the kit features a shoutout for the municipalities of Aurora, East Gwillimbury, Georgina, King, Markham, Newmarket, Richmond Hill, Vaughan and Whitchurch-Stouffville.


With seven of the eight Canadian Premier League clubs now having revealed their home kits for the upcoming season, it’ll be interesting to see if the away kits are jarringly different. To that end, the league has simply said that each club’s away kit would be revealed at a later date, though with the league kicking off on April 11 and preseason for most clubs due to begin in a matter of days, one has to imagine that this reveal will come sooner rather than later.

While Atletico Ottawa has remained tight-lipped about its home kit design, it is expected to closely resemble the red, white, and blue kit of Atletico Madrid – though fans will need to wait an undetermined amount of time to see either the home or away kit for the newly-founded CPL side.