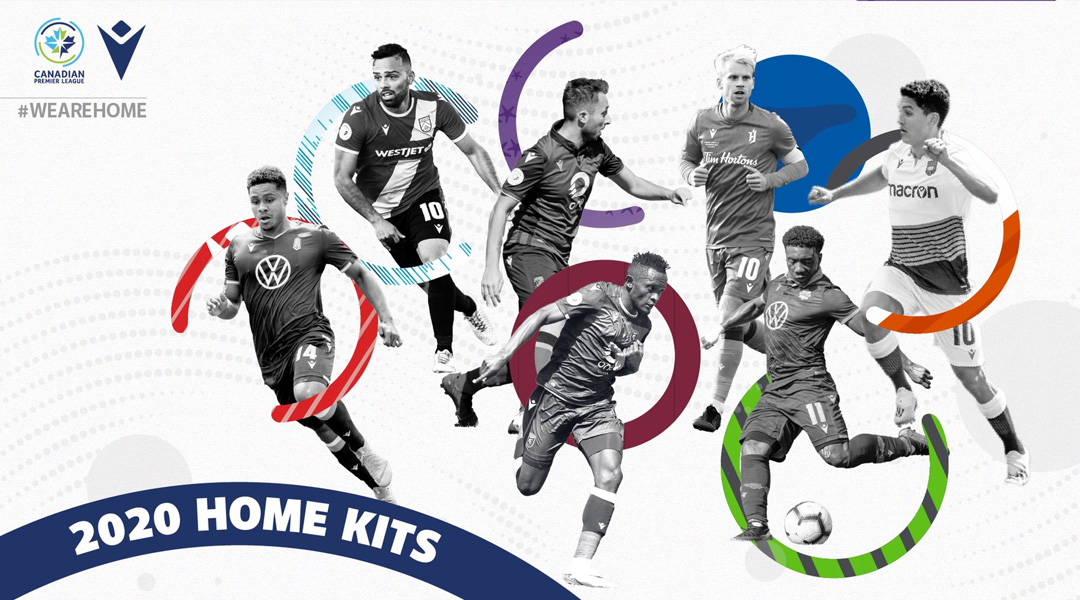 Today, seven of the eight Canadian Premier League clubs have given a subtle look at their 2020 home kits, which are set to be unveiled at local events from coast-to-coast on Thursday, February 27. The league made a similar marketing move last year, teasing the inaugural home-and-away kits in a sole Instagram post in the same week that the league unveiled them.

Only newly-founded expansion side Atletico Ottawa did not take part in today’s teasers. It’s unclear if any of club kit sponsorships will change with the arrival of the new kits.

Without further ado, let’s take a look at what we can gleam from the teasers we’ve seen so far:

Cavalry FC: The Slash Gets Slashed

It appears as though the slash style of Cavalry FC has made way to the pasture, with a new red-and-white striped home kit due to make an appearance in two days’ time. While the club looks like it will be keeping its home kit colour scheme largely unchanged, the switch to thin stripes is certainly a large departure from the sole white slash styling that made history last year.

The 2020 Eddies home kit will feature some familiar blue waves of colour, though it’s unclear if the if the chest-high swath of the Saskatchewan river will flow into the Alberta-based club’s new drip. Rumours about a potential ‘X’ in the design to celebrate the club’s ten year anniversary have persisted, while the the rally rabbit shown in the middle of the above stripe confirms the return of an iconic club figure.

All-told, this looks to be one of the league’s more subtle kit refreshes, though FC Edmonton fans will need to wait until Thursday to see if there are any big surprises hidden in all that blue.

Forge FC: The Hammer Is Home

The Forge FC 2020 home kit appears to adopt tonal orange horizontal stripes that are fairly wide, suggesting that the spark pattern of the club’s inaugural kit is a thing of the past. As the reigning holders of the North Star Shield, it’s also expected that the kits will feature a commemorative badge for the upcoming season, too.

With Forge FC having been the only club to release a third kit last year, it’ll be interesting to see if the club repeats the gesture come 2020 – or if black-and-gold may simply end up being the club’s away colours of choice.

Update: While unconfirmed, there was a supposed leak of the Forge FC kit that has some unexpected colour twists. It can be seen here, for those who want to see it.

Halifax Wanderers: Coming Sing With Us

The new Halifax Wanderers home kit appears to be a drastic departure from the the club’s original home kit, which featured a deep blue chest with a subtle Halifax citadel pattern. This time around, the club will don a waveform-inspired uniform that goes over what appears to be a predominantly white background.

Halifax Wanderers President Derek Martin had previously teased that the club’s 2020 home kit will tie in with music and how important the atmosphere is at Wanderers Grounds, describing the design as the club grabbing hold of the ‘come sing with us’ feeling.

The west coast Canadian Premier League side had one of the most visually-appearing inaugural season home kits, but the purple wave is in for a drastic makeover: the new Pacific FC home kit will feature strings of starfish patterns, which ought to make the club’s mascot fit right in.

Valour FC: A Search For Consistency

Winnipeg-based Canadian Premier League side Valour FC looks to be one of the only sides not drastically shaking up its home kit, with familiar vertical stripes once again returning – albeit in a new, more widely-spaced thin stripe styling. As evidenced in the above photo, the gold styling of the Macron logo will be making a return once more, with the 2020 Valour FC home kit looking to be more of a subtle refresh rather than a stylistic overhaul.

The Nine Stripes appear to be stepping away from white as the club’s primary home colour, fully embraced the green-and-gray stylings that made the away kit a popular choice among fans – and one more in line with the club’s branding, too. While the inaugural home kit featured nine stripes on a rising surface (representing Ontario’s ‘rising star’ motto), 2020 will see the club switch to vertical stripes for its home uniform.


It’s going to be interesting to see how the full kits look, which may also determine if the colour of shorts will change to compliment the new tops. Whatever happens, Canadian Premier League fans interested in checking out the new 2020 home kits should keep watch during the evening of Thursday, February 27, 2020, when the seven founding clubs (we’re not certain on Atletico Ottawa) will unveil their home kits from coast-to-coast.