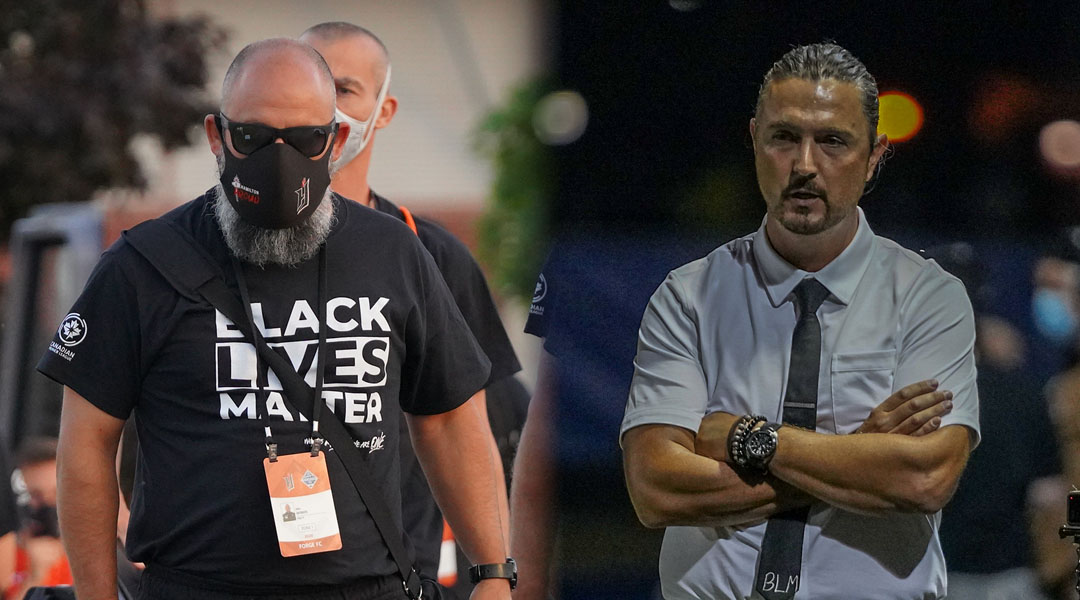 The 2020 Canadian Premier League season opened with a rivalry clash between Forge FC and Cavalry FC, with the two sides engaging in a physical, hotly-contested match which ended in a 2-2 draw after a controversial penalty decision.

Smyrniotis wasn’t about to walk himself into trouble by contesting referee’s call, simply stating that if the referee thought it was a penalty, his side wouldn’t be able to change that. Later on, the Forge FC gaffer would be a bit more emboldened, mentioning that if VAR eventually came to the CPL it would improve the game, specifically in circumstances like Samuel’s penalty giveaway.

While he wasn’t happy to see three points turn into one in added time, there were a lot of positives that the Forge FC boss will take from last night’s match:

[If] you look at the overall picture, I think I’m happy with the guys. The one thing I already told them is that this was our first competitive match in ten months. The pace is good, the football is good, I thought we were slow to come out of the game and they [Cavalry FC] were actually pretty good in the first twenty minutes, but after that we settled in and we played some good football, put the ball around, thought through our processes, then we were down one-nil and came back and scored two goals, so I think we did an excellent job that way.

Yesterday, Smyrniotis waved away the idea being the reigning champions brings a significant advantage, stating that 2019 was done and his focus was solely on what happens in Charlottetown, PEI for the bubble tournament. Now that many of the club’s twenty-two players saw competitive action – though Jonathan Grant went off with a knock – Forge FC only has three days before it returns to league play once more.


The Forge FC attacking line saw Anthony Novak, Chris Nanco, and Marcel Zajac earn the starts last night, and by the time the final whistle came that front three was David Choiniere, Kadell Thomas, and former Toronto FC man Mo Babouli. To that end, Bobby says that his side’s depth will make a big difference over the duration of the seven game regular season, stating that he has players on his bench he feels would be starting for other sides.

The club gaffer was pleased with Paolo Sabak – who occupied an attacking midfield role high up the pitch – and substitute Mo Babouli, who began the piece of play which saw team captain Kyle Bekker head home the club’s second goal.

Meanwhile, Cavalry FC gaffer Tommy Wheeldon Jr. said that his team never felt like second fiddle to the hammer following their CPL Finals defeat last year, and commended his squad for their resilience in not giving up after going a goal down.

We just kept going and kept putting it into good areas, and there’s going to be so many things that we can try to adjust before Sunday, but now we’ve got the game out of our system, now we know the balance, now we know what it’s all about and we’re looking forward to building from this. It’s a point on the board and we’ll build. That’s it. Forge are a bloody good team, and I think they’re going to give other teams a run for their money as well.

While Tommy Wheeldon Jr. said he wasn’t surprised at the physicality between the two sides – “It’s Forge and Cavalry,” he laughed, head coach Bobby Smyrniotis felt that perhaps the tough, physical challenges seen last night went beyond the scope of the game at times. Still, both gaffers seem to recognize that there always seems to be fireworks when the two sides meet.

I felt for the referees afterwards because I think they always had their whistle in their mouth. Sometimes the game looked a little bit more like the ping pong we’re playing in the hotel than it did football, but we’ll grow from it, there were some really good moments and really good goal action.

The well-dressed gaffer went on to say that he doesn’t care if the points he earns are pretty or gritty, so long as they count on the board for the shortened tournament. Tommy was awarded for testing his club’s depth in the second half, with substitute full-back Mohammed Farsi winning his side a last-gasp penalty that was converted by Nathan Mavila.


Much liked Eddies gaffer Jeff Paulus, Wheeldon Jr. likes the fact that the five substitute rule allows him to give youngsters like Farsi, Simmons, and Pepple game time while also bringing on veterans like target man Marcus Haber.

It was nice to get them minutes. I think that five sub rule does it, because it gives them a taste and a sample of what it’s like. We’ll assess the boys tomorrow, and we’ll assess them on Saturday, and then we’ll go again Sunday. Now we’re out, and I think that’s the pleasing part of it, and we’ve got some points on the board and we’ve got goals. I mean, another great goal from Zator, he just keeps collecting them.

With the opening league match of The Island Games now done and dusted, competetive action will resume again this weekend with York9 FC taking on Atletico Ottawa and the Halifax Wanderers taking on Pacific FC this Saturday. On Sunday, Cavalry FC will return to action against Valour FC, while Forge FC will square up against FC Edmonton. Some of those matches will be available on CBC Sports and CHCH TV in addition to OneSoccer.

Given that the broadcast quality of the match seemed good last night, it’s likely that the Canadian Premier League will be shifting some of its other weekday matches to more favourable evening time slots, too.