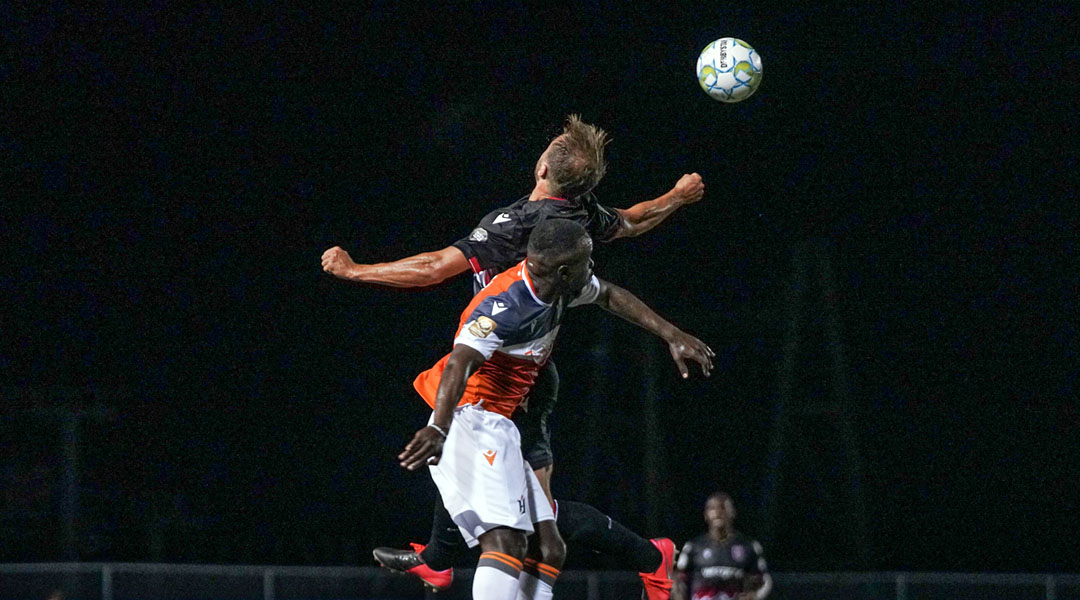 Once both sides took their part to support the Black Lives Matter movement during kickoff, the gloves came off: tonight’s testy match saw five yellow cards doled out as a combination of matchday rust and a rivalry atmosphere contributed to some heavy and late challenges, though the highlight of the match was undoubtedly the sharp finishes seen from both sides.


2019 spring and fall season winners Cavalry FC would be the first side to strike when a well-placed set piece found the head of six-foot-two defender Dominick Zator, who proved himself a real aerial threat in the 2019 campaign. Eleven minutes into the game, Cavalry FC had the lead that they couldn’t get in last year’s CPL Finals.

21-year-old Belgian midfielder Paolo Sabak – who was the only new signing to start in this match – impressed in a high midfield attacking role that saw his tricky footwork cause trouble for the Cavalry FC defense.

The first half saw plenty of back-and-forth action, with Forge FC equalizing in the 26th minute after a loose ball bounced upwards in the box and allowed Novak the space he needed to volley home a close shot from a difficult angle.

Pasquotti proved to be force to be reckoned with on his flank, with Jonathan Grant continually finding himself in space on opposite side. Despite both players being involved in attacks, the first half ended with one goal apiece.

The second half got off to an eventful start, with Ledgerwood – who scored three for his team in league action last year – missing a long shot by mere inches, with Camargo following suit later on.


Set pieces would prove a danger once again when a quick pass to Kyle Bekker outside of the box would see his shot take a sudden deflection and ping off the crossbar, echoing the first leg of last year’s CPL Final when Bekker hit the woodwork there, too.

The Forge FC Captain made good on his next chance, giving the hammer its go-ahead goal in the 71st minute. Bekker pummeled the ball into the net with a diving header after a wonderful sequence of passes from substitutes Mo Babouli and David Choiniere.

Ten minutes later, new Cavalry FC man Marcus Haber would test Triston Henry with a powerful close range header, but couldn’t find a way past the 26-year-old goalkeeper. With Haber standing at six-foot-four, he’s likely to be a frequent sight for the Alberta-based club when they’re seeking a goal late into a match.

Controversy reigned in extra time as Cavalry FC full-back Mo Farsi earned his side a last-gasp penalty after pinging a shot off the side of Forge FC defender Dominic Samuel, with the ball then ricocheting off his raised arm. The referee whistled for a handball and awarded a penalty, though there was some immediate debate as to whether the call was truly a handball.

Cavalry FC defender Nathan Mavila would convert the penalty to earn Tommy Wheeldon Jr. a draw at the last:

As the final whistle blew, Cavalry FC will perhaps be the happier of the two sides after clawing back a point in courtesy of a last-gasp controversial penalty decision. At the end of the day, one thing is certain: Forge FC and Cavalry FC seem to never fail to bring the drama.

Anthony Novak suggested that the referee initially waved away the penalty call, but reconsidered on advice from the fourth official. Whoever ultimately made the call, they certainly created the opening game’s biggest talking point.

It was competitive. A bit of transition. Some tired legs, a few guys that had a cramp. It’s always good playing against Cavalry, it’s always a good battle, and obviously disappointing we didn’t come away with that.

This weekend will see the Island Games action continue with double headers on both Saturday on Sunday, with select matches available on both CBC Sports and CHCH TV. As always, every Canadian Premier League game is available live on OneSoccer.